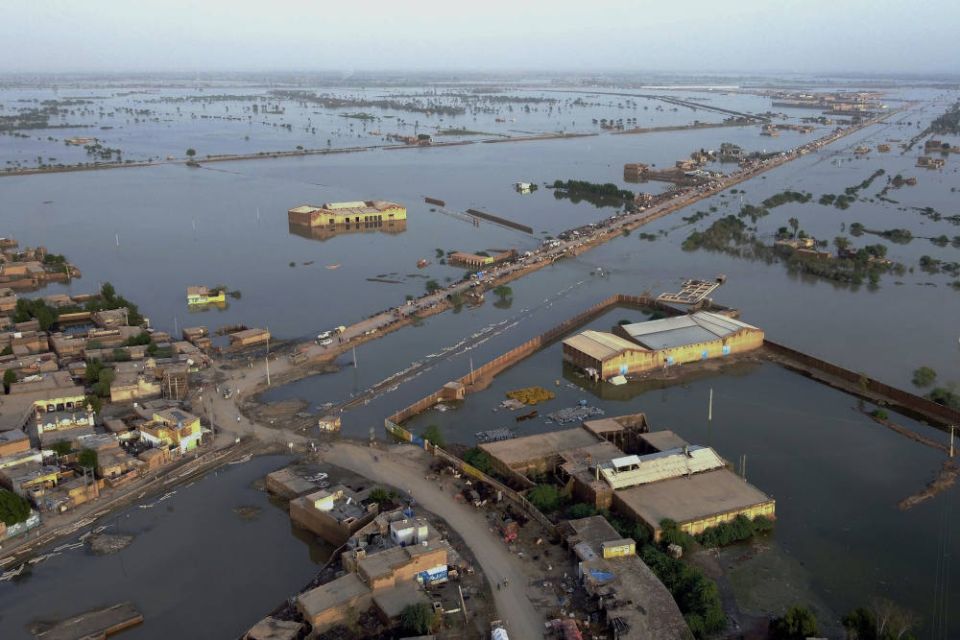 Homes are surrounded by floodwaters in Sohbat Pur city, a district of Pakistan’s southwestern Balochistan province, Aug. 29, 2022. Disaster officials say nearly a half million people in Pakistan are crowded into camps after losing their homes in widespread flooding caused by unprecedented monsoon rains in recent weeks. (AP Photo/Zahid Hussain)

Faith-based and other relief services are raising funds and providing emergency assistance to families in Pakistan, where record-breaking floods are estimated to have killed and injured thousands of people and destroyed large parts of the country, including homes and farmland. Millions have been impacted.

Islamic Relief USA — a nonprofit based in Alexandria, Virginia — has committed $340,000 toward the emergency response, with its country office hoping to reach 30,000 families in the hard-hit regions of Balochistan, Punjab, Sindh and Khyber Pakhtunkhwa, the organization said in a statement on Tuesday (Aug. 30).

There's also been an increase in diarrhea and other acute watery diseases, "and in the absence of a functional healthcare system, many people could lose their lives," he said. 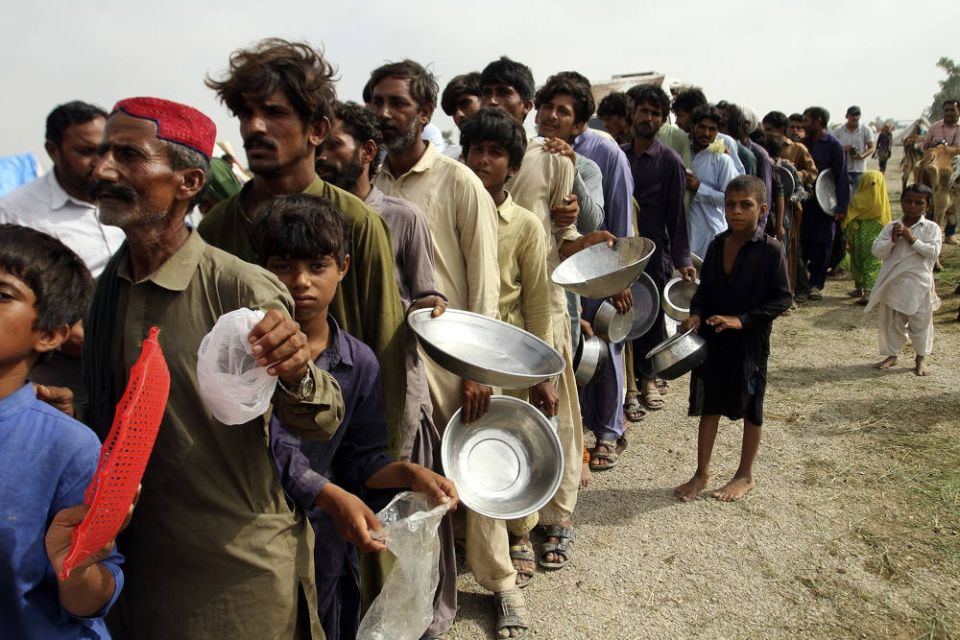 People displaced by flooding wait in a long line to receive food distributed by Pakistani army troops in a flood-hit area in the Rajanpur district of Punjab, Pakistan, Aug. 27, 2022. Officials say flash floods triggered by heavy monsoon rains across much of Pakistan have killed nearly 1,000 people and displaced hundreds of thousands more since mid-June. (AP Photo/Asim Tanveer)

With thousands displaced, Shirazi said many live in makeshift tents or fragile old buildings "that could collapse at any moment." He said the majority of residents are farmers who lost their lands and livestock to the floods.

"The humanitarian situation is terrible and could deteriorate without immediate international intervention," according to Shirazi.

Megan Gilbert, a spokesperson with Catholic Relief Services, said her organization has set up a relief fund that went live on Tuesday. CRS will begin distributing funds by the end of the week and expects to provide immediate cash assistance to 2,300 families.

Gilbert said CRS is working with organizations such as the Community Development Foundation to do assessment in the hard-hit region of Balochistan. It is also working with the Pakistani government and local partners, including Caritas Pakistan, to meet the most urgent needs of the people impacted by the persistent heavy rains in the provinces of Sindh and Baluchistan.

"What they’re describing is total devastation," Gilbert told Religion News Service. "For a lot of people, everything has been wiped away. People have lost their homes, their food, their livelihood. People lost a lot of livestock. Any planting has been washed away."

"It's heartbreaking," she said.

"The people living in the districts I visited were already marginalized," said Gul Wali Khan, CRS emergency response coordinator in Pakistan, in a message to his CRS colleagues in the United States. "Now they have become even more vulnerable in terms of their shelter and livelihoods. With the impact of the flood and the rain, we have seen people lose the food they planned to use over the next few months."

"With winter coming, we need to make sure people are able to get to places like markets," said a separate message from Mohammed Adam Hamid, acting CRS country manager in Pakistan. "The other issue is clean water. The usual water supplies have been damaged or are unreachable, which means people have to walk double or triple the distance to collect water."

Subsistence farmers have been especially hard hit, as the seeds they had planted for their crops were washed away in the ongoing deluges. "People who depend on rain-fed agriculture lost everything," Khan said. "The seeds they planted are all gone. Normally the people in these areas borrow from shopkeepers and traders, and now they will go further into debt."

While flooding has affected Pakistan from time to time in the past, the scope of this year's rainfalls is vast. The toll exacted on infrastructure in Sindh and Baluchistan, where 86% of those affected by the flooding live, has been immense. Two key canals in the provinces were breached, the first time that had happened since 2012.

In assessments of 25 communities in those provinces, CRS and Community Development Foundation found that 72% of water systems are damaged or destroyed and 79% of people have no food left. Moreover, roads and bridges have been washed away, making access to and from impacted areas challenging. Nearly 1,800 miles of roads have been damaged as well as 129 bridges and shops.

Where the water has receded, families are clearing debris and mud from their homes and protecting livestock from mosquitoes, which were a main killer of large animals in the 2011 flooding.

After the cash handouts, CRS plans to provide shelter, restore livelihoods and access to clean water. 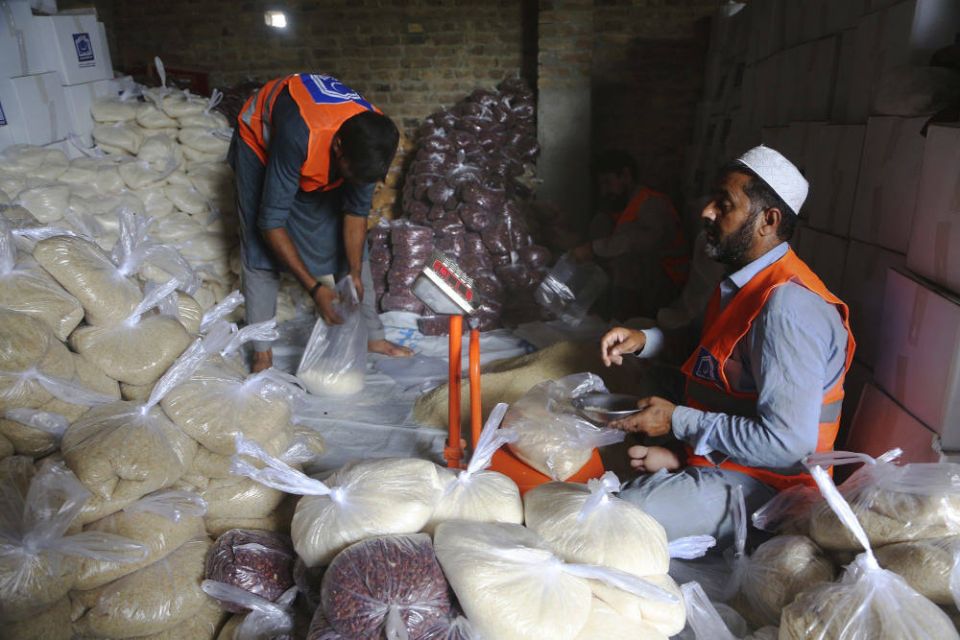 Omar Suleiman, an Islamic scholar and founder and president of the Yaqeen Institute for Islamic Research, urged donations and assistance for the people of Pakistan.

"The whole world needs to come together to help them through this, and do our part to not make the already vulnerable even more vulnerable with our neglect," Suleiman said on Twitter.

Suleiman, who is a columnist for RNS, included a link to Helping Hand for Relief and Development, a global humanitarian relief and development organization that has been a registered nongovernmental organization in Pakistan since 2005.

The organization has set up a fund where people can donate through its website. While any amount is accepted, the organization set up financial packages for donations. For example, a donation of $500 would fund flour, rice, lentils, sugar, tea, cooking oil, salt and clean water for 20 families.

Helping Hand for Relief and Development has teams in Pakistan in the provinces of Balochistan, Punjab, Sindh and Khyber Pakhtunkhwa to provide food, nonperishable items, medical assistance, mobile water filtration services and dry rations, according to its website.

More than 45,000 residents across 16 districts have received assistance as of Aug. 24, the organization said.

Through this emergency appeal, Pakistan Red Crescent aims to assist 324,040 people across the four most affected provinces. The organization is asking for donations to be able help those in need.

The Edhi Foundation, a social welfare organization based in Pakistan, has initiated a flood relief campaign and said its teams have been on the ground in all affected areas in Pakistan, "providing relief assistance including cooked food, dry ration packs, tarpaulin sheets, medical aid and other non-food essential items."

The nonprofit Akhuwat in Pakistan spearheaded a cash assistance relief fund for flood victims across Pakistan. In the first phase, the organization said it is immediately providing cash support, ration bags and food distribution. It will then work to provide interest-free loans for up to five years to help rebuild homes, according to its website.

Khalsa Aid International, a U.K.-based humanitarian relief charity, said it has mobilized teams on the ground to assess the needs of flood victims, according to its website. The charity is also working with local and international suppliers to secure vital aid supplies. The organization, which is based upon the Sikh principle to "recognize the whole human race as one," said it will be updating its relief efforts in the coming days and weeks.

[Additional reporting in this article was by Mark Pattison of Catholic News Service.]