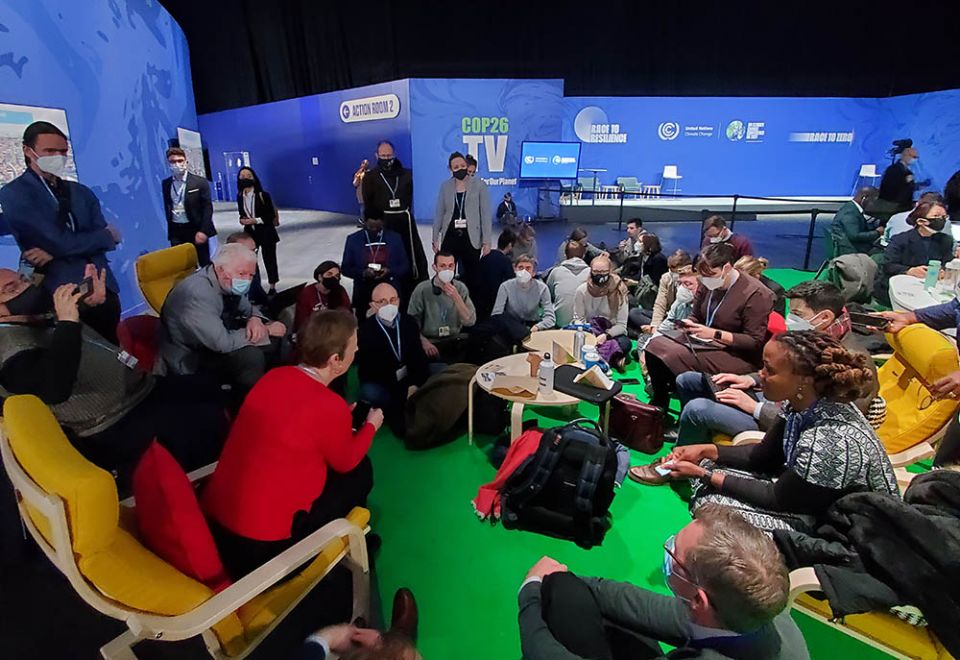 Glasgow, Scotland — Billions of dollars and a bevy of new commitments from countries to move away from fossil fuels represented promising developments during the first week of the United Nations climate summit, say Catholic development agencies here, but just how significant they are will depend on the details.

After opening with a series of speeches from world leaders who signaled the urgency of climate change, COP26 shifted to negotiations, where delegates from nearly 200 countries discussed how to meet their shared commitment under the Paris Agreement to hold global warming to a level that would avoid its most devastating impacts.

Specifically, that has focused on the call to "keep 1.5 alive," referring to the loftier goal, under the Paris accord, of limiting average global temperature rise to 1.5 degrees Celsius above preindustrial levels. Exceeding that, scientists say, would lead to more devastating and potentially irreversible impacts, including more extreme weather and droughts.

'It's good to see political will, but really, at the end of the day, what we need right now is action.'

New national climate pledges, known as nationally determined contributions, issued ahead of COP26 showed the world on track for 2.7 C of warming by the end of this century.

To turn the tide, countries have announced a flurry of bold goals to reduce methane emissions, end deforestation in this decade, deliver billions of dollars in funding, and put the end of coal as an energy source within sight.

But the first days of the Oct. 31-Nov. 12 international climate conference also exposed long-standing tensions between government leaders and civil society groups, especially youth activists and Indigenous communities, whose access has been limited because of pandemic-related provisions. They are skeptical that good-sounding words from politicians will be backed by substantial follow-through. 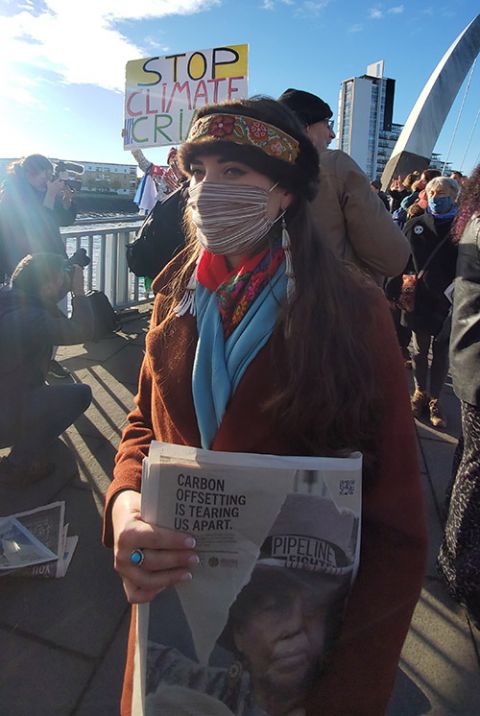 Lydia Machaka, climate justice and energy officer for CIDSE, a network of Catholic development agencies, said it was good to hear leaders recognize the need to hold warming to 1.5 C, but disappointing that the collective national plans brought to Glasgow fall well short of that goal.

"It's good to see political will, but really, at the end of the day, what we need right now is action," she said.

"Our bottom line is don't create false solutions that harm us more," Ruth Miller, a Dena'ina Athabaskan from near Bristol Bay, Alaska, told EarthBeat. "Don't create climate solutions that further colonization and oppression of Black, brown and Indigenous peoples. It is that simple."

Catholics here in Glasgow, including a six-person delegation from the Vatican, have prioritized the 1.5 C target, as well as ensuring that wealthy countries deliver on a long-standing pledge to provide $100 billion annually to aid developing countries in their response to climate change. They also support the demand by less-industrialized countries for compensation for losses and damages related to global warming, as well as an end to the use of fossil fuels, including an emphasis on slashing emissions rather than net-zero offsets.

Those goals were outlined in an unprecedented joint faith appeal to COP26 delegates that was signed by Pope Francis and nearly 40 other leaders of various faiths at a Vatican ceremony Oct. 4. The framed pages of the appeal are hanging on a wall between the two main plenary halls, where heads of state gathered Nov. 1 and 2. So too is a QR code that allows delegates to download the text directly to their phones. 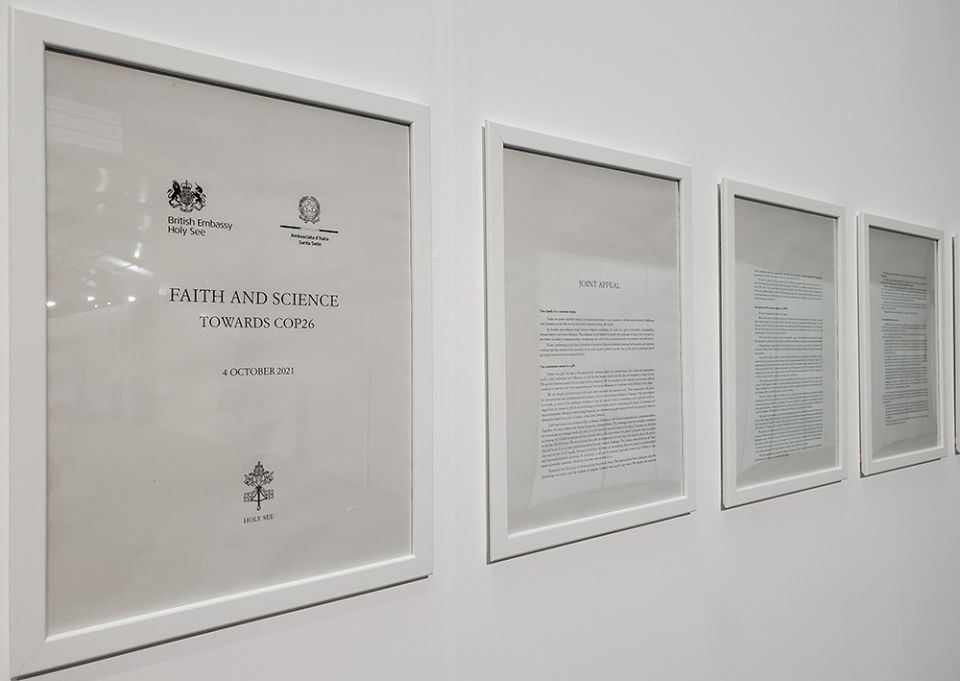 Framed pages of a letter from Pope Francis and nearly 40 other faith leaders, delivered to COP26 leaders on Oct. 4, hang on a wall between the two plenary halls where meetings are taking place. (EarthBeat photo/Brian Roewe)

Catholics joined people of various religious backgrounds Nov. 2 at St. George's Tron Church in central Glasgow, where they presented more than 150,000 signatures they collected from people of faith calling for urgent and ambitious action from world leaders here.

"Many people think that young people are idealistic, and maybe we are," said Olivia McKibbin, a student at Notre Dame High School in Glasgow, who's been a climate activist for seven years. "We are also practical — practical enough to realize that something needs to be done to save our planet. Practical enough to realize that now is the time for action."

Signs of progress on many of the issues faith groups have highlighted were present in the first days of this two-week conference as countries fired off a series of major announcements.

Twenty-five countries and public finance institutions, including the United States, committed to end all funding for overseas fossil fuel projects by the end of 2022 and prioritize a transition to clean energy. Another 190 countries and organizations said they would end financing for overseas coal specifically, and 28 countries, including Poland, South Korea and Indonesia, agreed to phase out coal-fired power.

And the U.S., European Union and United Kingdom pledged to mobilize $8.5 billion in the next three to five years to spur a shift from coal in South Africa, which generates roughly 77% of its energy from that fossil fuel.

Alok Sharma, COP26 president, said in a statement that the U.K., which is hosting the summit, has made clear that this "must be the COP that consigns coal to history. With these ambitious commitments we are seeing today, the end of coal power is now within sight."

Graham Gordon, head of public policy for CAFOD, the overseas development agency of the Catholic Church in England and Wales, told EarthBeat the announcements on fossil fuels were potentially "groundbreaking." He noted that 75% of planned coal-fired power stations in the past six years have been stopped because of loss financing.

"The history of coal is written on the wall, and we're hoping to see the same for gas and oil," Gordon said, adding that it builds political momentum for more countries to sign onto the shift.

Two studies, one from the International Energy Agency, have indicated that if the new pledges and commitments are implemented fully and on schedule, average global temperature rise would remain below 2 C. Another analysis indicated that at current rates, the world will bankrupt its carbon budget — the amount of planet-warming carbon that can be emitted without passing the 1.5 C target — within 11 years. Burning fossil fuels is the largest source of carbon emissions.

In other developments, more than 100 nations committed to cutting emissions of methane — a less prevalent but more potent greenhouse gas than carbon — by 30% by 2030. Another group of 100-plus countries — home to roughly 85% of the world's forests and including the U.S., China, Brazil and Russia — pledged to end deforestation by the same year. Governments and private companies committed $19 billion, including $1.7 billion for Indigenous communities, to that goal.

India, the world's third-largest greenhouse gas emitter, pledged to achieve climate neutrality by 2070, two decades later than the midcentury mark sought under the Paris Agreement, but its emissions could peak by 2030.

A coalition of 450 banks and private financial institutions announced they would direct the combined $130 trillion in assets they control toward achieving net-zero emissions by 2050. And U.S. climate envoy John Kerry said that developed countries were close to reaching, and possibly surpassing, the $100 billion in annual financing to assist developing nations with climate change mitigation and adaptation — a year behind the 2020 goal set by the Green Climate Fund, but two years ahead of a timeline announced just before COP26 began.

Throughout the week, the U.S., which returned to the Paris Agreement on President Joe Biden's first day in office, has sought to reestablish the country as a leader in the global climate effort. Biden at one point apologized for the country, the largest historical emitter of greenhouse gases, having abandoned the climate accord under former President Donald Trump. 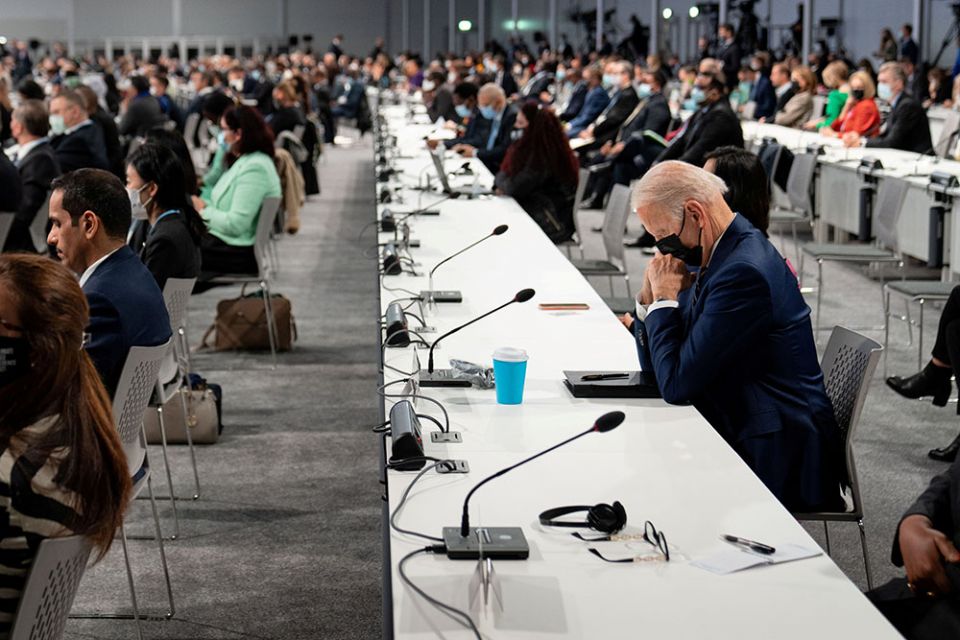 In his speech during the world leaders summit, Biden called climate change "the challenge of our collective lifetimes," but also "an incredible opportunity."

"We can create an environment that raises the standard of living around the world. And this is a moral imperative, but it's also an economic imperative — if we fuel greater growth, new jobs and better opportunities for all our people," he said, closing his remarks by saying, "May God save the planet."

Susan Hendershot, president of Interfaith Power & Light, praised the U.S. moves so far. During an event at which a petition seeking strong action at COP26 was delivered to a senior adviser to climate envoy Kerry, she urged the administration to go further, including by working with Congress to pass pending infrastructure and reconciliation bills.

"Without legislative or regulatory action on climate in Congress, the U.S. cannot be viewed as a global leader in solving the climate emergency," she read from the petition.

Catholic development agencies say the pledges made so far sound nice, but whether they make a difference will depend on whether they're delivered. 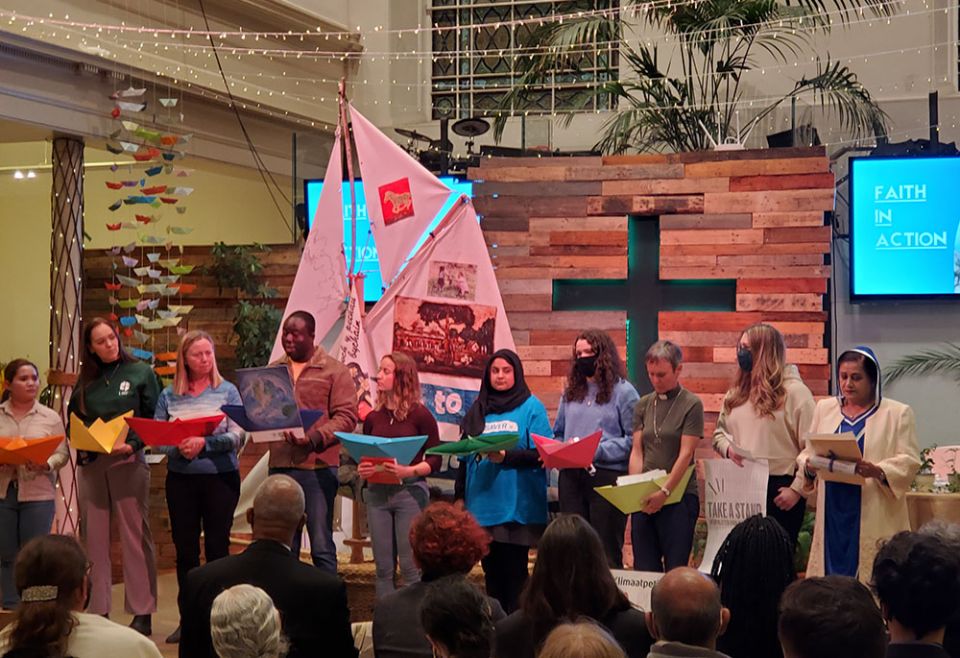 CIDSE's Machaka noted that countries have yet to fulfill their pledge of $100 billion annually to aid vulnerable countries through the Green Climate Fund. And she pointed to countries that continue to build new fossil fuel-fired power plants at home while pledging to stop funding them elsewhere.

Activists also criticized contradictions between the words and lifestyles of numerous leaders, from the estimated 400 private jets shuttling them to and from the conference, to Biden's enormous vehicle entourage, to the carbon footprints of Britain's royal family.

Several Catholic officials here said one issue with these agreements reached so far is that they often come without any consultation with local communities, leading to skepticism and uncertainty about what they will mean for people on the ground. Christine Allen, the director of CAFOD, added that consultation is crucial, and that people who are vulnerable to climate change "are not just passive victims."

"They know what the solutions are. They know what's needed — people are working at them already. What is needed is the financing and the financial infrastructure to make that happen," she said.

Rodne Galicha, executive director of Living Laudato Si' Philippines, added that perhaps one of the biggest developments was actually one of the smallest figures. Scotland announced it would commit a million pounds ($1.35 million) toward loss and damage, a term in U.N. parlance that refers to compensation to countries and communities that already have suffered the impacts of climate change.

Climate activists took to the streets the weekend before COP26 started and plan to do the same Nov. 6, with organizers estimating as many as 150,000 people could show up to call for firmer commitments and bolder and more urgent actions from the summit. Catholics will be joining in, as well as celebrating a Mass for COP26 the following day with the Scottish bishops' conference.

As for the rest of the conference, Catholic representatives said they will remain focused on debates around carbon markets, consultation of Indigenous and local communities and getting specific language on those issues included in national climate pledges.

Machaka observed that in many cases countries' nationally determined contributions do not explain how they will actually meet their targets, especially for 2030.

"A signal is not enough," she said. "What would convince us is real action."

Related: 5 reasons why Catholics should care about the COP26 climate summit