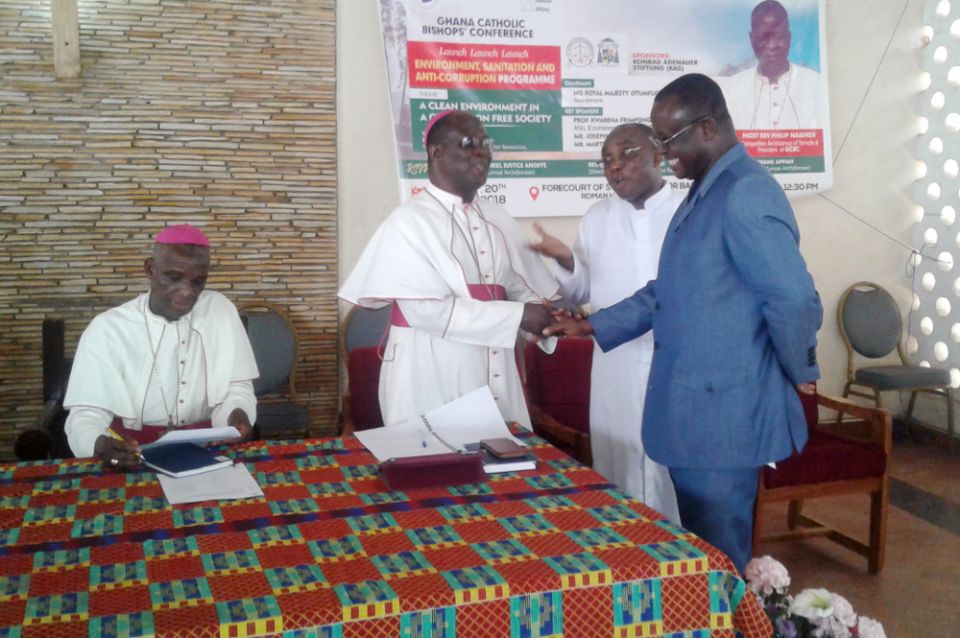 Deputy Speaker of Parliament Joseph Osei-Owusu is seen with Archbishop Gabriel Justice Yaw Anokye of Kumasi at the launch of the Ghanaian bishops' conference's project, "A Clean Environment in a Corruption-free Society." (CNS/Damian Avevor)

KUMASI, Ghana — With widespread concern over corruption and environmental neglect in Ghana, the church has launched a national project to help clean up the country.

"We shall fight against the perpetrators of the 'crime' against our common home, in the form of environmental degradation, poor sanitation and corruption, which are all social canker" that lead to increased poverty, hunger and sickness, said Bishop Joseph Francis Kweku Essien of Wiawso.

Water bodies, land and other natural resources must be protected for the use of all Ghanaians, Essien, chairman of the bishops' governance, justice and peace department, said at the late April launch in Kumasi of the conference's project, "A Clean Environment in a Corruption-free Society."

Parishes and other church structures throughout the West African country will implement the project, which aims to complement national government efforts to reduce corruption and improve sanitation.

The church will seek ways to address corruption, poor sanitation and abuse of the environment "and enhance the capacity of the lay faithful ... to support the local authorities in the search for accountability and local development," the bishops' conference said in a statement.

Ghana was placed 81 out of 180 countries in the 2017 Corruption Perception index, dropping 11 places from its 2016 ranking. Global watchdog Transparency International's index is based on independent surveys on corruption.

The church's work in fighting corruption will help to shape attitudes and contribute to the formation of "a new Ghanaian who would be able to frown on corruption and other social ills," said Samuel Zan Akologo, who heads the bishops' human development department.

Archbishop Gabriel Justice Yaw Anokye of Kumasi said at the launch that modern technologies and urbanization have led to the destruction of the environment.

A corruption-free society is crucial to the church and the nation, the archbishop said, noting that corruption undermines the government's ability to serve its people as it erodes the rule of law, public institutions and trust in leaders.

Lack of law enforcement in Ghana contributes to the current environmental degradation, he said at the launch, noting that some law enforcers have been complicit in various destructive acts against the environment.

Ghanaians need to be taught to care for the environment and to be bold in reporting corruption, he said.

The church is also part of a two-year interfaith project called "Shaping Hearts, Attitudes and Minds to End Corruption in Ghana" that aims to influence students to avoid corruption.