by Soli Salgado
Action
This article appears in the Synod for the Amazon feature series. View the full series. 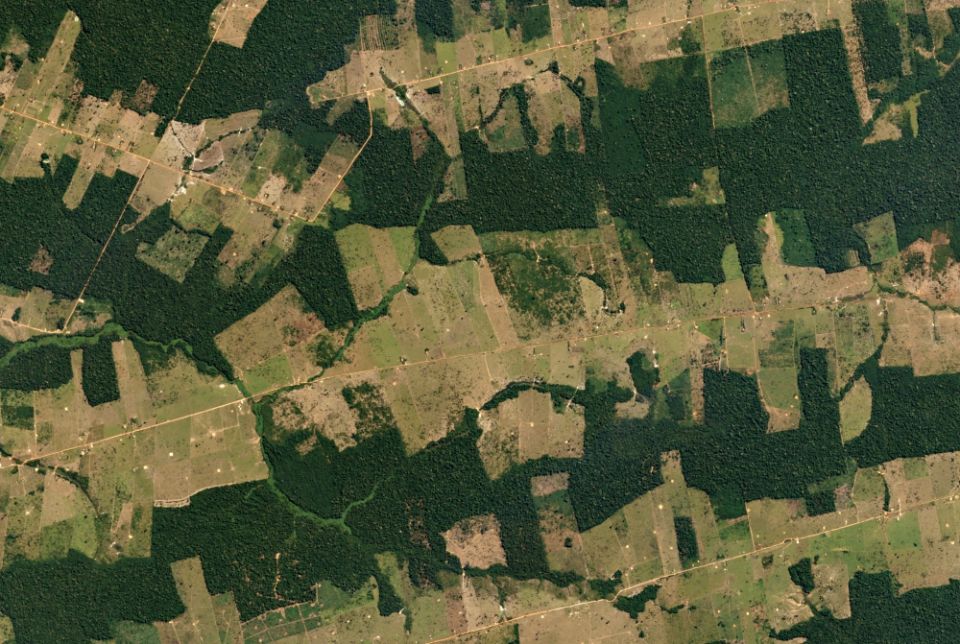 A 2016 satellite photo shows farms and pastureland carving their way into the tropical forest in the western Brazilian state of Rondônia. The state is one of the Amazon’s most deforested regions. (Wikimedia Commons/Planet Labs Inc.)

Rome — In one of the most deforested parts of the Amazon, the Karipuna tribe in the state of Rondônia, Brazil, has trouble sleeping. But the lack of peace in the indigenous village goes beyond the disruptive sounds of tractors and weapons that cause a restless night.

Messages trickle in from invaders with threats that the village will be destroyed and its inhabitants killed, beginning with their leaders, said Franciscan Catechist Sr. Laura Vicuña, from the Karipuna community. "They say, tell the people we know where they live and where they travel through.

"This psychological pressure keeps us from living in peace," she said through tears.

Vicuña was one of a few indigenous leaders who had traveled to Rome as representatives of their Amazonian communities, transmitting the realities and worries that their people live with in South America. Ahead of the Synod of Bishops for the Amazon, which opened Oct. 6 and continues through Oct. 27, Catholic clergy, scholars and indigenous leaders came together for an Oct. 5 event called "Voices from the Amazon: Land, People, and Religion." There, conversations and presentations demonstrated the experiences and concerns that native people of the Amazon hoped would influence the synod.

Franciscan Fr. João Messias Sousa, who lives next to the indigenous Munduruku town in Brazil, put this in frank terms for the Catholics in attendance: "For them, this is like dropping a bomb on the Vatican. Their sacred land was destroyed."

"You don't need to build a temple in the jungle for it to be holy," he said. "Those who participate in the synod need to communicate this message. ... I don't want the indigenous to be converted into monuments like those you see here in Rome."

One of the issues that the synod is expected to address is how Catholic communities will respond to the ecological destruction consuming the region.

"It is deforestation without precedence in history," said Vicuña, who in 2017 traveled almost 100 miles with fellow Karipuna members throughout Brazil in order to register specific geographic coordinates that would serve as evidence of invasion and ideally convince the government to take legal action. Instead, "we got death threats" from the invaders against the entire Karipuna village.

For thousands of years, this tribe has been living "in harmony with the environment," she said. But in 1978, the first contact between the Karipuna tribe and nonindigenous people introduced diseases that wiped out most of the native people, as well as the start of industrial invasions and deforestation that have only continued.

"For the second time, we're about to experience another genocide, through illegal actions by the government and corporations encroaching on our lands, trying to take over," she said, adding that the Brazilian state intends to put the "indigenous lands in the hands of the private sector to expand markets, occupying land for industrial purposes."

Donning a tall colorful headpiece and red face paint, José Luiz Cassupá, an indigenous leader from Rôndonia, spoke at the event representing 53 tribes in that Amazonian region. And he didn't come "to talk about the beautiful things of our lands."

"I am here to say that the indigenous pueblos are worried for the security in our lands: the riches, the cultures, our traditions, traditional medicine, the fruits, our animals, the soil that sustains us and nourishes."

He added that he believes Latin American governments only care about markets, which means that their lands — which the Brazilian constitution formally recognized in 1988, defining territories with precise limits — are being swept into the transactions, with villages being either eliminated or forced to relocate so as not to be an obstacle to development. 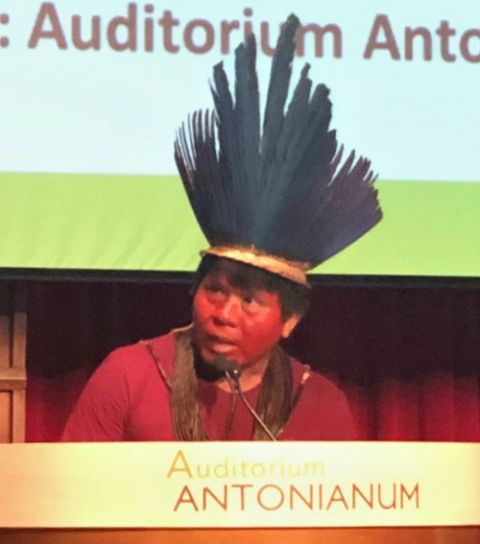 José Luiz Cassupá, an indigenous leader representing more than 50 tribes from Rôndonia, Brazil, called on attendees of the Oct. 5 event "Voices of the Amazon" to share the worries of his people with the pope. (NCR photo/Soli Salgado)

Many isolated villages do not want contact with an "ambitious society, a society that destroys," he said, because they are happy as they are, practicing their traditional medicine and carving arrows and gathering fruit. "And I understand that."

And while conversations regarding territory disputes tend to revolve around "development," Cassupá said that's not actually what this is about. "We are talking about development with destruction." He added that though their lands are clearly marked, 60% of their territories "are being exposed to exploitation, and within those territories are indigenous villages. They will disappear. That is what we are denouncing."

He added that while the government and authorities try to have them believe that certain politics do, in fact, favor indigenous villages and protect the environment, "that's not true. We need more protection, more attention from the world."

Fires continue to rage through the Amazon rainforest, burning three times as many hectares as last year. Cassupá noted that while many regard the Amazon as "the lungs of the world," if the lungs are sick, it's because "the cancer of man" is destroying and exploiting it. "And nobody is noticing. This is our main worry as leaders of indigenous."

'We have to hide in the jungle'

Vicuña and Cassupá said that their purpose for being in Rome was to speak for their people, to illustrate their suffering and the breach of human rights in Brazil, the world's most Catholic country. (Almost two-thirds of the population identify as Catholic).

For the past couple years, Vicuña said, the Karipuna people "had to change our lifestyle, take different paths, suffer death threats — in other words, we have lost the liberty to come and go because of organized crime, which feels legitimized." 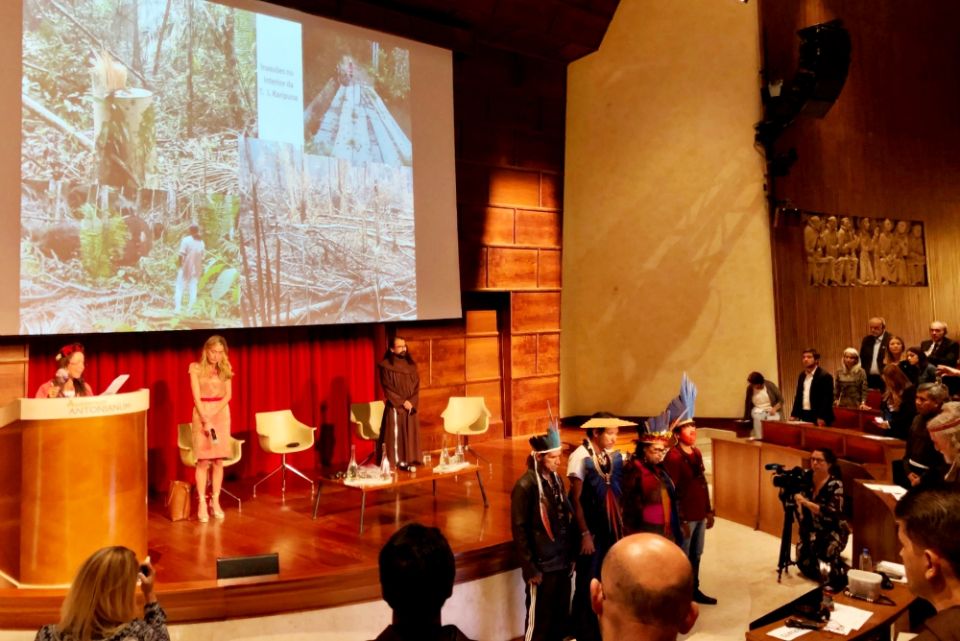 Franciscan Catechist Sr. Laura Vicuña, left, from the indigenous Karipuna community in Brazil, leads a prayerful chant as other indigenous leaders stand before the audience at the Oct. 5 event "Voices of the Amazon." (NCR photo/Soli Salgado)

"When we go through our territory, we have to hide in the jungle against armed invaders," she said.

"Some of you perhaps wonder, why don't you ask for help, or a protection program to protect our human rights? It is impossible. Today, it's impossible to believe in the government's protection programs. Today, those who defend the rights are victims of the organized crime."

But with the synod in session, Vicuña said, it is the first time in history that the Amazon and its original villages "are at the center of church reflection. Pope Francis was very sensitive and stands in solidarity [with us], and has made possible this unique moment with the Amazon synod."

Cassupá told the auditorium that he was here to get their attention, asking them to "tell the pope that he needs to send more missionaries to the Amazon," to help orient the villages and families who live along the rivers. "These families need to learn how to protect what little land they still have."

"We desire to leave these events stronger. We come to ask for help," he said.

"You can't speak of plants; you have to speak of seeds," and today, a seed has been planted that "all of us will water, care for, and protect."

"The Amazon depends on you," Cassupá said. "Your future depends on the Amazon. It depends on this little seed that we all are sowing and that we will cultivate."