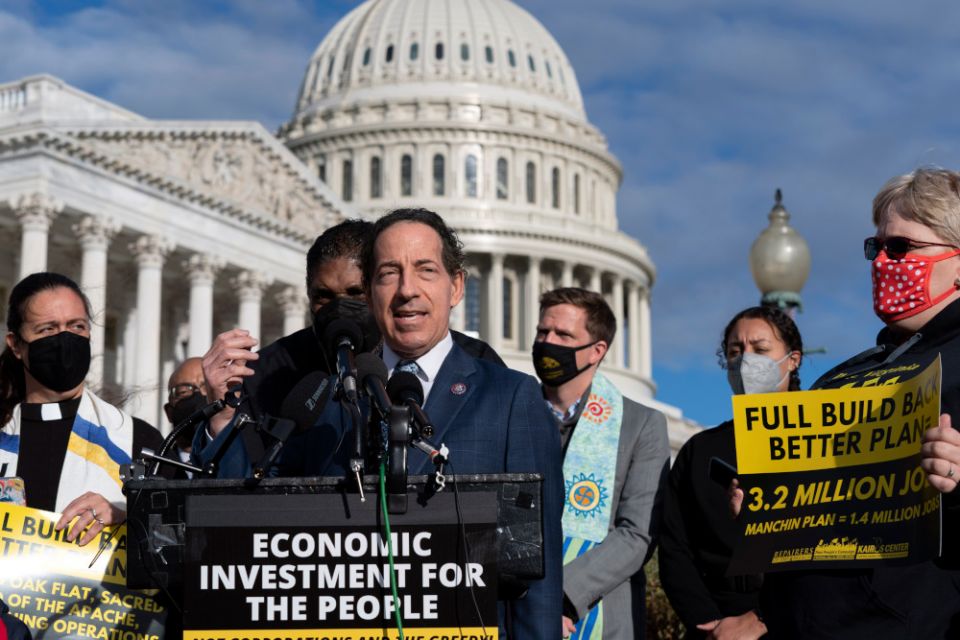 Rep. Jamie Raskin, D-Md. accompanied by the Rev. William Barber and the Poor People's Campaign talks to reporters about the need for the "Build Back Better" plan, voting rights, health care, immigrant rights and action on climate change, during a news conference on Capitol Hill in Washington, Oct. 27, 2021. (AP/Jose Luis Magana)

Editor's Note: This story originally appeared in Reuters and is part of Covering Climate Now, a global journalism collaboration strengthening coverage of the climate story.

Washington — U.S. Democrats in Congress squabbling over how best to invest in the fight against climate change will forge a compromise in coming months that could be signed into law by President Joe Biden, Democratic Representative Jamie Raskin predicts.

Significantly, Raskin signaled that he and other liberals should be willing to compromise on the shape of such a package, although he gave no details on what those compromises might be.

"We should cut the deals that need to be cut," Raskin said, while "trying to build as large a coalition as possible."

A leading liberal in the House of Representatives, Raskin spoke on Thursday in an interview with Reuters, National Public Radio and The Guardian newspaper.

But signs are emerging of a slimmed-down "Build Back Better" bill, as Biden's Democrats seek to score legislative victories including on climate action ahead of congressional elections in November.

"We're disappointed that 'Build Back Better' as originally advanced in its entirety won't be going, but we're convinced that major chunks of it, including the $550 billion investment in renewable and safe energy, will find its way onto the floor of the House (of Representatives) and the floor of the Senate," Raskin said.

The original "Build Back Better" package included provisions to reduce emissions from the U.S. power and transportation sectors that together account for about half the U.S. greenhouse gases. Those provisions could include incentives for adopting renewable energy, electric vehicles or carbon capture technologies.

Passing even a slimmed-down version likely would require support from every Democrat in the Senate, which is evenly split between the Republican and Democratic parties, with Vice President Kamala Harris, a Democrat, holding the power to cast tie-breaking votes to secure victories for her party.

Despite Raskin's optimism, nothing is certain and negotiations could still fall short. To date, no Republican members have backed the legislation, making Manchin the best hope for passing any bill.

Congressional leaders will be keeping a close eye also on another conservative Democrat, Senator Kyrsten Sinema, who has raised objections in the past to parts of Biden's domestic investment initiative.

In recent weeks, Manchin has indicated he could go along with a plan that makes climate change investments, paid for by raising tax revenues and lowering costs of prescription drugs covered by Medicare.

Aides to some Democratic lawmakers lately have also expressed confidence that lawmakers may be coalescing around a revised climate change bill.

Raskin's remarks were part of a broader conversation with reporters on U.S. climate policy and the democratic process — two topics in focus as Biden struggles to make good on pledges to cut planet-warming emissions.