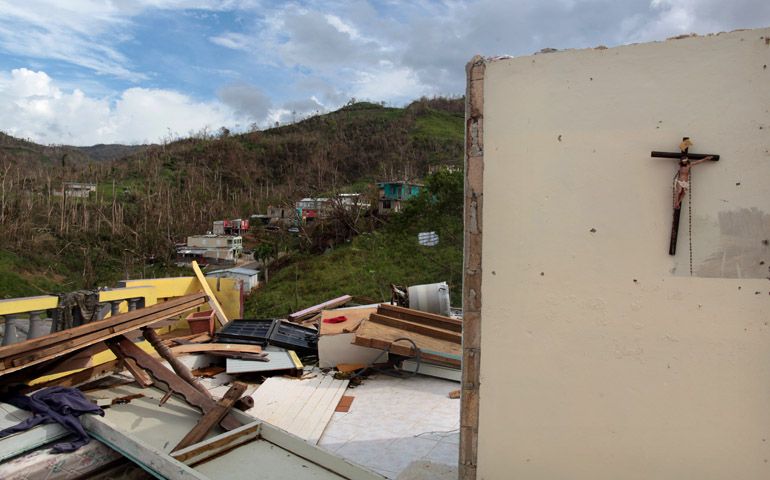 A crucifix hangs on the wall of a destroyed house Oct. 5, 2017, in San Lorenzo, Puerto Rico. (CNS/ Reuters/Alvin Baez)

In October 2017, students at a Jesuit secondary school in Spain's Aragon region were studying hurricanes. At the same time, their peers in Puerto Rico were living through the aftermath of one.

Separated by an ocean and widely different circumstances, the students at Colegio del Salvador in Zaragoza, Spain, wrote letters of support to the students of Colegio San Ignacio de Loyola in San Juan, Puerto Rico, who remained in the midst of recovery from the devastating destruction brought by Hurricane Maria a month earlier.

What connected the two schools wasn't simply empathy but an environmental textbook, Healing Earth, that each class had used, with the Caribbean's hurricane fallout presenting a case study come to life. 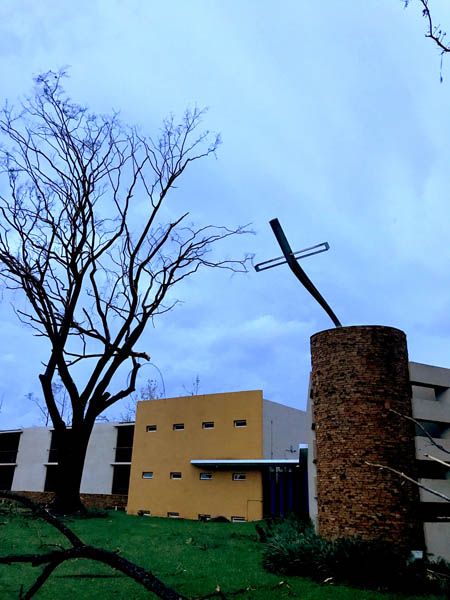 Wind from Hurricane Maria bent this iron cross Sept. 20 on top of a tower at the entrance of the Jesuit Colegio San Ignacio de Loyola in San Juan, Puerto Rico. The deadly hurricane plowed into Puerto Rico Sept. 20 with winds up to 155-miles-per-hour. (CNS/Courtesy of Jesuit Fr. Flavio Bravo)

"It's not just a textbook that's going from us to users, but we're able to get this lateral connection going, which is exciting," said Michael Schuck, an associate theology professor at Loyola University Chicago and co-editor of the book who helped put the schools in touch.

In January 2016, the Jesuit university launched Healing Earth as a free, online textbook available to anyone with an internet connection. Co-edited by Schuck and Nancy Tuchman, a biology professor and dean of Loyola's Institute of Environmental Sustainability, the e-textbook is geared toward upper-level secondary school students, beginning college students and adult learners.

Beyond its pricing and paperless publishing, what differentiates Healing Earth from other environmental science texts is its integration of ethics, theology and spirituality into the curriculum — subject matters not often associated with science classes — in an effort to deepen the learning experience from simply understanding what is happening and why with respect to the environment, to what it means and what can be done about it.

The approach parallels the integral ecology that Pope Francis highlighted in his 2015 encyclical "Laudato Si', on Care for Our Common Home," which coincidentally published roughly seven months before Healing Earth.

"When the encyclical came out, we were convinced that the pope had read Healing Earth," Schuck said.

The team behind Healing Earth briefly met Francis in September at the Vatican, where they were among the inaugural recipients of the Expanded Faith Awards, presented by the University Francisco de Vitoria, in Madrid, and the Joseph Ratzinger-Benedict XVI Vatican Foundation.

"It was just very affirming for our project," Tuchman said.

The idea of a "living textbook" blending science, ethics and spirituality originated six years ago in the mind of Jesuit Fr. Michael Garanzini, formerly Loyola president (2001-2015) and director of the Jesuit Higher Education Secretariat in Rome. The concept came, in part, from a 2011 special report on ecology from the Society of Jesus, titled Healing A Broken World. Among the report's recommendations: developing teaching resources and curricula in environmental studies as well as increased collaboration on environmental concerns — an increasing focus for the Jesuits, in particular the impact of ecological degradation on the poor — among its vast network of schools worldwide.

Healing Earth, which has been used in classrooms in at least 17 countries, 20 secondary schools and more than 30 universities, attempts to do just that.

The e-textbook runs six chapters — introduction, biodiversity, natural resources, energy, water, global climate change — with each written by an interdisciplinary team of scholars and teachers. While faculty from Loyola University Chicago represented roughly a third of the contributors, about an equal number of writers hailed from outside the U.S., including Brazil, India, Indonesia, Spain and Zambia.

"We tried to make it a global perspective so it's not just about the United States and what's happening here," Tuchman said. 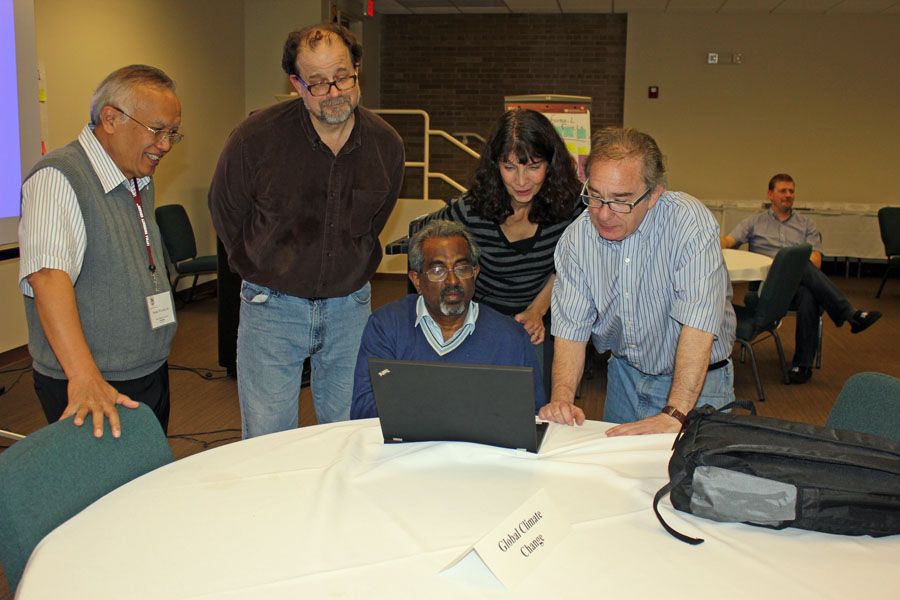 Michael Schuck, second from left, co-editor of Healing Earth, works with other contributors during a roundtable discussion in October of 2012 that formed the basis of the textbook’s global climate change chapter. (Loyola University Chicago)

Each chapter starts with the science to provide a basis of understanding of the issue before expanding into the ethics, spirituality, and finally, a discussion of actions under way as well as ideas for students to get involved themselves.

"They really get into it, and sometimes I have to try to pry them away from discussions along that," he told NCR.

Hinds, who teaches three classes on AP environmental science and has used Healing Earth as a supplemental text the past two school years, attributes their interest in part to teenagers' attunement to what's right and wrong. But he also sees some students, many from economically disadvantaged families, relating personally to case studies about landfills or power plants built near lower-income housing areas.

"They get a chance to see those kinds of things and they start to pick up. They say, 'Wait a minute, that's like where I live,' " Hinds said.

Incorporating into classroom discussions the spiritual and ethical discussions beyond the science helps students become more critical and analytical thinkers about their world, he added, recognizing the interrelatedness not only of the subjects they study but what happens in the communities all around them.

Connections to Laudato Si' have also piqued Hinds' students, as they're surprised by what the pope has said about environmental stewardship, and curious why more people haven't heeded his directives. In reply, their teacher told them, "OK, that's what you're going to do." 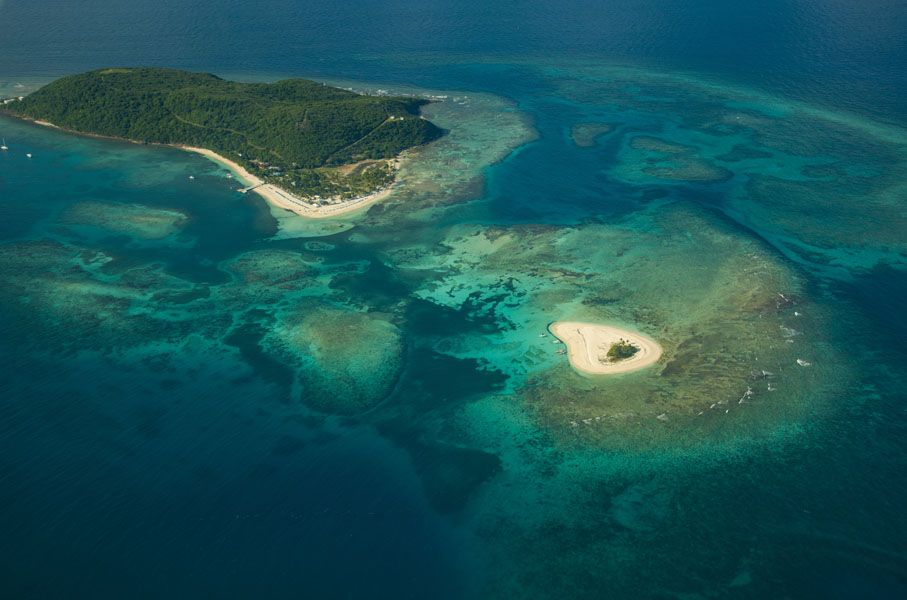 This aerial view taken in 2012 shows Palominito Island off the coast of Puerto Rico. (CNS/Octavio Duran)

At Loyola Academy, another co-ed Jesuit high school in Chicago, references to the pope's encyclical and Jesuit documents in Healing Earth has led environmental science teacher Jennifer Snyder to make regular use of its climate change chapter.

"The way the climate change one is written is so different than in the traditional textbook because they talk about Laudato Si'," she said. Having Catholic social teaching included in a textbook, she added, makes it easier for science teachers to find ways to weave the Ignatian pedagogy and the school's mission into their lesson plans.

While both Snyder and Hinds have found Healing Earth enhancing classroom discussion, they said they can't use it as their primary textbook largely because it doesn't cover all of the material associated with the college-credit AP test for environmental science administered by The College Board. 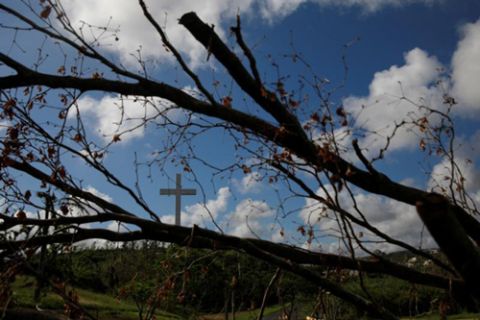 The book's editing team continues to make updates, including a forthcoming chapter on food, a synthesis chapter tying together all the issues addressed from a macro level, and more global case studies. They also plan to polish up the Spanish translation — a priority with a sizable number of the text's users located in Spanish-speaking countries — and eventually add a French version, with an eye toward reaching schools in some African countries.

Other goals include a deeper collaboration with the Cristo Rey network of schools and with the Jesuit Refugee Services, the latter to bring Healing Earth into its schools set up in refugee camps. The small staff is also seeking additional donors, so far predominantly funded by Loyola University Chicago.

Ultimately, Tuchman said they strive to reach 100 known users of Healing Earth. As it stands, the free and online components, while making the book widely accessible, doesn't allow for a true count of how many teachers are using it in classrooms.

"We might already have those 100 and we have no way of knowing," Tuchman said.

From the workshops they've given on Healing Earth around the globe, she and Schuck have seen the textbook take root in classrooms, and see potential for it to become a larger platform for Catholic schools to address environmental issues across the planet.

"I hope Healing Earth can grow, and people can become aware that it's a place to come to talk about the challenges we're facing," Schuck said.

A version of this story appeared in the Feb 23-March 8, 2018 print issue under the headline: E-textbook brings environmental ethics to class .