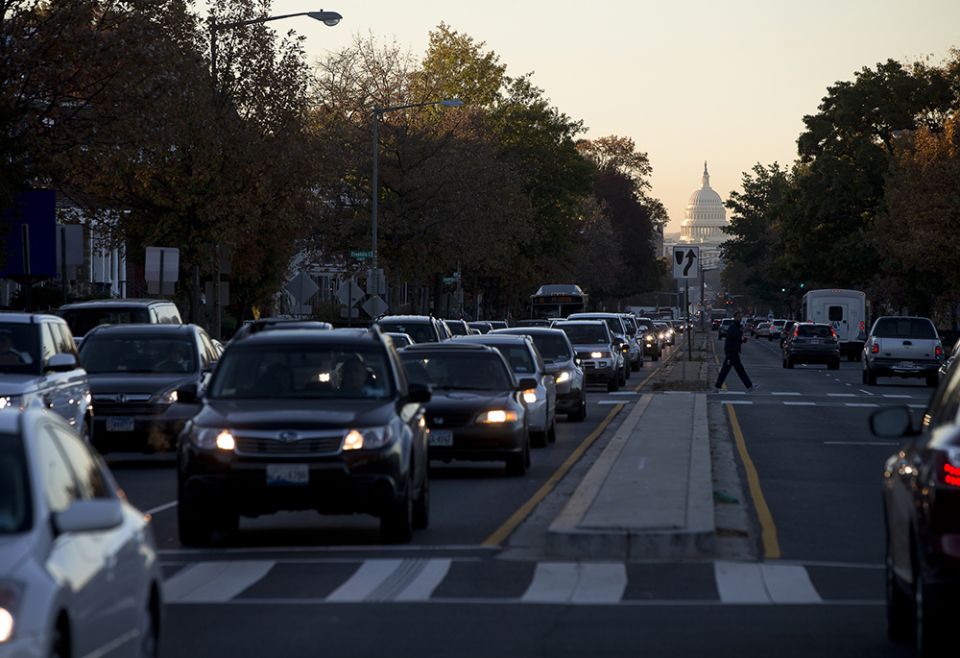 Commuters drive to work and to polling stations Nov. 8, 2020, in Washington. (CNS/Tyler Orsburn)

More than 600 faith leaders are urging the U.S. Environmental Protection Agency to accelerate its next round of pollution reduction standards for combustion-engine cars and trucks all while the auto industry races to expand their fleets of electric vehicles.

In a letter delivered Sept. 8 to EPA headquarters and addressed to administrator Michael Regan, the faith contingent called for the agency to issue before 2023 a draft rule for vehicle model years 2027 and beyond to further improve fuel efficiency and reduce greenhouse gas emissions from tailpipes, which they said would put the country "on a trajectory to make all new cars and light-duty trucks zero-emission vehicles no later than 2035."

"We must maximize the impact of our national clean car standards — the most effective policy that the federal government has to reduce dangerous air pollution, lower greenhouse gas emissions, and save drivers money at the pump," said the faith letter, which was organized by Interfaith Power & Light and also addressed to President Joe Biden.

Transportation is the nation's largest source of greenhouse gas emissions, accounting for 27% of the heat-trapping gases. Of that total, more than half of emissions come from cars and trucks. In addition to contributing to rising global temperatures, vehicle exhaust pollution poses respiratory health risks, particularly for communities and neighborhoods near highways and highly trafficked roads.

In December, EPA finalized its most stringent rule to date under the Clean Air Act that sets fuel economy standards for model year 2026 vehicles at 58 miles per gallon for passenger cars and 48 mpg for light-duty trucks, compared to the current 38 mpg average standard. EPA estimated the new standards by 2026 would reduce emissions from cars and trucks by 28.3%, avoiding the release of 3.1 billion tons of greenhouse gas emissions through 2050 and reducing gasoline use by 360 billion gallons. At the time the rule was issued, EPA said it would next turn attention toward an emissions standard for future model years, though it did not announce a timeline.

"Our climate, our communities, and our conscience compel us to demand the strongest possible clean car standards," Leah Wiste, executive director of Michigan Interfaith Power & Light, said in a statement. "With more Americans dying each year from tailpipe pollution than from car accidents, clean cars are critical for the health and wellbeing of current and future generations."

Among the letter's signers were IPL's national and state chapter leaders, 125 Catholic women religious as well as representatives of Catholic Climate Covenant and Franciscan Action Network.

Bill Bradlee, national organizing director for Interfaith Power & Light, told EarthBeat the faith community's push now for the next slate of clean car standards is in part due to the lengthy process involved in issuing a rule, which by law requires multiple periods of public comment and testimony. 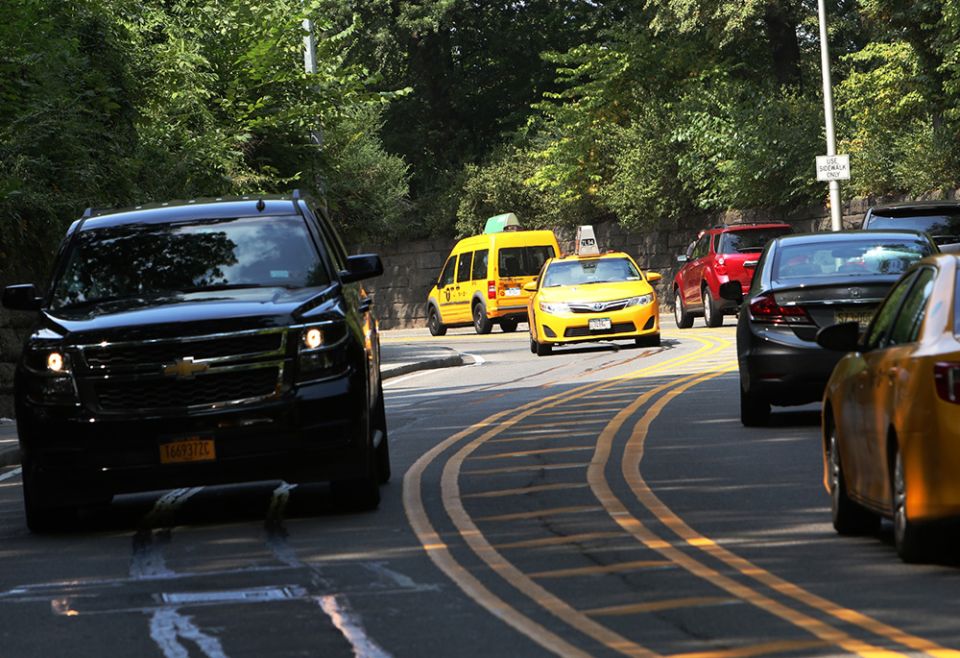 But they're also looking to build on momentum from the billions in electric vehicle tax credits included in the Inflation Reduction Act and to seize a chance to send a clear signal to the auto industry that the future of driving is in zero-emissions vehicles, that "this is the direction we're going."

"Industry loves certainty. So we want to provide that certainty for them that this is where we all need to be going as a nation and as a globe," he said.

The Inflation Reduction Act contains a $7,500 tax credit for purchasing new electric vehicles and $4,000 for used models. The incentives contain income caps and vehicle cost ceilings, and also stipulate eligible EVs be assembled in the U.S. Along with that, the 2021 Infrastructure Investment and Jobs Act allocated $7.5 billion to build a national vehicle charging network, with a portion earmarked for rural areas, communities of color and places where access to charging stations is limited.

Related: Who will build California's electric vehicle charging stations and why it matters

Interfaith Power & Light has worked on an auto campaign for several years. The shift to clean cars, it says, presents one of the biggest opportunities to address climate change while also addressing environmental justice issues where communities of color are often exposed to higher rates of air pollution tied to transportation.

Air pollution, including particulate matter and smog commonly emitted from motor vehicles, has been linked to increased risks of lung and heart disease, asthma, impaired cognitive functioning and premature birth. 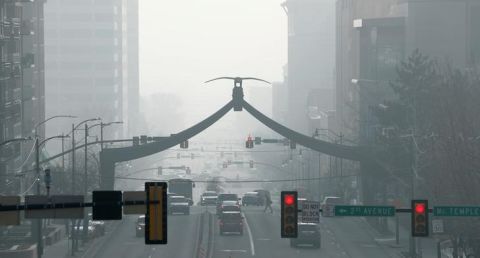 More than 40% of Americans live in places with unhealthy air, according to the American Lung Association's 2022 "State of the Air" report, with people of color 3.6 times more likely than white people to live in such areas. A separate study found that Black, Hispanic and Asian Americans all face higher exposure to fine particulate matter from both light-duty vehicles and diesel-powered heavy trucks along with other sources.

"We're seeing that it's even a bigger human health impact than once realized," Bradlee said, making it "even more critical that we start to deal with those issues and make sure that public health isn't harmed, and particularly some of the people who are most vulnerable to the pollution created from tailpipes."

Along with government lobbying, Interfaith Power & Light has called on automakers, specifically General Motors and Toyota, to follow through on pledges to build more electric vehicles. As part of that campaign, faith leaders are planning to attend auto shows later this year to show support for developing more, and affordable, EVs.

In October, GM, one of the world's largest automakers, announced plans to sell only zero-emission vehicles by 2035 and invest $35 billion by 2025 in the technology. Meanwhile, the Japanese-based Toyota has been slow to pivot to EVs and has lobbied against clean car regulations in the U.S. at the federal level and in California.

But widespread adoption of EVs remains miles away.

Approximately 1% of all U.S. passenger vehicles currently on the road are fully electric, a figure that increases slightly when including hybrids. New EV sales jumped 60% in early 2022, and some forecasts project they will make up half of vehicles in the U.S. by 2050. 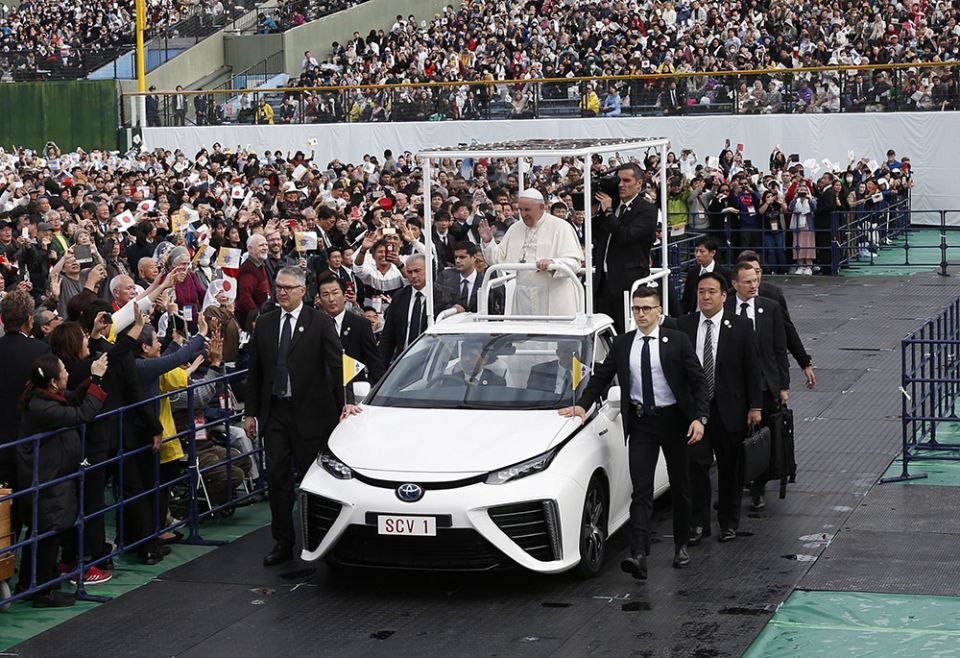 Pope Francis rides in a hydrogen-powered Toyota vehicle as he greets the crowd before celebrating Mass at the baseball stadium Nov. 24, 2019, in Nagasaki, Japan. The Vatican plans to gradually replace all of its service vehicles with an all-electric fleet. (CNS/Paul Haring)

Over the years, electric vehicles and clean cars have been popular gifts to Pope Francis, who in his encyclical "Laudato Si', on Care for Our Common Home" outlined the "urgent need" to replace fossil fuels with renewable energy "without delay." The Vatican has committed to convert its service vehicles to an all-electric fleet.

Interfaith Power & Light has also looked to get religious congregations to adopt EVs. In 2021, its annual Cool Congregations challenge added a category for transportation, with steps like boosting the use of EVs among staff and members, educating about them, and installing charging stations at houses of worship to allow congregants to plug in their car while they recharge their soul.

While Interfaith Power & Light's current campaigns have focused on making automobiles as clean as possible, Bradlee said they also recognize the need to advocate for carless transportation, too, such as expanding public transit access and pedestrian and cycling infrastructure.

"I'm a bicycle believer myself," he said. "I do have a car, but I try to leave it in the driveway as often as possible."