by Maria Benevento
This article appears in the Campus Notebook feature series. View the full series. 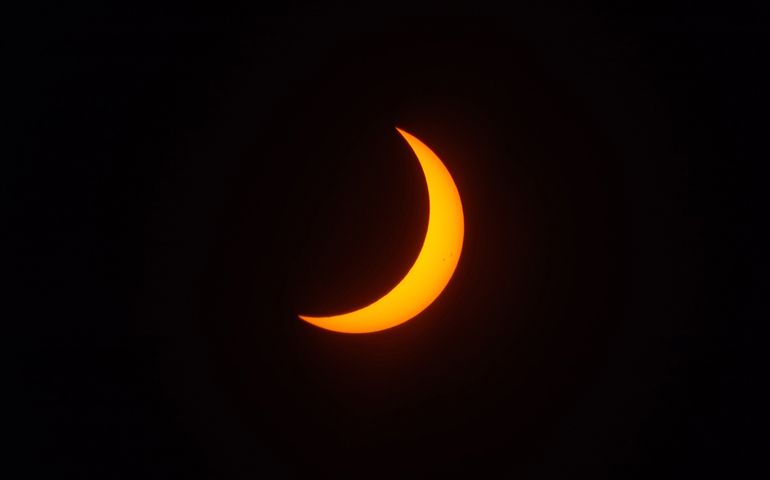 The moon eclipses the sun as seen from Chester, Ill., on the afternoon of Aug. 21. The area saw clear skies during the total solar eclipse, which lasted more than two minutes and 30 seconds. (CNS/Brandon A. Evans, The Criterion)

OAKLAND, CALIF. — Three Catholic universities have been recognized as members of the top 20 green colleges and universities in North America by the Sierra Club's national magazine.

According to a press release, Sierra Club surveyed 227 schools in 36 states, the District of Columbia and Canada to develop its "Cool Schools" ranking of schools that "have displayed a deep and thorough commitment to protecting the environment, addressing climate issues, and encouraging environmental responsibility."

Loyola Marymount University, which had scored in the mid-60s the two previous years, made a dramatic improvement to become the highest ranked Catholic school on the list, with an overall ranking of six and the top score in the sustainable water usage category. The university features 90,000 square feet of solar panels, an irrigation system that uses reclaimed water, and a university-led recycling plant. They won a first place medal in the inter-university RecycleMania competition and plan to divert all food waste by 2018.

The University of San Diego, which was absent from the list in 2016 and landed at number 83 in 2015, also improved substantially and received a 10th place ranking. Inspired by Pope Francis' 2015 encyclical Laudato Si' the university lists "care for our common home" as part of its mission, operates one of the city's only electronic waste recycling center, and has saved more than 10 million kilowatt-hours and 30 million gallons of water annually since 2010.

Meanwhile, Loyola University Chicago dropped slightly from its seventh place score in 2016 but still remained in the top 20 at number 16. This year, Loyola Chicago students partnered with the Archdiocese of Chicago to conduct energy audits on Catholic churches, cemeteries and hospitals. They also feature a student-run green café, "Loyola 101 Sustainability" trainings for new students, and a Compost Collection Network where students train local businesses to reduce food waste.

“We continue to be inspired by the creative and innovative ways colleges and universities across the country are working to tackle the climate crisis and move toward a sustainable future,” Jason Mark, Sierra magazine’s editor in chief, said in the press release. “From powering campuses with clean energy to educating students on new methods of sustainability, it is this leadership that is driving positive change and helping to shape a future that is clean, just, and equitable for all.”

Schools were scored on 11 categories including energy, investments, food, academics, planning and water.

FAIRFIELD, CONN. — After exceeding the $160 million target for its "Fairfield Rising" capital campaign, Fairfield University has reset its campaign goal to $210 million and plans to break ground on a new academic facility to house the Charles F. Dolan School of Business.

According to a press release from the university, the $40 million facility, set to open in 2019, will "feature a simulated financial trading room, big data analytics lab, entrepreneurship center with ideation lab space, visualization and simulation lab, active learning and case-based classrooms, and more" and will "further position the Dolan School as a destination of choice for students looking for a business degree informed by Jesuit values."

The Dolan School of Business is one of the top 50 undergraduate business programs in the nation, according to Bloomberg Businessweek, and the best in Connecticut. The school's graduate programs in finance, marketing, and accounting are ranked among the top 25 in the nation by U.S. News & World Report.

“We are humbled and honored by the dedication and commitment of our alumni, parents, and friends,” said Mark Nemec, President of Fairfield University. “The extension of the Fairfield Rising Campaign ensures that Fairfield continues its rise as the modern Jesuit Catholic University, building a community animated by innovative teaching and learning, so that we may continue to best serve the world as it is.”

Other planned building improvements include a new dormitory, a new parking facility, an expansion of the campus center, and a new building for the School of Nursing and Health Studies.

ATCHISON, KAN. — Benedictine College in Atchison, Kansas, located in the "path of totality" for the Aug. 21 eclipse, celebrated with a series of events collectively titled "Total Eclipse of the Heartland."

The events included presentations by astronomers from the Vatican Observatory on the history of science and the church and on the science of eclipses, several masses, a "Celestial Concert" by the Benedictine College Music Department, and of course, the eclipse viewing itself.

The eclipse-viewing, hosted in the 2,800 seat football stadium and the surrounding fields, was completely sold out in advance.

The Department of Astronomy also rigged all of its telescopes for viewing of the sun, and made them available for the general public. The college had completed a new observatory, complete with four telescopes, just in time for the eclipse.

The eclipse was the culmination of Benedictine's yearlong "Century of Science" celebrations, which began in August 2016 to commemorate the 100th anniversary of the first science degrees offered at Benedictine.

VILLANOVA, PA. — Matthew Manion has been appointed faculty director of the Center for Church Management in the Villanova School of Business.

According to a press release from the university, "Manion is the former president and CEO of the Catholic Leadership Institute, an organization that provides world-class leadership training and consulting to the Catholic Church."

Manion spent 18 years with the organization, during which its annual revenue increased from $15,000 to $6.1 million and its staff from one to 26 full-time and 22 part-time employees.

The Center for Church Management conducts research, offers a master of science in church management and several non-credit programs for church leaders, and offers training in business ethics for the entire business school. They aim to strengthen the church by helping leaders steward resources and use facilities more effectively.

Manion will succeed Charles Zech, who founded the center in 2004 and will remain on faculty to continue his research on church administration and aid in the leadership transition.

In a statement emailed to the paper, a representation of Fairfield University said the school was "committed to providing a welcoming and inclusive community and in accordance with state and federal law, has accommodations for gender-neutral residences and bathrooms, as well as gender-neutral public restrooms available throughout campus."

Sacred Heart University also has facilities to accommodate transgender students, and has clubs and counseling for LGBT students.

“We embrace a positive view of (LGBTQ) identities and relationships by producing a safe space where people are free to express who they are without fear of reprisal, and we do our best to fulfill all requests for needed accommodations,” a university representative wrote. "At Sacred Heart, we are extremely inclusive, and we give people the freedom and resources to define, determine and declare who they are."