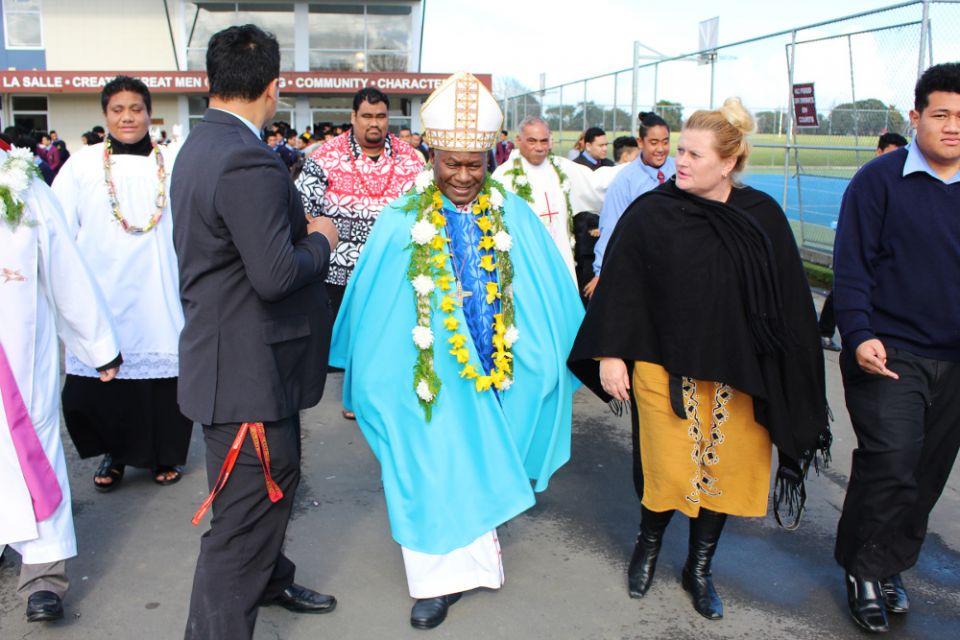 A cardinal from Papua New Guinea, an archbishop from New Caledonia, and four bishops from Australia and New Zealand served meals to people who are homeless, mentally unwell or otherwise economically deprived at the Auckland City Mission Aug. 11.

The prelates were in Auckland for a weeklong meeting of the executive committee of the Federation of Catholic Bishops' Conferences of Oceania. The meeting focused on protection of the oceans and the welfare of the people dependent thereon, as well as concerns for the people of West Papua, an Indonesian province.

In a statement, the church leaders described their time at the Auckland City Mission as "a humbling experience during which we felt deeply Christ's call to sit and walk alongside those who struggle or find themselves on the margins of society."

The day before their work at the city mission, the prelates visited De La Salle College in south Auckland, a high school with a predominantly Pacific Islander student body.

Cardinal John Ribat of Port Moresby, Papua New Guinea, was the main celebrant at a Mass for feast of the Assumption of the Blessed Virgin Mary, which was celebrated in advance so the church leaders could be included.

At the penitential rite during the Mass, a fine mat was place over the heads of school principal Myles Hogarty, head student Jason Eteru and Bishop Robert McGuckin of Toowoomba, Australia, as an expression of penance. The mat was removed from over the kneeling men by Ribat.

In his homily, Marist Fr. Brian Prendeville said no generation of young people since World War II has been as exposed to testing and attack as today's young people. He pointed to a recent media focus on youth suicide in New Zealand, trying to raise awareness of the pressures experienced by young people today.

Speaking the Oceania prelates, Prendeville said he knew that "you would want me to say these (following) things to these young men."

"But you are good. Let the good seed grow. You are God's work of art. And God does not make rubbish. ... God loves you."

The prelates later said the students' "enthusiastic participation in the liturgy uplifted our hearts."

Speaking about the ocean, the bishops of the Pacific said in a statement: "We are acutely aware of the impact of climate change on island nations, and some of our number have been visiting communities and recording the destruction of shorelines affecting them. On a happier note, we are heartened to learn of the systematic and coordinated opposition to seabed mining, which turns the ocean floor into a stage of exploitative destruction of ocean habitats."

Later, the bishops added: "Our interest in the 'blue economy' is to uphold a model of development that respects the fundamental importance of sustainability that looks way beyond any perceived short-term economic windfall."

"We are not 'anti-development.' We look to the common good and thus advocate for an integrated approach to development, where local customary practices are respected and communities are assisted to grow employment opportunities."

The second focus for the executive committee was "the livelihood and cultural integrity of the people of West Papua."

"We do not promote a view in regard to independence," the prelates said. "Indeed, we believe that where this question becomes a single focus, care to uphold and strengthen local institutions of democracy may be overlooked.

"We echo the call for quality education in Papua, for fair and transparent access to jobs, training programs and employment, for respect of land titles, and for clear boundaries between the role of defense and police forces and the role of commerce. The large majority of indigenous people of Papua seek peace and the various dialogue groups, advocating and witnessing to peaceful co-existence, are a source of hope for all."