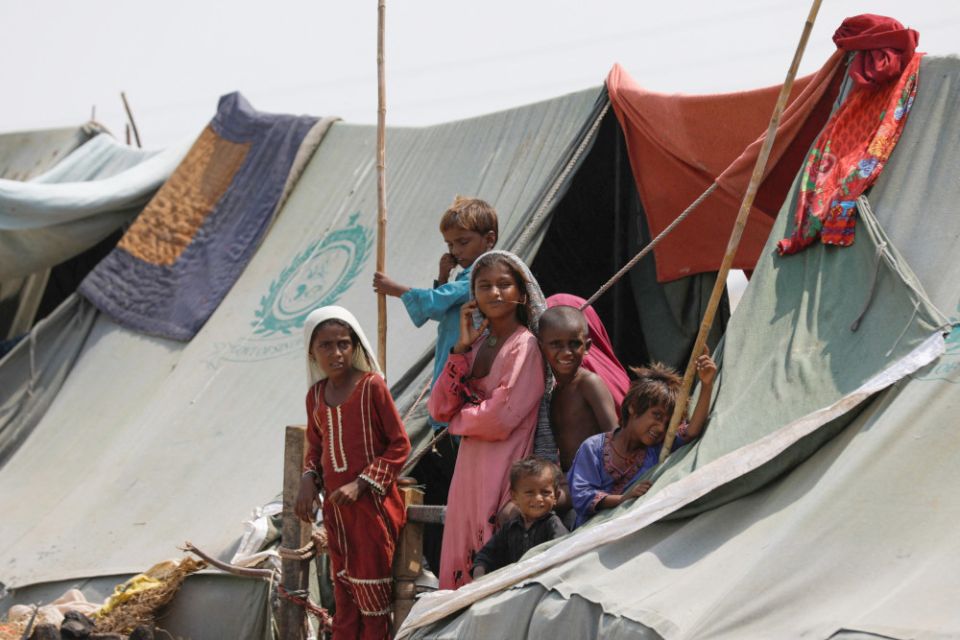 Children displaced by flooding stand outside their family tent while waiting for food handouts and relief material in Sehwan, Pakistan, Sept. 14, 2022. As of Sept. 15, Pakistan's disaster management office reported more than 1,500 people dead since half the country became submerged starting in June. (CNS photo/Akhtar Soomro, Reuters)

Three bishops of Pakistan dioceses most affected by recent deadly monsoon flooding appealed for more funding for emergency food, repairing damaged homes and providing medical needs for the worst-hit victims in their provinces. The South Asian country has been hit hard by record floods caused by monsoon rains and glacial melting since the rainy season started this summer.

But Archbishop Benny Travas of Karachi, Bishop Samson Shukardin of Hyderabad and Bishop Khalid Rehmat of Quetta also praised the generosity of local citizens and international aid groups during a virtual news conference hosted by the pontifical foundation Aid to the Church in Need on Sept. 15. Pakistani Christians, a minority, are mostly impoverished.

Rehmat described his sprawling province of Balochistan as all but cut off, because main roads connecting to major provinces and cities such as Punjab and Karachi have been flooded and bridges broken. He said four churches in his southwest vicariate, previously not as affected by the yearly monsoons as other parts of the country, are in remote mountain areas, and no church workers have been able to reach them.

As of Sept. 15, Pakistan's disaster management office reported more than 1,500 people dead since floods started in June, submerging at least a third of the country. It also said more than 33 million people (of the 220 million population) have been affected. More than a million houses have either been partially or completely damaged. And close to a million livestock have been lost. Pakistan is a world exporter of cotton, and much of those crops have been severely damaged. Widely reported estimates of recovery costs come to about $30 billion.

Shukardin said apart from help from locals in the neighboring Karachi Archdiocese, his diocese is receiving tens of thousands of dollars from aid groups in Austria, the Netherlands and other countries, as well as $200,000 from Aid to the Church in Need. He expressed concern for farmers in his province who pay land rent using the revenue they gain from selling crops.

"This time they will not pay them back," said Shukardin. "It means their debt will increase, and the bonded labor which is existing in Sindh province will increase broader than that."

Sindh province in the southeast has reported the most deaths and lost homes since the floods started. Shukardin said the money would go toward helping the farmers drain flooded land, procuring medicines to fight the expected rise in dengue and cholera cases due to unclean water and providing food aid.

Travas said the enthusiastic international aid response to the 2010 record monsoon flooding is far from being repeated this time around. He said in recent years, Pakistan has blacklisted a number of aid groups, and Caritas Pakistan is trying to fill the gap, but it operates under tight regulations and very close scrutiny from the government.

Travas said some parts of his diocese have not been as badly affected because the floods there have drained quickly, and many local citizens have stepped in to provide monetary and material aid.

"It's very depressing to see the same situation every day, to see (that) the people crying on the roads who never begged before have come to a stage of begging," he said. "So ... there is a kind of spiritual dryness that comes into one's life, yet at the same time the generosity of people, it has really shocked me. ... It is these occasions when you begin to realize that true misery sometimes puts you down, and yet at the same time the misery and the plight of the people is the same thing that forces us to unite and do something. That's, for me, the beauty of this: people who want to come forward, 'What can we do, how can we assist?'"

Shukardin agreed and said that, while the government is too focused on politics and not taking flood and disaster planning seriously, residents are banding together and uniting around helping one another.

Rehmat said he has been holding Masses and sent priests and religious sisters to various parts of the vicariate to accompany the displaced.

He said in the face of the daunting challenge of the country and of his flock: "We feel helpless, but spiritually our people are very strong. They have great faith because they know they will overcome all these difficulties."