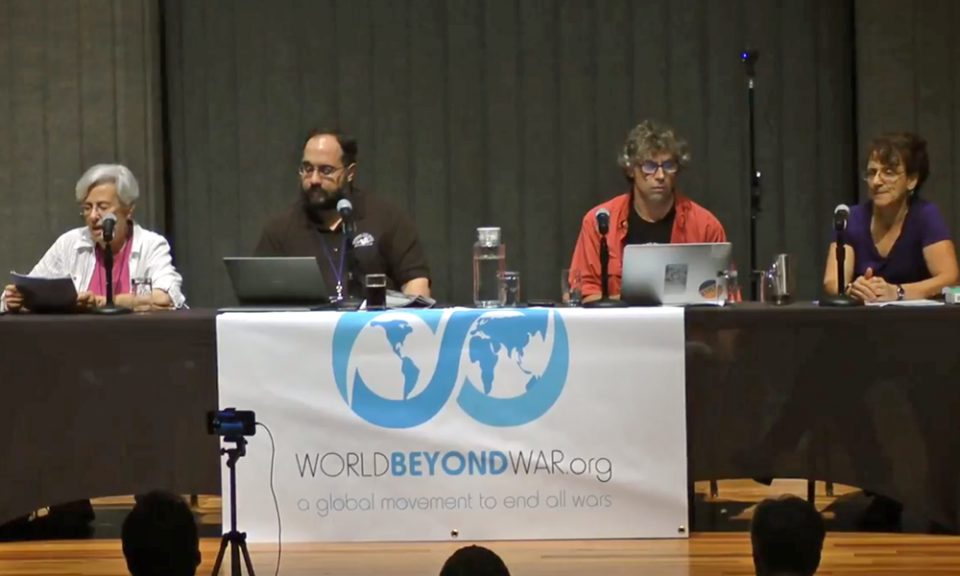 Screenshot from video of a panel on creative activism at the No War 2017 conference Sept. 24 in Washington D.C.; from left, moderator Alice Slater, and speakers Brian Trautman, Bill Moyer and Nadine Bloch

Creative, nonviolent opposition to war — on each other and on the environment — is what animates and motivates Bill Moyer. The Washington state activist was recently in Washington, D.C., for the No War 2017: War and the Environment conference that brought together these often separate movements for a weekend of presentations, workshops and fellowship.

The conference, held Sept. 22-24 at American University and attended by about 150 people, was sponsored by Worldbeyondwar.org, which bills itself as "a global movement to end all wars."

In 2003, Moyer founded the Backbone Campaign, based in Vashon Island, Washington. There, he leads trainings in the five disciplines of the group's "Theory of Change": artful activism, community organizing, cultural work for anti-oppression, storytelling and media making, and solutionary strategies for a just transition. The group's slogan is "Resist — Protect — Create!"

"Part of the dilemma is how to build a movement that is not merely ideological but is serving the intersecting interests of regular people," said Moyer, who studied political science and American philosophy at Seattle University, a Jesuit institution. Moyer's father had studied to be a Jesuit, and his mother was once a nun, so when he references the "preferential option for the poor" during a conversation about his activism — "that's at the heart of it for me," he said — it seems to roll right off his tongue.

"The big lesson in this movement is that people protect what they love or what makes a material difference in their lives," he said, which is why people often don't get involved until the threat is at their doorstep, literally or figuratively.

At the No War conference, Moyer sat on a panel on creative activism for the earth and peace with two other activists: Nadine Bloch, a training director for the group Beautiful Trouble, which promotes tools for nonviolent revolution; and Brian Trautman, of the group Veterans for Peace.

In his presentation, Moyer talked about adapting Sun Tzu's The Art of War — the fifth century Chinese military treatise — to the nonviolent social movement through actions like hanging a banner at a detention center that read "Who would Jesus deport" or blockading an Arctic drilling rig with a flotilla of kayaks.

This action, which he calls "kayaktivism," is a favorite method, Moyer said. He employed it most recently in September in the Potomac River, near the Pentagon.

Kayaktivism and the No War conference are intended to call attention to the extreme damage that the military does to the environment. The No War website lays it out in stark terms: the U.S. military uses 340,000 barrels of oil each day, which would rank it 38th in the world if it were a country; 69 percent of Superfund cleanup sites are military-related; tens of millions of land mines and cluster bombs have been left behind by various conflicts throughout the globe; and deforestation, poisoning of the air and water by radiation and other toxins, and crop destruction are frequent consequences of war and military activity.

"We need to sign a peace treaty with the planet," said Gar Smith, a cofounder of Environmentalists Against War and former editor of the Earth Island Journal. Smith spoke on the conference's opening plenary, where he and others noted the irony that militarism (with its dependence on fossil fuels) contributes to climate change, while the fight for control of fossil fuels (and the environmental destruction that creates) is a leading cause of war.

The slogan "No oil for wars! No wars for oil!" was prominently displayed on the podium throughout the conference.

"Most people think about war in dramatic Hollywood terms," said Smith, who recently edited the book The War and Environment Reader, limited copies of which were available outside the conference hall, along with tables piled high with literature, T-shirts, bumper stickers, buttons, and other paraphernalia. "But in real war, there is no final reel."

The destruction — to lives and the environment, Smith noted — is often permanent.

On the final day of the conference, Moyer said he is setting up a permanent training center for change agents on Vashon Island. He'll also be working on another project, Solutionary Rail, a campaign to electrify railroads across the country, to generate renewable energy along the rail lines.

He called the anti-war, pro-environment movement "a spiritual struggle that must be fought from a place of love," and lamented that what's really needed is a paradigm shift, from one in which everything is for sale — the air, water, "anything sacred" — to one in which the fundamental ethic is the realization that "we're all in this together."