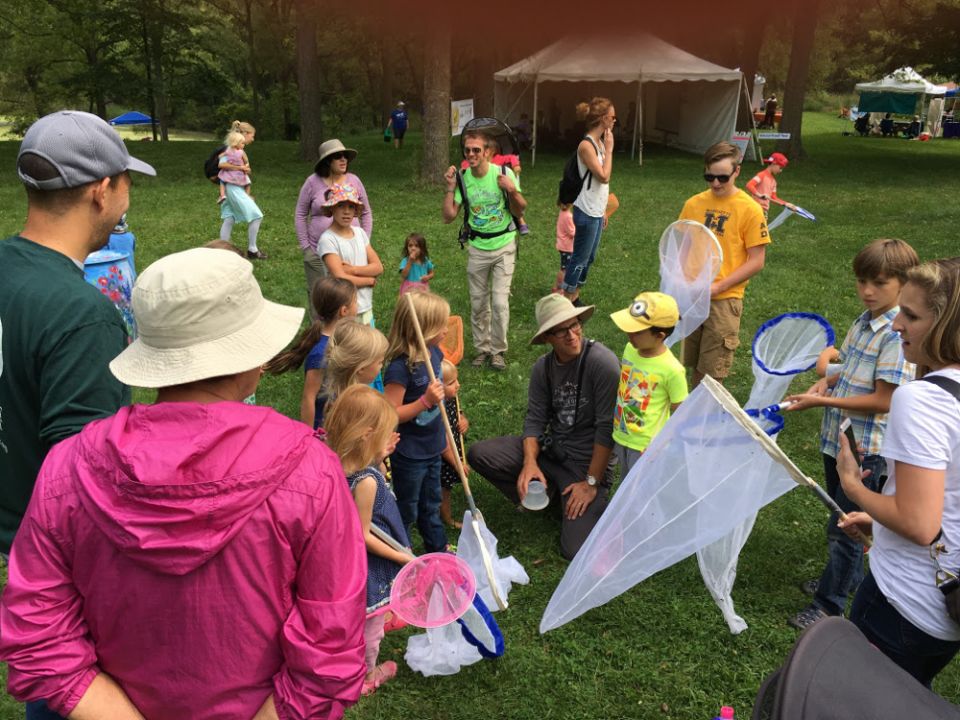 In the woods of Wisconsin, the spirit of Laudato Si' is alive and well.

On any given weekend around the Milwaukee area, you can find a group of Catholics out along hiking trails, taking part in conservation projects or, in the case of a recent excursion, tapping trees to make maple syrup.

The activities are arranged by the Laudato Si' Project, a local nonprofit inspired by "Laudato Si', on Care for Our Common Home," Pope Francis' 2015 encyclical on the environment and human ecology. The project was formed by Marquette University High School science teacher Joe Meyer.

The mission of the project, as Meyer simply summarizes, is "to restore people's connection to the natural world." To do that, it focuses on three core themes: education, stewardship and recreation.

Since the Laudato Si' Project formed in February 2016, about eight months after the encyclical was published, Meyer has led numerous outdoor expeditions — hikes on foot, skis and snowshoes along the Ice Age National Scenic Trail, a nighttime owl prowl in Cedarburg Bog, catching butterflies in prairie fields — and its members have amassed nearly 1,000 hours of volunteer conservation work. All of their adventures are documented on the project's website and blog.

"LSP showed me that we can have amazing wild spaces close to home if we learn to let nature live alongside us," said Jacob Baisden, now a freshman at St. Norbert College in De Pere, who became active with the Laudato Si' Project while at Marquette High.

The idea for the Laudato Si' Project came at a time when Meyer, 34, sought greater integration between two of his passions: his Catholic faith and ecology. He had taught catechism classes and spent time in conservation work — at one point, working for several years in national parks — but the two often remained separate worlds.

As Meyer began paging through church teachings on the environment, he found the integration he desired in the lives of St. Francis of Assisi and St. Kateri Tekawitha, along with the writings of bishops and from Popes John Paul II and Benedict XVI and the early works of Pope Francis. He wondered how much other people knew of them, and felt more should. 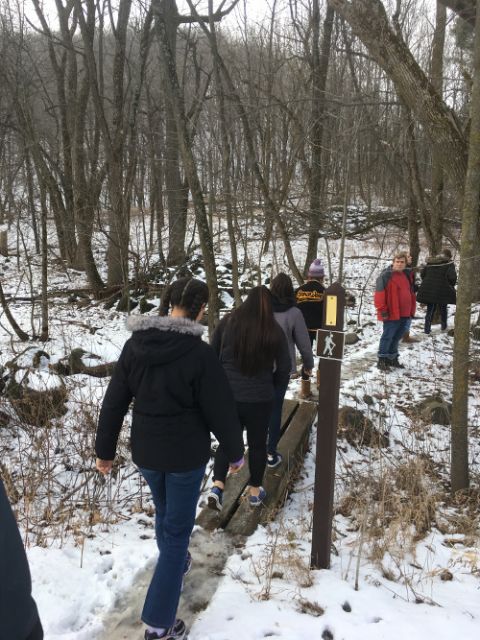 "That's when it came together for me, that, OK, I need to do something more tangible, more organized," he told NCR.

In one encyclical passage that Meyer regularly cites and is featured prominently on the project's website, Francis states, "Living our vocation to be protectors of God's handiwork is essential to a life of virtue; it is not an optional or a secondary aspect of our Christian experience."

It's a point Meyer stresses at parish presentations and retreats, that environmental stewardship isn't something Catholics are called to do if they have time or money, but something "we strive for" daily.

"We as Catholics should be at the forefront of living this out. This idea that if this is flowing from our faith in God, we should be leading," he said.

To help people recognize that obligation, the Laudato Si' Project often begins by getting participants, especially children and teens, out into nature. Their treks often take groups into southeastern Wisconsin's Kettle Moraine area of rolling hills and valleys formed by glaciers thousands of years ago. Meyer believes such experiences can spur excitement and a personal connection with nature that can become the foundation for conversations about conservation and also about God.

"So often, we do it the wrong way; we talk to them from the top down about all these environmental problems, and then we say, OK, good luck. Well, that hasn't worked," he said. "So I guess our approach is let's talk about why we're called to this, let's get them excited and connected to nature, let's give them that awe and curiosity that God places in all of us for the natural world. That's what's going to sustain them in care for our common home. That's going to sustain them in making decisions that might mean simplifying their life or might mean a sacrifice."

Francis said much of the same throughout Laudato Si': "Only by cultivating sound virtues will people be able to make a selfless ecological commitment" (211) and "If someone has not learned to stop and admire something beautiful, we should not be surprised if he or she treats everything as an object to be used and abused without scruple" (215).

One of the central areas where the project has put Laudato Si' into action is the Schoenstatt Retreat Center in Waukesha, run by the Schoenstatt Sisters of Mary. On the 200-acre property, some of it rented out as farmland, the project has already cleared two nature trails through the dense woods surrounding the retreat center, put in place nesting boxes for bluebirds and kestrels, removed invasive plant species, and planted a butterfly garden (which they've done for schools, too). More recently, they have worked on prairie restoration.

"One of the great benefits is that the Laudato Si' Project really helps to restore and preserve the beautiful landscape and nature that is inherent to this part of Wisconsin," said Sr. Joanna Buckley, provincial superior for the Schoenstatt Sisters. She explains that Schoenstatt is German word meaning "beautiful place," and the sisters are "attentive to having a beautiful environment for the people to encounter God."

In October, seventh-grade students from St. John Vianney Catholic School in Brookfield came to the Schoenstatt center for a daylong retreat co-led by the Laudato Si' Project. Part of the day they spent in a nature service project removing invasive buckthorn trees from the woods.

"It was a really effective way for them to have a hands-on tangibility of what it means to care for creation," said Claire Hoffmeyer, director of youth ministry for St. John Vianney Parish.

Hoffmeyer worked with Meyer last year to revise the formats for the seventh- and eighth-grade retreats to be focused on care of creation. "It's one of those elements of our spirituality that the sooner we know about it the better off we are," she told NCR.

At each retreat, there was a brief overview of Laudato Si'. Hoffmeyer said many of the 80-plus students were surprised by how little they had previously considered their responsibility as stewards of creation, and that they viewed stewardship through the scope of money. Since then, they've come to see it as something they can do daily, whether by taking shorter showers, turning off lights or picking up litter.

"I think their minds were kind of blown," she said.

So far, the Laudato Si' Project has partnered with a dozen Wisconsin schools. But its focus isn't limited to youth, as Meyer has spoken at numerous parishes in the Milwaukee Archdiocese. In these experiences, he's sensed a general awareness of church teaching on stewardship of creation, but less about what that means and even less about the encyclical.

"To call yourself a Catholic, you need to get involved in helping to stop the environmental crisis."

He chalks part of that up to an inclination in America to view environmental concern through political lenses, and as more of a liberal issue. But Meyer has found that misconception breaks down fairly quickly once people see the connections with past church teaching. Slowly, he's seen momentum grow for creation care and it taking root in the culture of parishes, schools and families he's worked with.

"Some of the things I tell people is don't let being perfect keep you from doing good. So start small, but do something," Meyer said.

Beyond the church, the Laudato Si' Project has worked to take on a larger role in the community. It has partnered with nearly a dozen outdoor and conservation groups. One of those, the Green Alliance, it joined in August in hosting a Sustainability Fair. This winter, it sponsored a candlelight hike through the snow at a winter carnival held at the Heiliger Huegel Ski Club.

More than anything, the Laudato Si' Project's goal is for people and families to have fun outside in nature. "In our society, we've gotten rid of that recreational time," Meyer said. "Time sitting and relaxing out at a park or going for a walk, that's [viewed as] wasted time because you could be doing something productive." 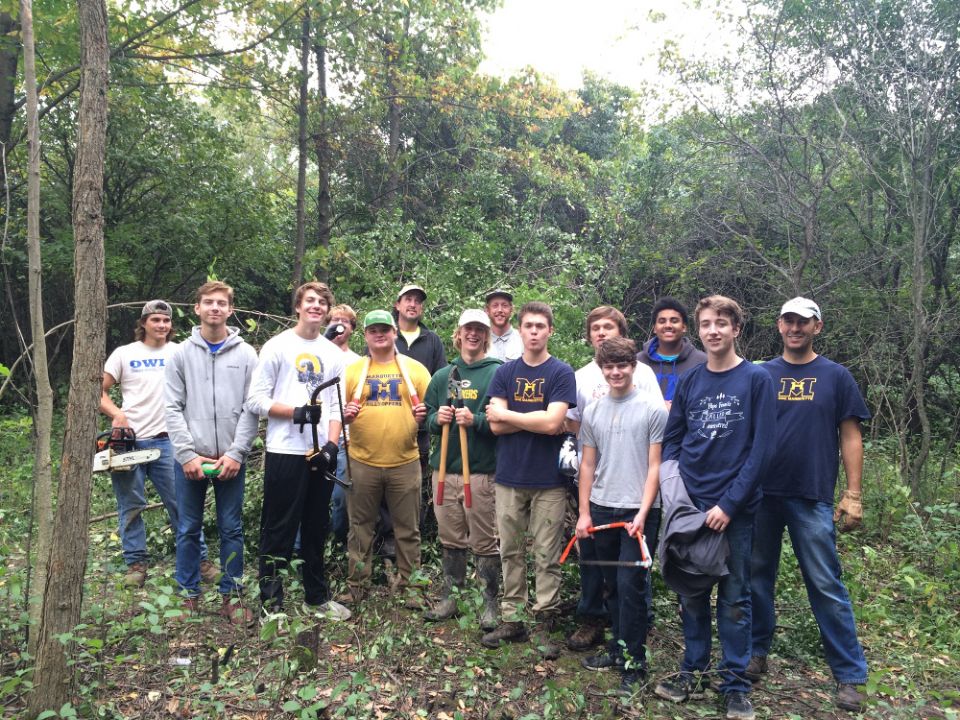 Around Earth Day last year, the project created a Care for Our Common Home patch that Scout troops, families or anyone can earn by completing a series of education and stewardship exercises. That same month, it recognized Baisden, 19, with its Student Stewardship Award for his participation in conservation and recreation activities. The award was made even sweeter by including a quart of Meyer's homemade maple syrup.

"LSP has shaped my faith in showing me how directly involved we need to be in caring for our environment," Baisden told NCR. "To call yourself a Catholic, you need to get involved in helping to stop the environmental crisis."

As for the future, the Laudato Si' Project, which relies on donations and memberships to fund its programs, doesn't have plans to grow to a certain size or expand across a larger geographic footprint. Instead, Meyer is content to continue working in their niche of Wisconsin "doing what we can here where we can." So far, that appears to be enough.

"I don't know to what extent Pope Francis is aware of the Laudato Si' Project," Buckley said, "but I think he'd be really happy with it."

This story appeared in the April 6-19, 2018 print issue under the headline: Natural connections .