Pope to hear from indigenous about ministry, land rights in Chile, Peru

by Barbara J. Fraser, Catholic News Service
This article appears in the Francis in Chile and Peru feature series. View the full series. 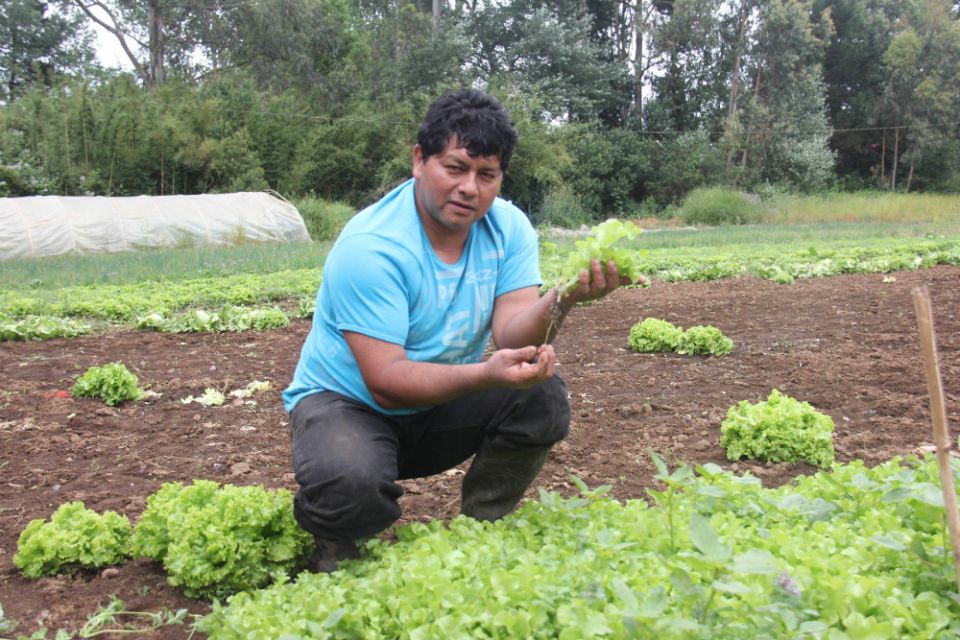 TEMUCO, Chile — Sergio Catalaf's son was just 3 days old when police arrested the Mapuche Indian leader, accusing him of terrorism. He and 10 other Mapuche leaders spent 14 months in preventive detention before being acquitted in October of setting fire to a farmhouse in which an elderly couple died.

Sitting in his simple wooden house, cradling the child on his lap as a light rain fell outside, Catalaf said he and others have been targeted unjustly because they are defending their people's right to their ancestral territory.

He would like Pope Francis to speak out about that when the pontiff visits Temuco Jan. 17.

Pope Francis' weeklong trip to Chile and Peru in January will take him to two regions that are among those countries' poorest, where environmental issues and demands for indigenous land rights have led to sometimes-violent conflict.

In the Araucania region of southern Chile, Mapuche communities have been stripped of their land repeatedly — first by Spanish colonists, then by settlers who moved to the region to farm, and more recently by timber plantations.

The pope will celebrate Mass here and share lunch with a small group of "simple people, ordinary people from the region," according to Bishop Hector Vargas Bastidas of Temuco.

Vargas said he expects the pope to bring a message "of hope, that hearts may be opened to peace, justice and dialogue." 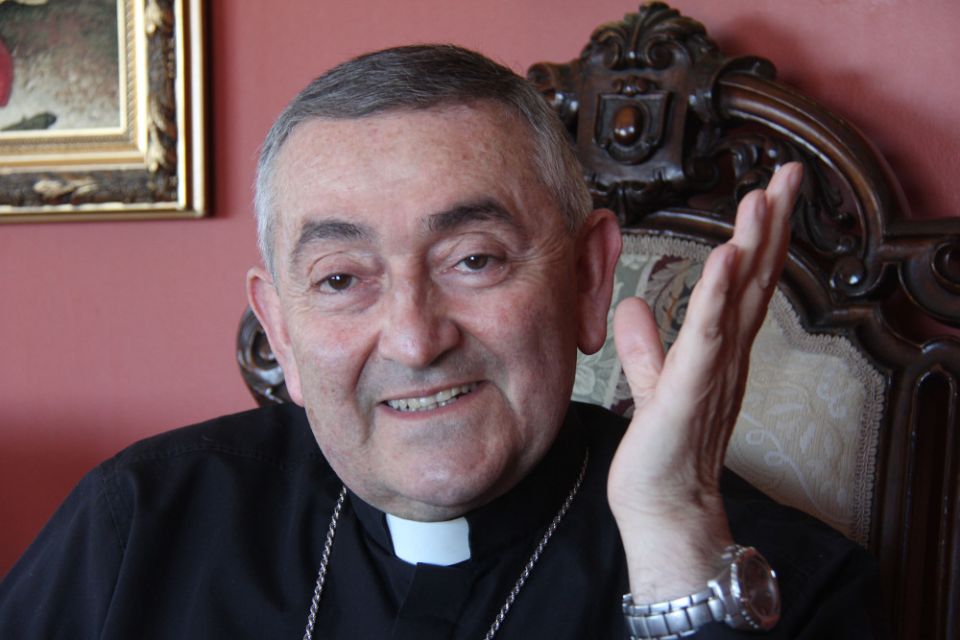 Bishop Hector Vargas Bastidas of Temuco, Chile, who will welcome Pope Francis to his diocese on Jan. 17, gestures during a Dec. 10 interview. (CNS/Barbara Fraser)

Pope Francis is slated to meet with Amazonian indigenous people in Peru's southeastern Madre de Dios region Jan. 19. His visit comes at a time when Wampis and Achuar people in Peru's northern Amazon region, as well as groups in other parts of the country, are seeking greater autonomy and territorial rights.

Those rights are at the heart of conflicts in southern Chile, where protests have been marked by violence in recent years. Besides the burning of the home in the case in which Catalaf was acquitted, protesters have burned evangelical and Catholic churches, although indigenous leaders also have received support from the church.

The construction of hydroelectric dams on the Biobio River displaced indigenous communities and remains contentious, and recent decades have seen the expansion of pine and eucalyptus plantations across vast areas of southern Chile.

The plantations have depleted local water supplies and occupied areas claimed by Mapuche communities. Although they provide some local jobs, a study in 2016 found that plantations have done little to reduce poverty in the Araucania region, which remains one of the poorest in Chile.

Plantations have displaced indigenous people, who traditionally farmed, fished or raised livestock. They also have left little of the native forest that is the center of Mapuche spirituality, said Isolde Reuque Paillalef, a Mapuche woman and coordinator of indigenous ministry for the Diocese of Temuco.

The Chilean government has been purchasing or allocating state land to be turned over to Mapuche communities that have documents proving rights predating the arrival of settlers. But some communities have received land that is too far from their communities to be of practical use, or that lacks water and electricity, she said. In other cases, the cost of moving to the new land and building houses is prohibitive.

Nevertheless, Mapuche communities maintain their identity and their traditional religion, particularly the "nguillatun," a communal ritual that strengthens and renews bonds among the community members, Reuque said.

"This is a people of faith, which, despite everything, has not lost its values, its love for the earth and its own identity," she said.

Some bishops and priests are reluctant to support the movement to strengthen indigenous identity and traditional rituals, Reuque said, but others have embraced it.

Just outside the city of Temuco, Fr. Juan Antonio Gonzalez lives in a simple, wooden house in an area the diocese has designated as a Mapuche parish. Like his neighbors, he tends a flock of chickens in a pen beside his home.

He has no plans to build a church building for people whose traditional place of worship has been the forest. Instead he visits the communities scattered throughout his parish, including more than a dozen that have Christian communities founded more than four decades ago, when Maryknoll missionaries from the United States worked here.

"That network of Christian communities is what most strengthens the Mapuche culture," Gonzalez said. "Our work is to accompany the Mapuche people, supporting the good initiatives that spring from them" and strengthening their cultural identity.

"The Mapuche people's demands are just," he said, adding that although the Chilean government and the Mapuche people must resolve them, the Catholic Church can help by encouraging dialogue.

Pope Francis will hear similar concerns about territorial rights, environmental damage and the need for indigenous ministry when he travels to Puerto Maldonado, in the southeastern Peruvian Amazon, Jan. 19.

Home to some of the world's most biodiverse parks, that area has been devastated by a gold rush that has left large expanses of barren land pockmarked with pit mines. The wildcat mining has led to forced labor, trafficking of women and girls for prostitution, and one of the highest murder rates in the country.

Indigenous people from vicariates throughout the Amazon will travel to Puerto Maldonado for a meeting with the pope. Most will be leaders of Christian communities in their parishes or villages. Some will be from areas where communities have suffered oil spills or invasion by wildcat gold miners, while others have seen their forests razed and replaced with oil palm plantations.

Amazonian indigenous communities are among the poorest in the country, and often lack basic services such as safe water, sanitation and electricity.

The lack of basic services, along with poor schools and scarce job opportunities, drives many indigenous people to cities. They often live in the most impoverished urban neighborhoods.

Many conceal their indigenous roots to avoid discrimination, Rosa Pacaya, who leads a Christian community in La Inmaculada parish in the northeastern city of Iquitos, told CNS.

Pacaya lives in Masusa, a riverside neighborhood of houses built on stilts, which floods each year during the rainy season. The houses lack running water and sewage systems, and trash collects in the streets and under the buildings when the water recedes.

Most men in Masusa work informally, loading and unloading riverboats in the nearby port, while women care for their children and do odd jobs. Pacaya cooks and cleans in other people's houses or scavenges scraps of wood behind a sawmill to sell for firewood.

The stress of daily life takes a toll on families and leaves people little energy for mobilizing to demand better living conditions, she said.

A priest visits the chapel in her neighborhood once a month to celebrate Mass. On the other Sundays, she leads the Liturgy of the Word and catechism classes. By working with children, she hopes to draw the rest of the family into the Catholic community.

Ministry among indigenous people in both rural and urban areas requires a church with an indigenous face, said Divine Word Fr. Fernando Diaz Fernandez, who works in the parish in Quepe, a town about eight miles from Temuco.

EarthBeat | Pope to hear from indigenous about ministry, land rights in Chile, Peru