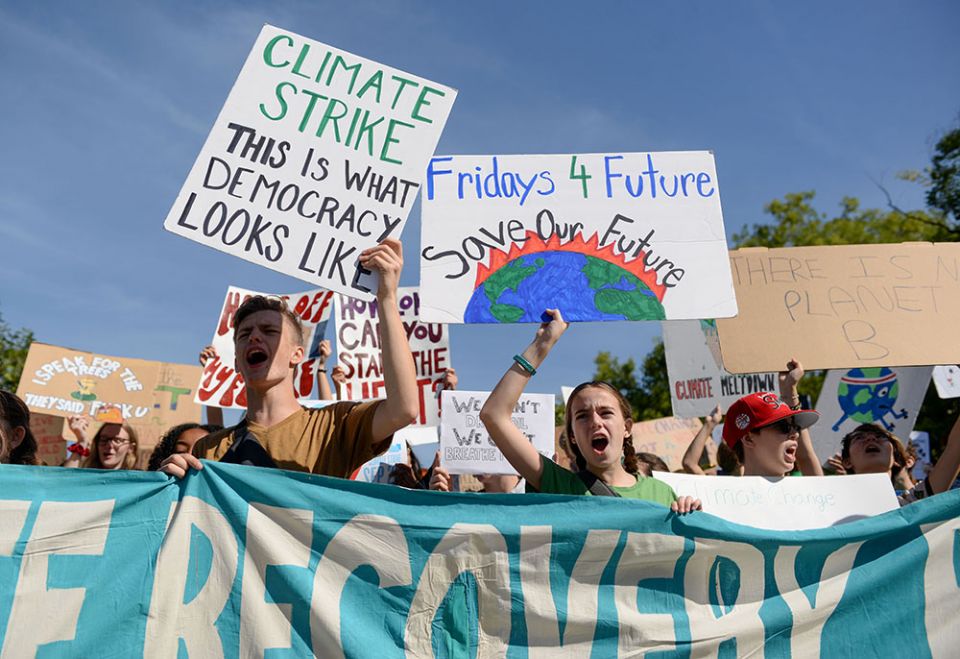 The suggestion came during a webinar April 27 hosted by Georgetown's Initiative on Catholic Social Thought and Public Life.

The conversation shed light on dissatisfaction that young Catholics and others have with how bishops and priests have largely failed to engage church teaching on creation care, and so far have approached climate change less as a matter of moral importance and more as a political flashpoint to be avoided.

Anna Robertson, director of youth and young adult mobilization with Catholic Climate Covenant, cited recent polling from the Springtide Research Institute showing that 74% of young Catholics (ages 13-25) are concerned about environmental issues, and a separate survey by the British medical journal The Lancet showed overall 84% of young people ages 16-25 globally are worried about climate change, with half reporting negative day-to-day impacts on their lives.

"This is a huge concern, and this is a really pastoral crisis for our church," Robertson said. "Young people want to see our joys and hopes and our griefs and anxieties reflected in the church and embraced by it."

So far, that hasn't happened around climate change.

A study last year by researchers at Creighton University that reviewed 12,000 bishop columns from 2014 to 2019 — a period spanning one year before and four after Pope Francis issued his encyclical "Laudato Si', on Care for Our Common Home" — found less than 1%, or 93, mentioned climate change. In contrast, bishops addressed issues of religious freedom and abortion more than 1,500 times.

Dan DiLeo, a theologian at Creighton and one of the researchers, said the results show that U.S. bishops are failing in their responsibility to share the fullness of the Catholic faith, including teachings on creation care dating back to the Book of Genesis and St. Francis of Assisi and articulated by every pope since Paul VI.

DiLeo said it was important for Catholics to recognize not just a moral responsibility to respond to climate change, but that the church has "an extraordinary opportunity to take action" to reduce heat-trapping greenhouse gas emissions and expand ecological awareness through its vast structure and network of parishes, schools, health care centers and more.

"I think the most significant thing that young Catholics can do, frankly, is to advocate that the bishop commits the diocese to net-zero emissions," he said.

So far, approximately two dozen U.S. Catholic dioceses have expressed a commitment to the Vatican's Laudato Si' Action Platform, a multiyear churchwide initiative to respond to Francis' calls in his encyclical for all people to work to better care for creation. Among its recommended actions for Catholic institutions is achieving carbon neutrality, where emissions are reduced to zero or balanced with carbon offset programs.

Silence among bishops on climate change isn't limited to the United States. Suzana Moreira, a theologian based in Brazil and coordinator of the Laudato Si' Movement's eco-conversion programs, said that when she attended youth ministry events in the past, "there was always this huge concern with our bodies."

"The social and environmental teachings of our church are just as important as Catholic teaching on sexuality," she said.

The Georgetown conversation brought together voices from across generations, continents and roles.

Sharon Lavigne, a grandmother of 12 in southern Louisiana and founder of Rise St. James, a grassroots environmental justice group, shared her story of fending off highly polluting industrial plants in a part of the state referred to as "Cancer Alley."

"We've been living here all of our lives, and we didn't realize that industry was so powerful and industry was poisoning the people in St. James, especially in the fifth district," she said.

Lavigne, who will receive the Laetare Medal from the University of Notre Dame later this month, said that the high rates of air pollution and cancer from nearby polluting industries has made her community "a sacrifice zone" and threatens the ancestral lands that she and others had hoped to pass down to future generations.

Lavigne said it was especially important to educate children about environmental issues like those facing her community in school and religion classes, a topic she has discussed with Baton Rouge Bishop Michael Duca.

"We need to educate the people on what's going on," she said.

The panelists agreed that meeting with their local bishop should be a priority for young Catholics who want to see their church take a larger role around climate change. They also shared ways to find hope and inspiration amid the despair and anxiety that can often accompany climate change.

Moreira said she's been inspired by a group of friends from a poor district in Rio de Janeiro who enrolled in the Laudato Si' Movement's animator program. Offering advice to young climate leaders in the U.S., she suggested they "don't forget to pray, don't forget to party," meaning to center their work in prayer and to make time to celebrate life and even small successes in climate activism and action. A third idea: learn a second language.

Robertson invited young Catholics to get involved with the Covenant's youth programs, including an upcoming legislative initiative with U.S. senators. Whatever the action, she encouraged her peers to find ways to be engaged even while "calling on the church to step up its game."

Despite dire predictions around climate change and humanity's future, it's important to remember we are not beyond hope, she added.

"We are not beyond redemption in this climate fight. We can be a beneficial species on the Earth," Robertson said.