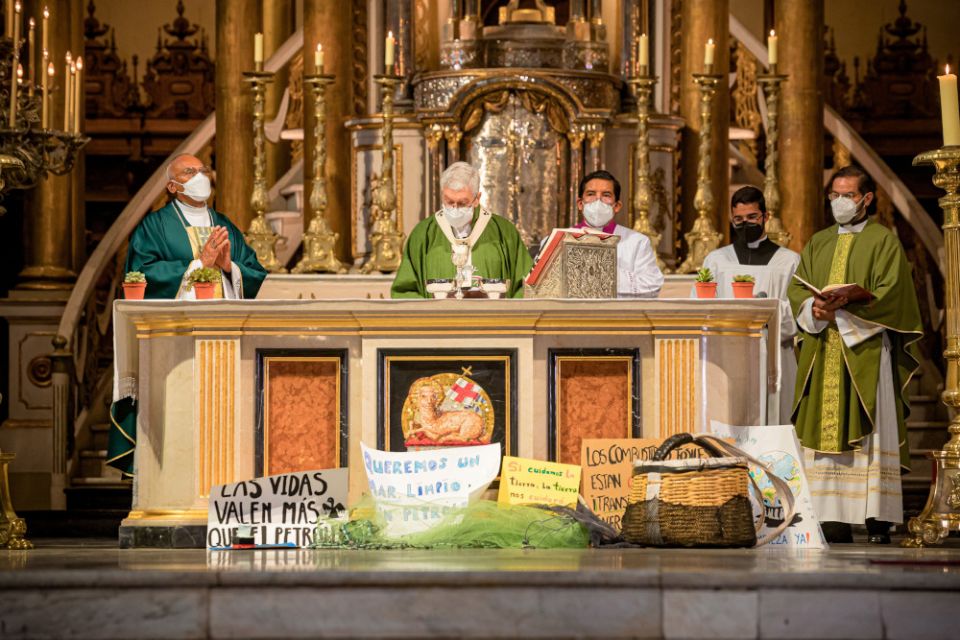 Iquitos, Peru — Oil spills on opposite sides of Peru — one near Lima, the coastal capital, and the other in a remote Indigenous village in the Amazon — brought together Catholics in the two regions for simultaneous Masses Feb. 13.

They prayed for those suffering from the pollution caused by both spills as they marked the second anniversary of Querida Amazonia, the papal exhortation issued by Pope Francis after the 2019 Synod of Bishops for the Amazon.

The liturgies, accompanied by video messages exchanged by Bishop Miguel Angel Cadenas of Iquitos and Archbishop Carlos Castillo Mattasoglio of Lima and played at each of the Masses, formed the first such joint initiative between bishops in Lima and the Amazon.

In January, similar disasters struck the two regions. A ship offloading oil Jan. 15 at a coastal refinery spilled about 6,000 barrels of oil into the Pacific Ocean, fouling at least 30 miles of shoreline. On Jan. 20, vandals cut an oil pipeline in a small Amazonian village, contaminating the river that people depend on for water for drinking, cooking and bathing.

At the end of the Mass in Iquitos, Gilter Yuyarima described the impact of the oil spill on residents of Nueva Alianza, the village of Kukama and Urarina people where he is a leader of the Catholic community.

Cleanup has been slow, and heavy rains have caused the oil to spread through the forest and into the river that is the community's water source, he said, adding that mothers and children are suffering most.

The Mass in Lima included Indigenous residents of the city and small-scale fishers who lost their livelihoods and a key food source when the spill from the tanker fouled their fishing grounds. Several of them presented a net as an offertory gift.

Both bishops noted that the oil spills in their regions had the greatest impact on people whose lives were already precarious. 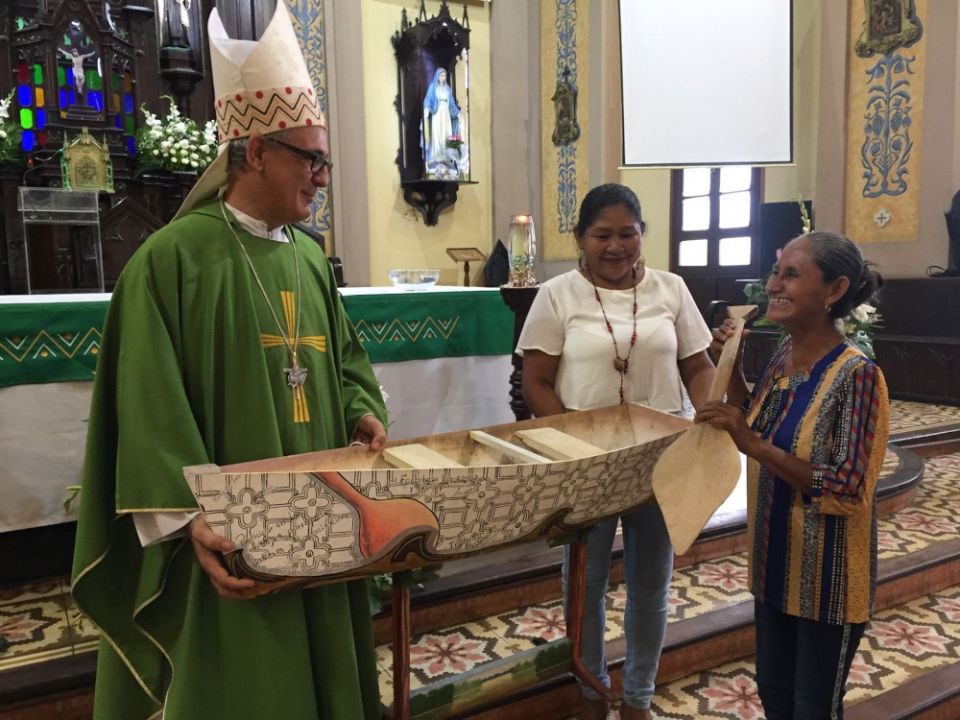 Bishop Miguel Angel Cadenas of Iquitos, Peru, talks with Emilsen Flores (right) and Mari Luz Cañaquiri, leaders of a Kukama women's organization, after a Feb. 13, 2022, Mass in Iquitos. The canoe model was presented during the offertory. (CNS/Barbara Fraser)

In his homily, Archbishop Castillo said, "We have a commitment — our city of Lima and our entire coast — to our Amazon region."

Bishop Cadenas, in his message to Catholics in Lima, recalled that the Book of Genesis describes how God gave humans the responsibility to care for creation, adding, "We want to leave the planet to the next generation in at least the same condition in which we inherited it."

Bishop Cadenas has been outspoken on environmental issues for more than two decades, especially after oil spills affected communities scattered along the Marañón River in rural Santa Rita Parish, where he and Augustinian Father Manolo Berjon were pastors. They began to address environmental problems in parish workshops for leaders of Catholic communities in villages along the rivers.

In 2015, when the two moved to the edge of Iquitos, a city of about half a million people, they discovered a new set of urban issues. Their parish included vast neighborhoods of houses built on stilts to raise them above seasonal floodwaters, but with no sewer or water service. 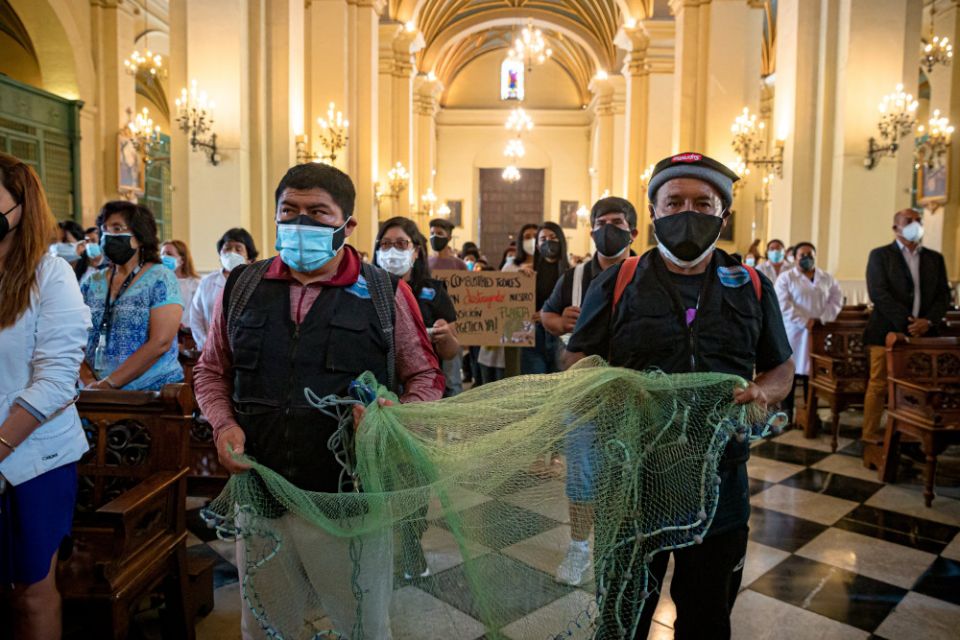 Fishing families affected by a January oil spill on the Peruvian coast offer tools of their labor during the offertory during Mass Feb. 13, 2022, in the city's cathedral. (CNS/courtesy Archdiocese of Lima)

Several neighborhoods were constantly inundated with sewage and waste from a slaughterhouse and a nearby hospital. With the vicariate's support, the neighborhood associations sued the government for public services, a case scheduled to be heard Feb. 18 by Peru's national Constitutional Tribunal.

The two men have especially pursued cases that have had implications beyond the local area, involving issues such as oil pollution, lack of public services and the right of Indigenous communities to consultation about projects that would affect them, Bishop Cadenas told Catholic News Service.

Their work was inspired by their understanding of Christianity, he added, noting that environmental issues cannot be separated from health and basic rights.

Along the way, "we've learned to have patience," he said, as Father Berjon added, "geologic patience," because of the slow pace of progress, especially in court cases. 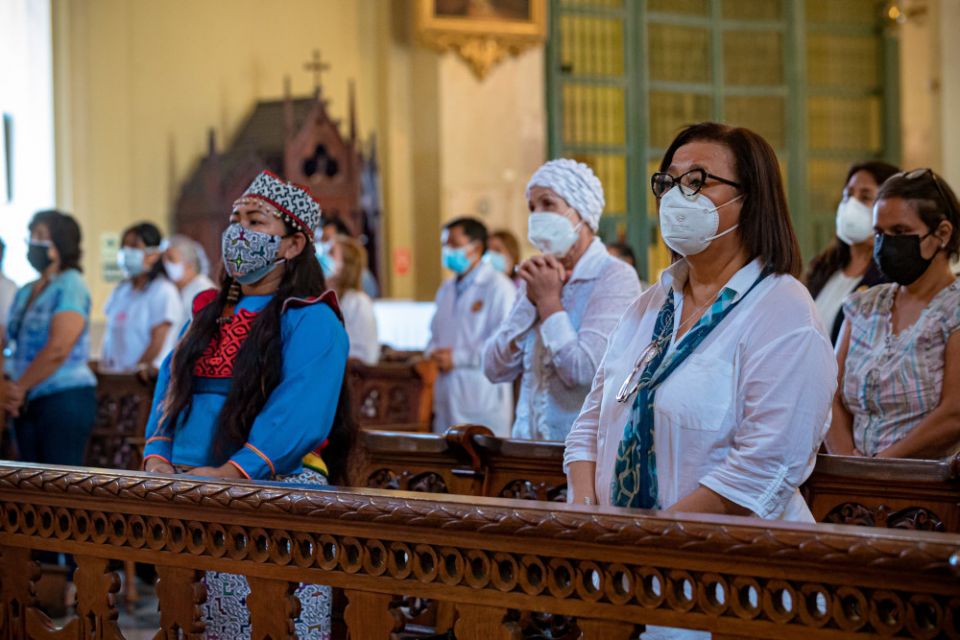 An Indigenous woman is among the people praying in the cathedral in Lima, Peru, during Mass Feb. 13, 2022. (CNS/courtesy Archdiocese of Lima)

The fact that judges have ruled in favor of local communities in cases involving oil spills and consultation about a controversial river dredging project has convinced them that their efforts have been worthwhile, despite resistance from government officials and even accusations of terrorism, Bishop Cadenas said. Having a strong network of allies has helped them weather the rough spots.

"We've learned to pray," he added, "because there have been some very, very, very conflictive situations."

Above all, Father Berjon added, "we've learned that in one way or another, the reign of God is at hand."