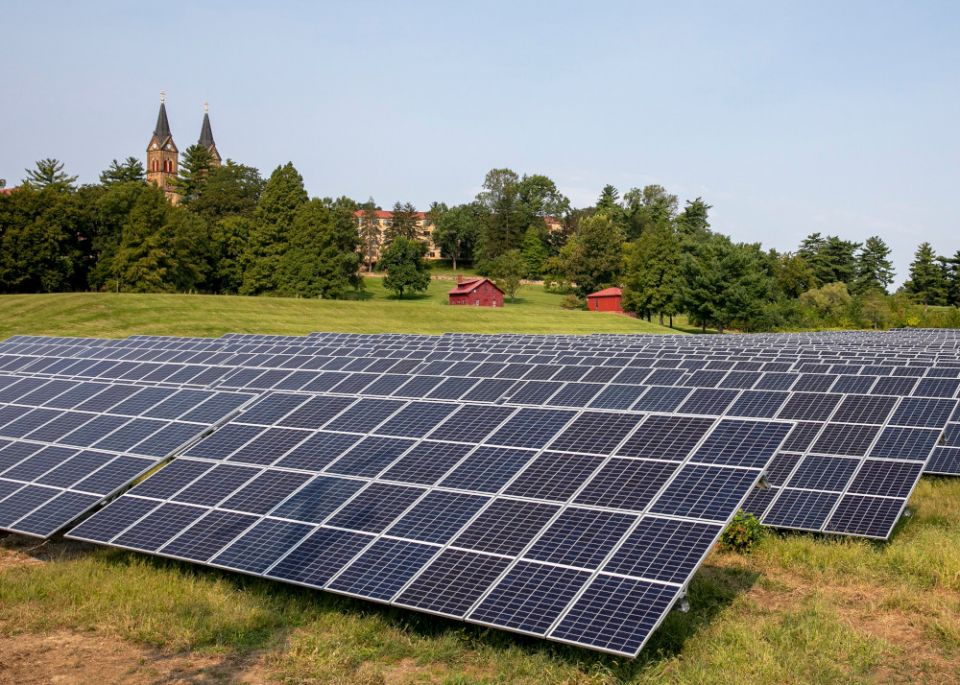 Indianapolis — Students at Cardinal Ritter Jr./Sr. High School in Indianapolis ordinarily grow in knowledge through the work they do in the school's classrooms.

But starting this semester, Cardinal Ritter's roof is contributing to the students' education as well.

Twenty-eight solar panels have been installed on 1,000 square feet of the school's roof, but they aren't simply reducing Cardinal Ritter's carbon footprint and electrical costs.

They're also being integrated into lesson plans in its science and theology classes to help students learn about renewable energy and how care for creation is an important aspect of the Catholic faith.

"We're asking our students to do God's work. And so, we're trying to model that," said Caroline Sperry, a Cardinal Ritter science teacher. "I tell the kids that I compost at home. I drive hybrid vehicles. I do what I can. I'm not just talking about it. I'm trying to put my faith into action."

Elsewhere in the Archdiocese of Indianapolis, the solar panel technology of today is at work at a monastery rooted in centuries-old tradition.

The fact that the cost of solar panels has decreased by 60% these days "really solidified" the project for the archabbey, said Mark Hoffman, physical facilities director. "But, in the end, it was a good thing to do for the environment."

At Cardinal Ritter, Sperry told The Criterion, the archdiocesan newspaper, that she is determined to help students learn about the science behind the school's solar panels.

The lesson will happen in part through a mobile device application that can show students real-time data about the energy being produced by the solar panels.

Cardinal Ritter president Jo Hoy also noted that the panels will be physically accessible for students to see, including those from grade schools in the area.

Hoy also noted how the solar panels will be integrated into science lesson plans at St. Michael-St. Gabriel Archangels School and St. Anthony School, which are both overseen by Cardinal Ritter.

The high school long had an interest in installing solar panels and other energy-saving initiatives, according to Hoy.

"It had been on our radar," she said. "We just financially had other needs ahead of that, because it isn't cheap."

Then Ryan Iannucci, a member of Immaculate Heart of Mary Parish in Indianapolis, approached the archdiocese's Office of Stewardship and Development about his interest in helping make solar panels a financial reality for a school in the archdiocese.

"I wanted to help the younger generations understand that some of the older people do care about the world we're handing them," said Iannucci. "I wanted to demonstrate that and help them be aware that the pope himself has made this a priority."

'Our hope is that we can be a source of inspiration for others to take the steps to be good stewards of the land.'

Inanucci hopes that the solar panel effort at Cardinal Ritter will motivate "the younger generation so that they choose careers and make life choices that help the earth. Hopefully they're having discussions with their parents about it as well."

At St. Meinrad Archabbey, the solar panel installation is just the one of the latest innovations for the monks, who have always been forward-looking in using the resources with which they have been blessed.

In 1890, they had a power plant built on their campus to provide electricity for the monastery, its seminary and other buildings.

Later developments included the monastic community developing a water utility and wastewater treatment facility for itself and the adjacent town of St. Meinrad.

All of this progress, Benedictine Archabbot Kurt Stasiak noted, flows from St. Meinrad Archabbey's faithful following of the 1,500-year-old Rule of St. Benedict, which calls monks to regard tools used in secular work "as sacred vessels of the altar."

"Every generation of monks, as Benedict encourages the abbot to do, brings out some of the old and some of the new," said Archabbot Kurt, who has led the archabbey since his election in 2016. "They try to keep pace with the progress being made to support and strengthen some very traditional values."

Hoffman noted that the solar panel initiative follows upon other efforts at the archabbey aimed at lessening its carbon footprint.

The campus has moved entirely to LED lighting. And a geothermal heating and cooling system is now in place for the monastery and its Our Lady of Monte Cassino Shrine. 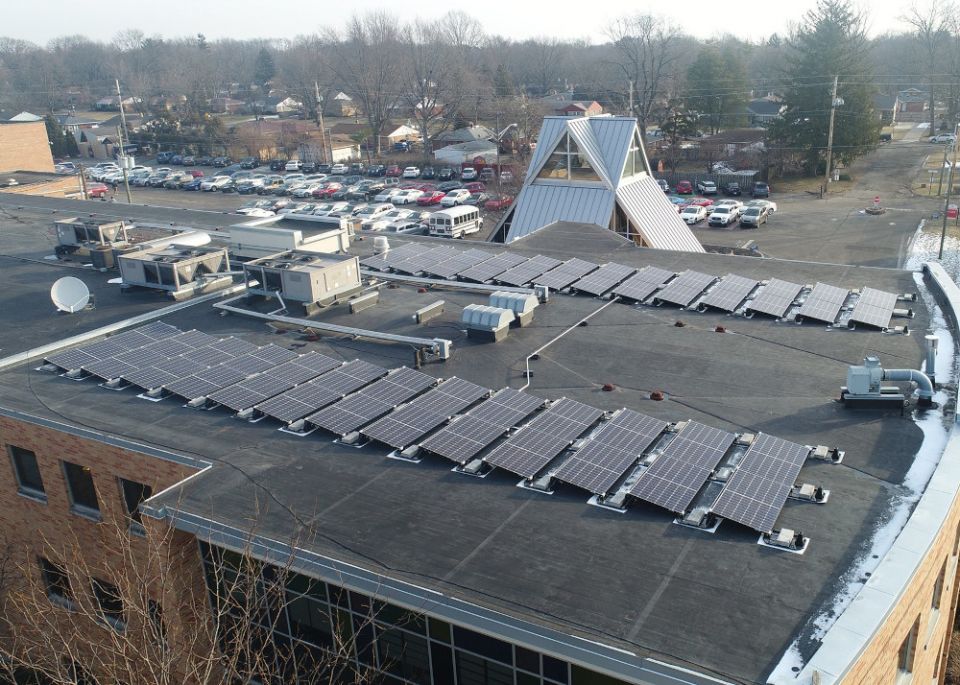 Hoffman said the change to LED lighting and the installation of the solar panel field will reduce St. Meinrad's electrical costs by 30% per year — an annual savings of more than $200,000.

"We're going to pay for this in 12 years or less," he told The Criterion.

In addition, the panels are guaranteed to produce 80% of their initial electricity output for 25 years at least.

The annual utility savings produced by the archabbey’s various conservation and renewable energy initiatives will be put into a fund to support monks’ future efforts to be good stewards of creation.

With its seminary forming men for the priesthood across the country and around the world and its close ties to other religious communities, parishes and Catholic schools, Archabbot Kurt hopes that St. Meinrad Archabbey's energy-saving efforts will influence others to do the same.

"I believe we are giving a good and needed example," he said. "One nice thing about the solar panel field is that it is so obvious. You see it every time you drive by, so it is in a sense an active advertisement in real time of our interest in being good stewards of creation."

"The world's need for environmental sustainability is increasing," he said. "Implementing strategies to reduce our impact on the earth are important for institutions. Our hope is that we can be a source of inspiration for others to take the steps to be good stewards of the land."