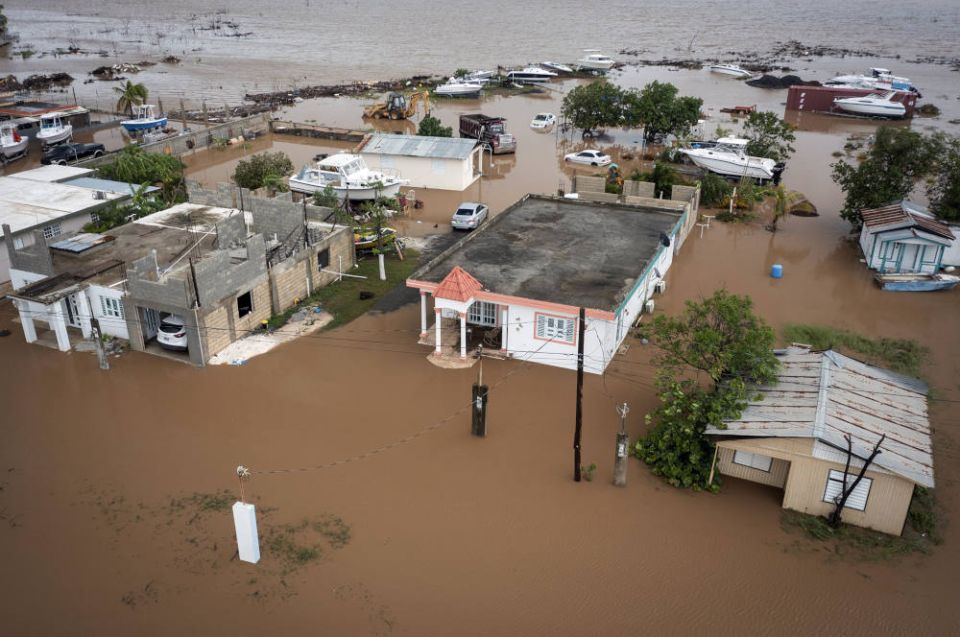 Buildings are flooded on Salinas Beach after the passing of Hurricane Fiona in Salinas, Puerto Rico, Sept. 19, 2022. (AP Photo/Alejandro Granadillo)

In August, Catholic Extension, an aid organization that helps poor Catholic communities, including repairing their churches, sent out 55 requests for bids to construction companies, asking them to estimate the price tag for restoring church buildings damaged by Hurricane Maria in 2017.

They were the first of hundreds of such "requests for proposals" that would follow, a start to an already lagging process of undoing Maria's $100 billion in damage.

Now Catholic Extension has a team evaluating the most recent storm’s impact on Catholic properties in Puerto Rico, where more than 40% of the population lives below the poverty line and 56% identified as Catholic in a 2014 Pew Survey.

"We are just starting to reach out to the priests and communities," said Manuel Martinez, who heads Catholic Extension's rebuilding efforts in the island's six dioceses, in a call from Puerto Rico on Tuesday (Sept. 20). "My suspicion is that there will be three or four heavily affected dioceses," he said, pointing to heavy flooding in the dioceses of Mayagüez, Ponce and Caguas.

The more than 1,000 church buildings damaged by Maria are considered to be eligible for $400 million in reimbursement from the federal government, according to Boland.

Karixia Ortiz Serrano, lead public affairs specialist for the Federal Emergency Management Agency in Puerto Rico, told Religion News Service in an email that FEMA has set aside just over $88 million for repairing Catholic properties damaged in both Hurricane Maria in 2017 and recent earthquakes. Boland said that more than 1,000 church buildings could be eligible for as much as $400 million.

The catch, according to Martinez, is that the repairs need to be paid for upfront, with FEMA reimbursements coming later. "We have to go out and spend money we don't have to have that money be reimbursed," he said. 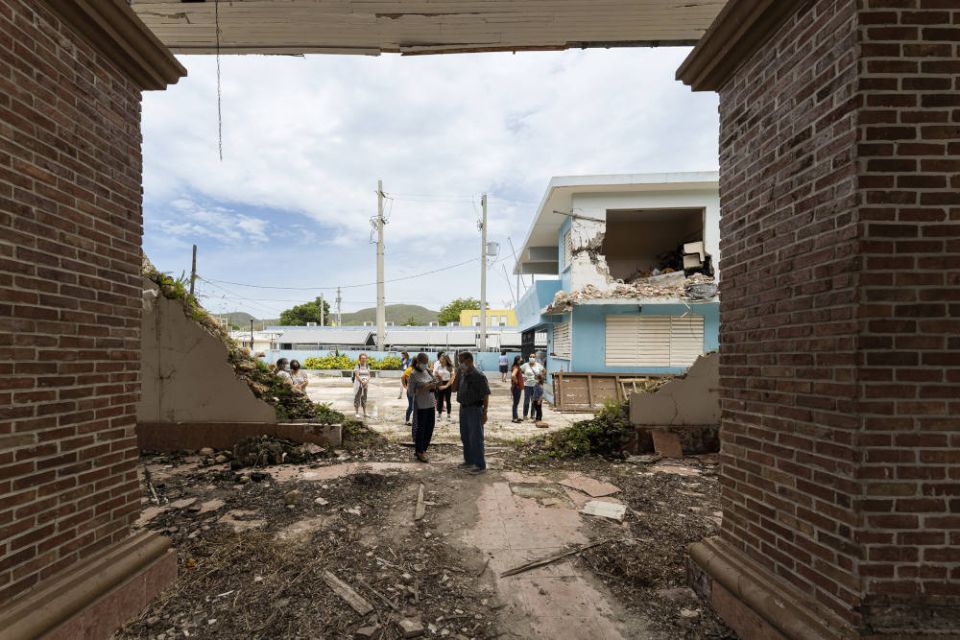 Participants in Catholic Extension's Mission Immersion trip to the dioceses of Puerto Rico visit Immaculate Conception Catholic Church in Guayanilla on June 15, 2022. The church was heavily damaged by an earthquake in January 2020. (RNS photo/Juan Guajardo, courtesy of Catholic Extension)

"Priests are out there trying to serve their communities with leaky roofs, windows that haven't been repaired and replaced, paint in the facilities scraped and deteriorated," said Martinez. "And if you rush out to do repairs, you can put at risk the funds that are supposedly coming to you."

"They keep moving the goal posts, so to speak," said Martinez, referring to FEMA. "When you think you've provided all the documentation you needed to provide, all the proof of ownership, the insurance documentation, somebody down the line revises the project again and requires you to almost go back to square one."

Martinez added that Hurricane Maria was so catastrophic it caused many of the island's insurance companies to go belly up, leaving Catholic groups that paid insurance premiums for years with nothing to show.

When asked about the repair delays, FEMA's Ortiz Serrano pointed to the complex eligibility requirements for private nonprofits, which may receive financial assistance through FEMA's Public Assistance Program if their facilities were damaged by a major disaster. Once FEMA allocates funds, it's up to a Puerto Rican government entity to disburse them. 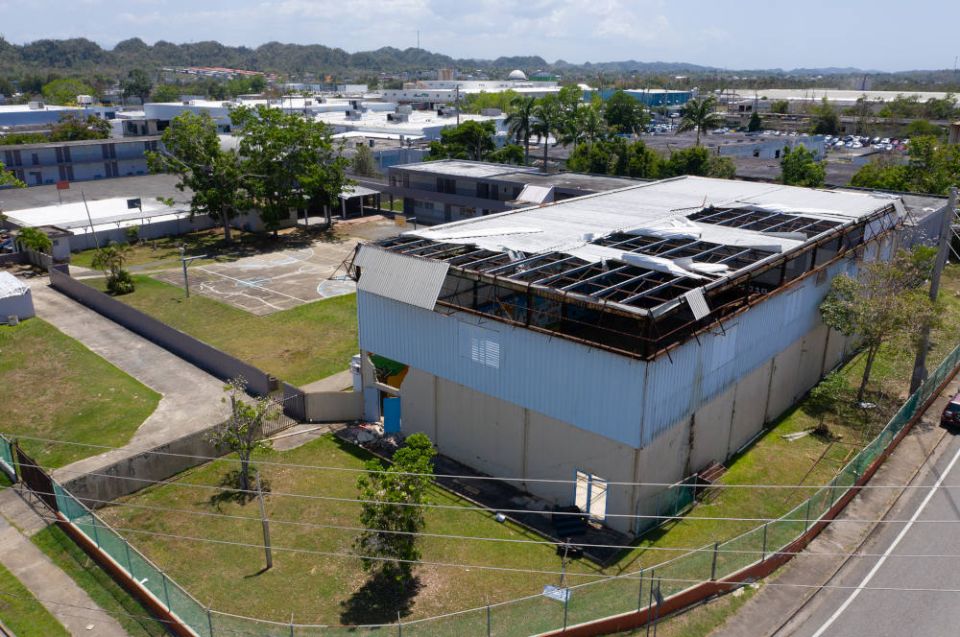 The damaged gymnasium of Colegio Nuestra Señora del Rosario in Vega Baja, Puerto Rico, in 2019. The school was damaged in 2017 by Hurricane Maria. (RNS Photo/courtesy of Catholic Extension.)

Martinez described a chapel in Toa Baja, on the island's north coast, that's been closed for five years due to water damage. At a Catholic school in Vega Baja, a few miles away, the preschool building was destroyed, an entire wing remains unusable and the basketball court was ripped apart.

"Unfortunately, parents who want to put kids in Catholic school, they go there and they see the facility and there's no way you would enroll your kid there," Martinez said. "So they are losing registration, and it's a vicious cycle that's making things worse if these schools don't get help fast."

Many of the damaged properties are historic and require exacting preservation. The Cathedral of Old San Juan, at 500 years old the second oldest church in the Western Hemisphere, suffered substantial damage from Hurricane Maria that has yet to be repaired.

To prevent buildings from being redamaged in future storms, Catholic Extension is working with FEMA to install wind-resistant windows, reseal roofs and replace some building materials with storm-resistant options.

The Rev. Enrique Camacho, director of the Catholic charity Caritas de Puerto Rico, said he took shelter from Hurricane Fiona at his parents' home in Guaynabo, a suburb of the capital, San Juan, as the strong winds and continuous rain battered the island from Saturday (Sept. 17) afternoon until Monday evening. Guaynabo was spared the worst of the hurricane, which hit the central and southern parts of the island most directly.

Camacho told RNS that Catholic infrastructure is not only a matter of saving church property. It's critical in Puerto Rico because the Catholic Church is on the front lines of disaster response, providing impromptu shelter and distributing food and aid. Caritas de Puerto Rico, he noted, plans to purchase 50 generators for those still without power in the wake of Fiona.

"That's where we work the most, helping parishes to be organized. The best way to help the people is with the parishes and the parishioners. They know who is the most in need," he said.

Boland agreed. "The thing that makes the Catholic Church in Puerto Rico unique is that it's located everywhere across the island," he said. "So even in some of those hard-to-reach communities that can often get cut off in moments like this, the Catholic Church is present. They're oftentimes the first organization to show up."

It's precisely the church's commitment to helping those in need that inspires Martinez to remain committed to seeing Catholic buildings repaired. "This is my land, this is my church. I'm Puerto Rican, I live here, and I've been working for church in one way or another for seven years. It's in my heart, it's in my blood, it's in my DNA," he said.

"The church is a main protagonist of the recovery of an island that has been battered by several disasters in the last several years. And the church’s first focus is still, who needs help?"

Read this next: Pope calls for increased assistance to those hit by Hurricane Fiona