Touching a melting glacier brought climate change to my fingertips 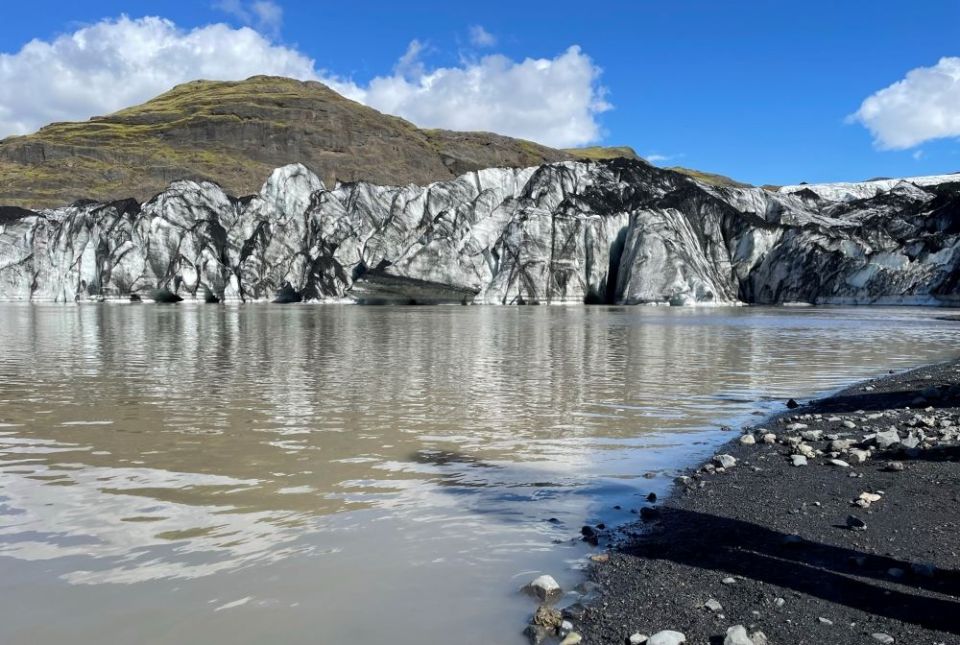 Sólheimajökull Glacier seen during an August trip to Iceland. (Courtesy of Eric Clayton)

It's amazing how quickly glaciers fade into the background during tours of Iceland. At least, that was my experience.

Glaciers do such a good job masquerading as mountains. Plus, they make up more than 10% of the entire country's landmass. These huge, ancient, mysterious piles of ice and ash and stone and time loom out of the ground, taking up an ever-increasing amount of the bus window.

Most of us just shrugged.

"You're sure that's the glacier?" I asked my wife during our big summer Iceland getaway in August. We could never be completely positive we understood the tour guide correctly. "Looks like a mountain with snow at the top."

She consulted the map, nodded. "Actually, it's a volcano capped by a glacier."

I nodded as though I knew what that meant. I could sense my geologically trained father somewhere rolling his eyes.

Literally putting my hands in the wounds of the planet — feeling the tears of a dying glacier chill my very skin — is a different experience altogether. A holy one. A sacramental one.

Snæfellsnes is a peninsula on the western side of Iceland. There can be found the Snæfellsjökull National Park, which houses the famous 800,000-year-old, glacier-capped stratovolcano of the same name we were approaching. The glacier has been there for centuries, inspiring writers like Jules Verne. We weren't its first visitors.

My wife and I and a handful of international tourists spent the better part of a day on a bus headed westward, chewing on the word "Snæfellsnes" as we struggled to pronounce our destination. It didn't necessarily roll off the tongue. Our guide was worried the glacier wouldn't be visible in the low-hanging cloud coverage. But the thing was enormous; we could see it clearly miles and miles away even if its peak remained elusive.

Standing in the shadow of Snæfellsjökull was the goal of that day trip — and it was worthwhile. But there was a lot of beauty to behold, and the glacier was so far away, seemingly hidden in plain sight. It was hard to really appreciate the stakes: Was it melting? Was the volcano in danger of erupting? Or, was it just part of the landscape, ever changing yet seemingly always there, just ahead, in the distance? 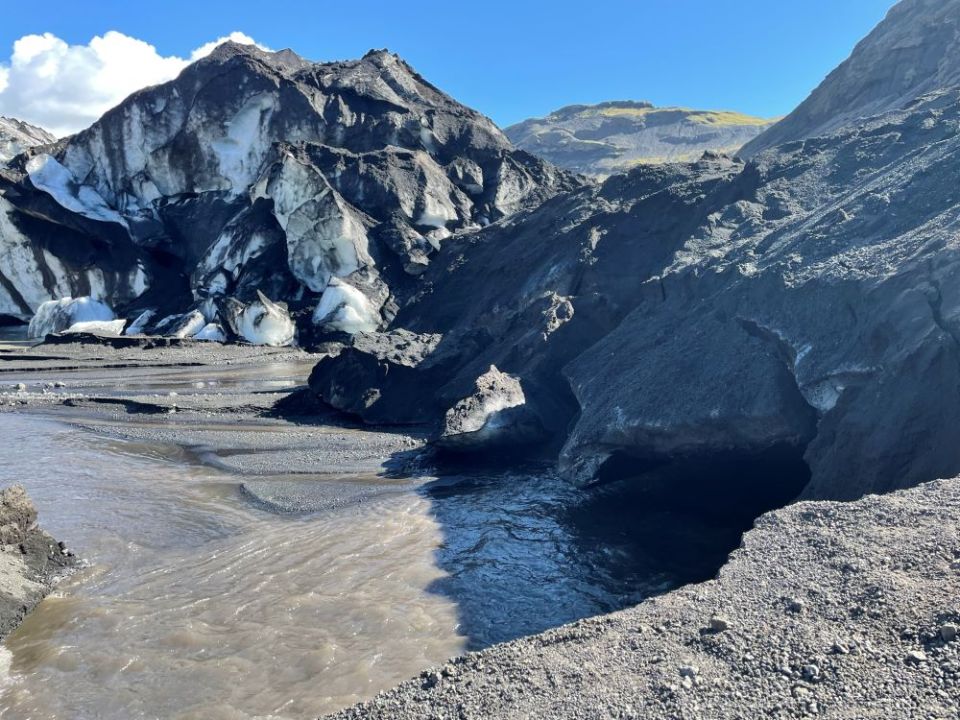 Sólheimajökull Glacier, in Iceland's southern region, is melting, by some estimates losing approximately 2 feet of ice per week and receding the length of an Olympic swimming pool each year. (Courtesy of Eric Clayton)

That's the nature of Iceland: These tremendous, breathtaking works of natural wonders are everywhere. Glaciers and waterfalls and steep rocky cliffs and crashing waves and shorelines littered with polished black stones. What's one more mountain, even if it is a volcano-glacier combo?

That all changed two days later on our next excursion. We didn't even know we were going to see another glacier; the main attraction this go-round was a series of waterfalls. But the bus pulled off into a big parking lot amidst flat, rocky terrain and our guide led us along a path between two towering hillsides.

We had arrived at — and I confess to looking up the spelling after the fact — the Sólheimajökull glacier.

"When I was a young man," the guide intoned, "the glacier came all the way to this parking lot." He gestured to a spot of land not far from where we'd left the bus.

"How old do you think he is?" my wife whispered to me.

I shrugged. "Seems like an important detail to making his point." 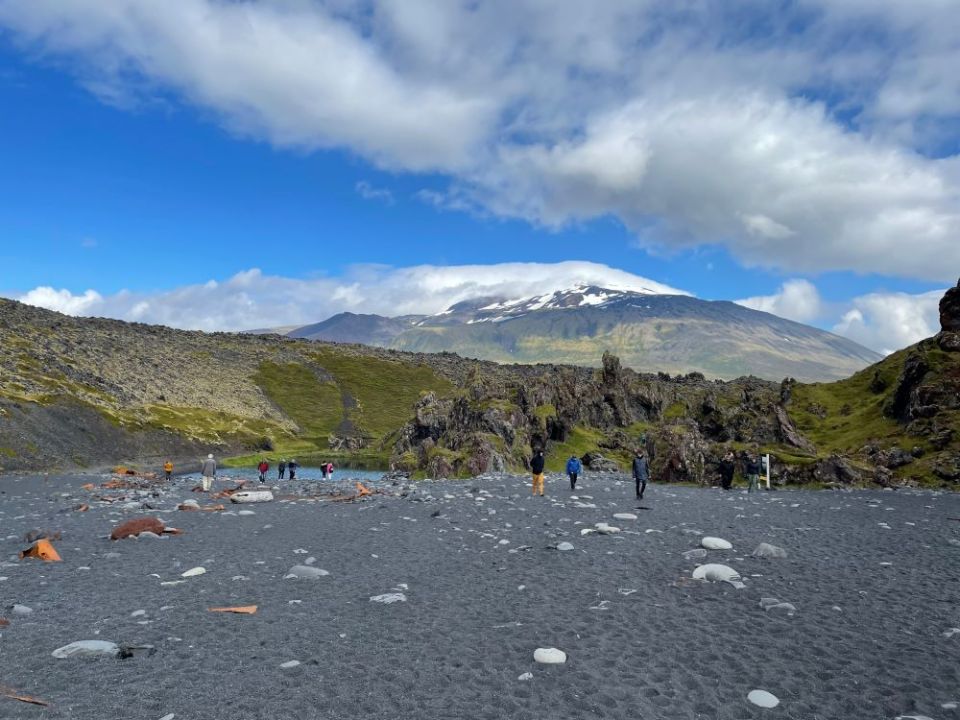 Iceland's Snæfellsjökull stratovolcano, capped by a glacier, is seen in the distance during an August visit to Snæfellsjökull National Park. (Courtesy of Eric Clayton)

We continued picking our way over ash-covered-rock. The whole area — including the glacier itself — was covered in blackened ash and dust, a long-standing reminder of the 2010 eruption of nearby Eyjafjallajökull.

"Just two weeks ago, you could touch the glacier here," our guide said, sadness evident in his tone.

I glanced at my wife. Now we had some hard data to go off; we still had a few dozen feet to walk before reaching Sólheimajökull. Two weeks was not a long time at all, particularly for an unseasonably cool Icelandic summer.

The mood began to change then for my wife and me. We proceeded with both caution and reverence. "Be aware of melting ice," signs read. But we didn't need the signs; we could see with our eyes, feel with our hands. Cracks had appeared along the pathway, evidence of the ice giving way. Streams of water gushed down the sides of the glacier, adding to the ever-growing body of water that sat at Sólheimajökull's base.

There was no mistaking this geological wonder for a mountain; its very self was melting. It was disappearing before our very eyes, turning into water and blackened mush.

"I feel like we're seeing history," my wife murmured on our walk back. We couldn't share in the enthusiasm of the others — so many rushing to take photos, to balance on the ashen ledges or trek across ever-shifting icy surface. All we felt was sorrow.

We weren't standing in the shadow of a mountainous wonder; we were bearing witness to this glacier's inevitable decline. 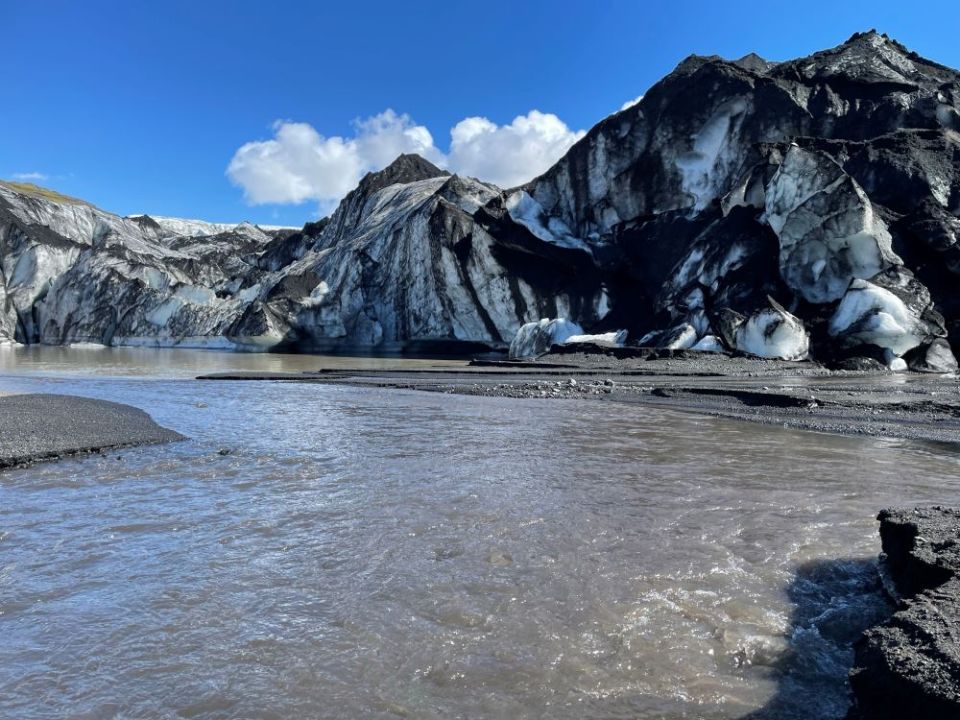 Signs leading up to the Sólheimajökull Glacier in southern Iceland warn visitors to beware of melting ice. (Courtesy of Eric Clayton)

Pope Francis has challenged us to hear the cry of the earth; a variation, "Listen to the Voice of Creation" is the theme of this year's ecumenical Season of Creation. I think for me, for too long, that cry was muffled by data points and statistical trendlines and political punditry.

Sure, I knew the planet was warming; I knew the glaciers were melting; I knew water levels were rising — and I knew all the human suffering that would inevitably follow. I knew something needed to be done. But for too long, that knowing was akin to seeing that glacier-capped volcano in the distance, although it's worth noting that Snæfellsjökull is also melting and projected to disappear as soon as 2050.

Literally putting my hands in the wounds of the planet — feeling the tears of a dying glacier chill my very skin — is a different experience altogether. A holy one. A sacramental one.

The lesson of Iceland is that the ice and fire that destroys also creates and nourishes. As the glacier melts, new natural wonders are revealed, as are new threats to our shared future. It is the way of things. In fact, it is the mystery of our Catholic faith: Death leads to new life, to resurrection.

But our faith also demands that we act on behalf of life. We accept the inevitability of death, we look forward to the resurrection while at the same time promoting the common good here and now, listening and responding to the cry of the earth and the cry of the poor.

Two things can be true at once: We can trust God at work still in creation, knowing that God can and does create wonders even with melting glaciers; and, we can work to keep those glaciers intact, marveling at the wonders they already are.

What we can no longer do is pretend that the problems are far away on the horizon: rising sea levels and deadly weather patterns and more. Rather, we need to thrust our arms into the freezing water of the proverbial melting glacier and let it wake us up to the signs of the present moment.

Eric Clayton is the author of Cannonball Moments: Telling Your Story, Deepening Your Faith and the deputy director of communications at the Jesuit Conference of Canada and the United States.