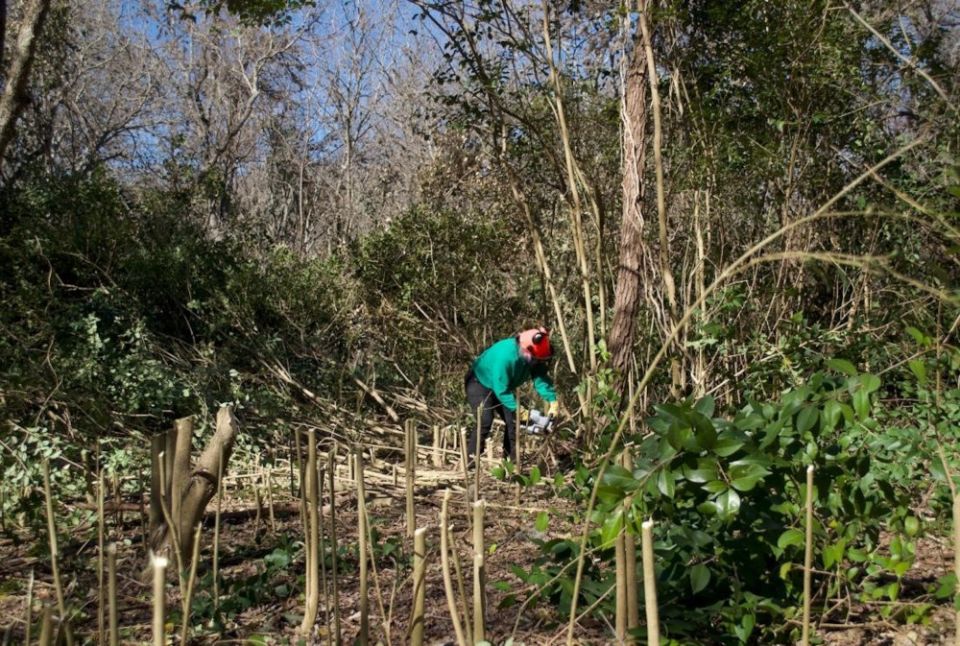 Volunteers help cut down invasive tree species in the Headwaters Sanctuary in San Antonio to restore it to its natural state that will benefit the local wildlife. (Alexandra Applegate)

San Antonio — Behind the University of the Incarnate Word's baseball fields in San Antonio, buzzing chainsaws can be heard every Saturday morning in a 53-acre nature preserve: the Headwaters Sanctuary. Volunteers walk down a dirt path and through dense trees to arrive at the zone they will tackle that day. Some cut down small Ligustrum trees at the base of their trunks; others drag the discarded trees into a large pile. The felled trees are then loaded onto a cart to be driven out of the sanctuary and discarded. Saw, drag, repeat.

After three hours, more than 100 tree stumps dot the land. For the first time in years, sunlight stretches through this area of thinned forest and warms the soil. The sanctuary's only full-time staff, executive director Pamela Ball, scurries between the stumps spraying them with herbicide so the trees can't grow back.

By noon, the field looks completely different than it did that morning — when invasive trees blocked the sunlight — but there is still a lot to do before the sanctuary can be fully restored to a natural state.

Chopping down live trees may seem counterintuitive to restoration, but it helps protect an area's biodiversity. Removing alien species ensures an ecosystem can function properly and safeguards natural resources like soil or water. Preserving the native species in any given area helps cushion it from the effects of climate change and makes it more adaptable.

The Headwaters Sanctuary, owned by a nonprofit run by the Sisters of Charity of the Incarnate Word, is practically overrun with invasive plants — especially Ligustrum trees. The trees are native to South Florida and are harmful to the local Texas bird population. They also starve native plants of sunlight, soil and water.

"Plants are starting to slowly adjust," Ball said. "They can't adjust as rapidly as climate change."

A warming and changing planet is making environments less resilient while facilitating the spread of invasive species. A 2020 study predicted alien species will increase by 36% by 2050.

Some of the Ligustrum trees were planted in the 19th century to beautify the space. However, much of today's invasive population put down roots because nearby residents used them in their landscaping, and the seeds found their way here. Now, the nature preserve has been permanently spared from future development because of the conservation easement it received in 2020. The next step is to spare the sanctuary from its invaders.

Last year, when Texas experienced below-freezing temperatures, the cold slowed regrowth in the Headwaters. The spring foliage popped up nearly two months late, starving the wildlife that migrates to South Texas and depends on the plants for sustenance.

"Our native plants are quite surprisingly resilient" to the weather, said Kelly Lyons, biology professor and invasive species specialist at Trinity University. "The plants that have been here for hundreds of years are pretty well adapted to even these cold snaps."

But native plants can't thrive if invasive species are choking them out.

Headwaters Sanctuary volunteers loyally show up twice a week to continue the nature preserve's restoration work. In the zones they've already sawed through, sunlight shoots through the tree branches and growth can be seen on the forest floor — the first sign that native species can grow again. When they finish the restoration work in 2024 as hoped, "this place is going to be loaded with wildlife," Ball said.

"We have a commitment in the mission of Earth care, not just on the property, but to disseminate the information," Ball said.

The volunteers "are going to understand what it takes to restore this kind of environment, why it's precious and why decisions that are made in one's own backyard have an implication for us and everywhere else," she said.

Catholic sisters have long advocated on the Earth's behalf. The Sisters of Charity of the Incarnate Word's mission has always revolved around health care and education — demonstrated by the hospitals and schools they established in San Antonio. Now, they have transitioned from curing people to curing the planet.

The Headwaters houses the start of the San Antonio River in the Blue Hole spring, known for its vibrant blue water that used to shoot toward the sky like a geyser. Thousands of years ago, before residential development drained much of the water, Indigenous tribes settled along the river. As Spanish explorers surveyed Texas in the 17th century, they settled along the river because of the resources water provides. The city of San Antonio owes its growth to the river. 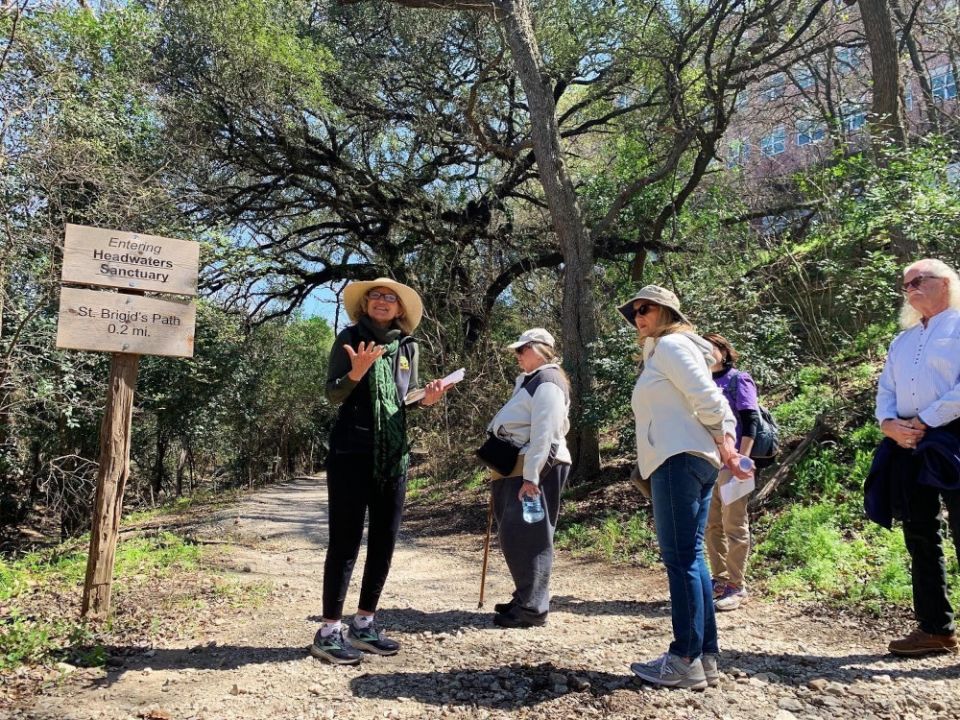 Sylvia Maddox, a former professor with the University of the Incarnate Word, leads an annual prayer walk through San Antonio's only nature sanctuary, Headwaters Sanctuary, to help people reconnect to nature and the divine. (Alexandra Applegate)

Many of the Sisters of Charity of the Incarnate Word relocated to San Antonio from Galveston in the 1860s because a cholera outbreak flowed through the river, sickening San Antonio residents. The sisters opened the first hospital in the area to tend to ill patients.

"The water brought us here and it is healing," said Sr. Yolanda Tarango, a member of the religious order. "As a congregation, one of our most important ministries is to continue that healing process and not just through the hospital or the health system. But also including the healing of nature."

For Sr. Sarah Lennon, who helped secure the conservation easement for the sanctuary and served as a missionary for more than 60 years, caring for the Earth is integral to her ministry.

"If you have no Earth, we have no people," Lennon said.

But for the sisters, restoring the land is also serving San Antonians. Numerous studies have shown that green spaces in urban areas can improve mental health by reducing stress and offering a setting for connecting with other people. Green spaces also reduce pollution and help protect against flooding or droughts.

"The Headwaters draw you to something beyond yourself, away from the rat race of the day," Lennon said. "It's healing for the whole body for people who are tired, weary and living with noise and concrete every day."

Before the pandemic, the sisters hosted environmental film nights and workshops on topics such as composting and soil care to educate locals on caring for the planet. They hope to restart these activities soon.

The sanctuary, tucked behind the university, doesn't have its own dedicated parking lot. They recently received a grant to expand one of its entrances to make it more accessible and easier to find. Bexar County also approved the San Antonio River Authority's 2021 proposal to connect the River Walk to the historical missions in the area as well as to the Blue Hole and the Headwaters Sanctuary. This section of the walk, which will be called Spirit Reach, is expected to take a decade to complete.

But for Tarango and her fellow sisters, restoring the sanctuary is not just about preparing for climate change or improving the quality of life for San Antonians.

"Sustainability is about treating creation with dignity," Tarango said. "It's really nurturing God's creation. The least we can do is care for, heal and nurture God's creation."

"This is a profoundly spiritual endeavor," said Lennon. "Because it is preserving the gift that God has given us." 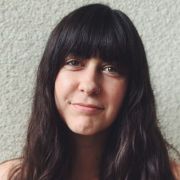 Alexandra Applegate is a multimedia journalist and public radio producer in Los Angeles. She is passionate about reporting on climate change, policy, inequity and people. Her work has appeared in Buzzfeed News, Currently, Laguna Beach Living, The Fullest magazine and more. Alex recently graduated from the University of Southern California with a Master of Science in journalism.