by Joan Chittister
This article appears in the COP24 Poland feature series. View the full series. 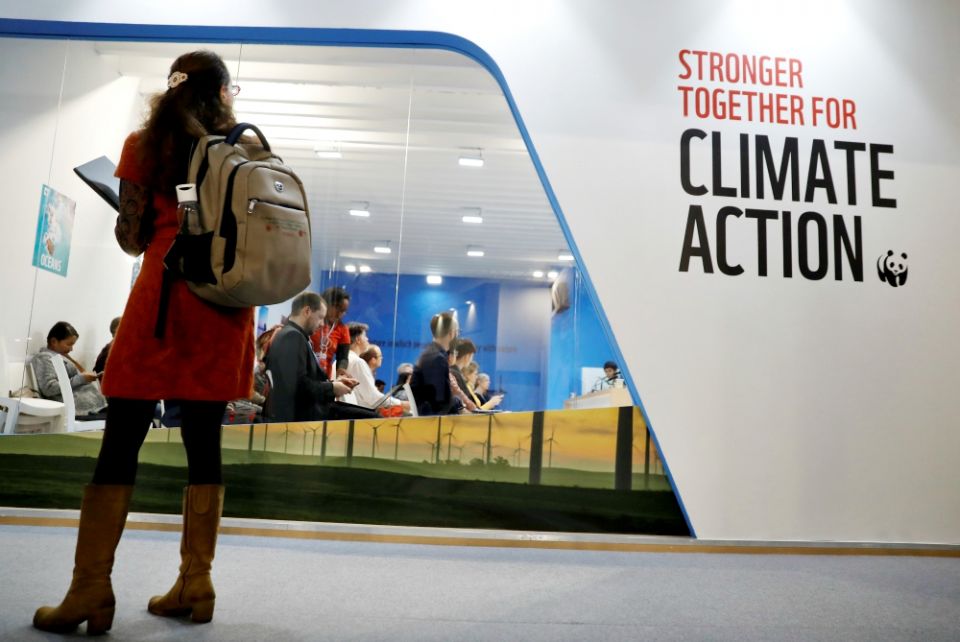 A woman watches an exhibition inside the venue of the U.N. climate change conference, or COP24, Dec. 8 in Katowice, Poland. (CNS/Reuters/Kacper Pempel)

I just came back from the U.N. Conference on Climate Change in Poland. It was a meeting we should all have been able to attend.

Almost 50 years ago, in 1973 during the Arab-Israeli War, OPEC imposed an embargo on oil exports to the U.S. in retaliation for U.S. support of Israel. It awakened the world to the dark side of the bright side of modern economics. All things have an end, even oil, the engine of modern productivity. Now, scientists estimate that at the current extraction rate, there are about 53.3 years of oil left on the planet, at least 80 percent of it in OPEC countries.

Years ago, in other words, the West woke up to a head-on confrontation with what would later be seen as our first serious experience of the finitude of resources. But no one panicked. "Oil shortage?" I heard a man in the airplane seat behind me say. "Oil shortage? There's no oil shortage! And even if there is, they'll just go into a laboratory somewhere and invent something to take its place. Till then, this is nothing but an excuse to raise the price of gas again."

Few Americans believed in the limitation of natural resources then and few believe in the real effect of climate change on daily life now, despite years of scientific data to the contrary. So what if it's real, we figure. We'll just go on, business as usual. Oceans refresh themselves, we argue. More methane emissions come from cows than from humans, we assure ourselves.

The regulation of carbon emissions hurts industry, we decide, and so resist it. Land always dries up from lack of water, but floods and wildfires repair the balance to nature as we go, we insist. But the scientists go on warning us. And so the world as we know it dies from lack of care.

For nearly 25 years, the United Nations climate conferences have been attempting to educate the world to the vulnerability of the natural order and encourage global collaboration on climate change. Each of those 24 assemblies has released more and more data on the forever upward-trending data on the loss of species that make up our biological diversity.

They have certified the poisoning of the oceans and the rising of the tides that will reclaim coastal land everywhere. They have charted the extremes of climate that are beginning to render whole areas of the globe unlivable.

Yet, now, as then, few Americans are genuinely exercised by the subject. In fact, Donald Trump, the president who pledged to "make America great again," can look into a camera and dismiss his own administration's recent climate change alarm with a simple, "I don't believe it." So much for leadership.

But there are three other groups who are vying to be heard on the subject of climate change in the light of scientific data that says that we have as few as 12 years to be able to influence the trends toward ecological disaster. They all met within the past few weeks. The average American needs to understand each of them.

The first is COP24, the most recent in the string of 24 international meetings on climate change. Somewhere between 25,000 to 30,000 people registered for this "Conference of Parties" in Poland. They are political types, educators, activists and corporate planners whose presence is just one sign of their commitment to the implications of sustainability and climate change. They are from every nation around the world.

Most of all, at least half of them, if their backpacks and T-shirts are any indication, are under 50 years old. They are hurrying to save a world where desertification is already well on the way, drinking water is drying up by the day, and fossil fuels are choking oxygen out of the atmosphere.

The second group, a task force called ALEC, the American Legislative Exchange Council, was also in session. This group wasn't in Poland for the U.N. meeting. Instead, it met behind closed doors in a hotel in Washington, D.C. They are state legislators and corporate lobbyists whose commitment is to herding legislation through U.S. Congress that will block climate change programs. This older, more professional group supports the elimination of tax benefits for the manufacturing of electric vehicles and endorses Trump's fossil fuel energy agenda.

Welcome to the modern world. Opposites are in motion, in conflict, on almost every major issue on earth. We live, in other words, at a crossover moment in time.

To walk through the halls at COP24 is to sense the human energy behind the concerns. This younger generation sees its future through the filter of coming destruction. They spend their young lives trying to alert the world to its own demise. They organize groups to take action, to bring pressure to bear on resisters, to usher in a new, more life-giving lifestyle of recycling, sustainability and corporate commitment to a pollution-free world. Their job in a self-satisfied industrial world is the difficult one.

But I have a feeling that COP24 itself also indicates a kind of climate activism that is starkly different from all the COPs before it. There is a new tone to it. This is no longer the kind of COP meeting that preceded this one.

Previous COPs, I remember, were airplane hangars full of exhibits. A good number of them taught basic science. There were tools for science teachers on all levels. There were prototypes of technology meant to measure and convert and reduce energy types. There were samples of products designed to change the way the average person went about life.

There were vendors who encouraged people to abandon Styrofoam cups and plastic straws, and save energy by wearing wool in winter weather rather than turn up the heat in our houses.

Those concerns are still there, of course. But no one here really believes anymore that such personal projects, good as they may be, can really save a society hell-bent on destroying tomorrow by continuing yesterday.

Consequently, perhaps, the presentations have taken on a different tone in another group of people who took part in COP24.

Instead of concentrating on external projects, there is a move now to recognize the impact of internal attitudes on an entire series of very present dangers: fire, flood, the loss of life-sustaining biodiversity, large-scale famine, immigration overflow, poverty and joblessness, for instance.

The third group weighing in on climate change these days is religious leaders, spiritual teachers, more philosophic types who know that nothing much can happen to the world around us until something happens within us that is beyond money and power, that seeks global harmony and world peace.

In our group, the Global Peace Initiative of Women, a Buddhist teacher, a Sufi practitioner, an American evangelical, an American Indian, a Hindu swami, a Vedic scholar and myself, a Catholic nun, addressed interested audiences on spiritual development as the key to human development, the need to understand that we are here to complete the work of creation rather than consume it.

From where I stand, it seems to me that the scientific data won't mean much, then, until we stop again to examine our core values, our sense of what it means to be fully human, our attitudes about what makes for a full life, a happy life, a moral life. Until we each make a connection between how we live on the Earth, how we see our relationship to it as a measure of our morality, it is doubtful that much will happen to save it.

At the end of the day, we simply need to decide what kind of person we want to be on a globe that is crying out in distress. Until then, I doubt that repeating all that scientific data over and over can possibly move us beyond "I don't believe it."

Column | COP24: It's not about resources anymore; it's about moral maturity