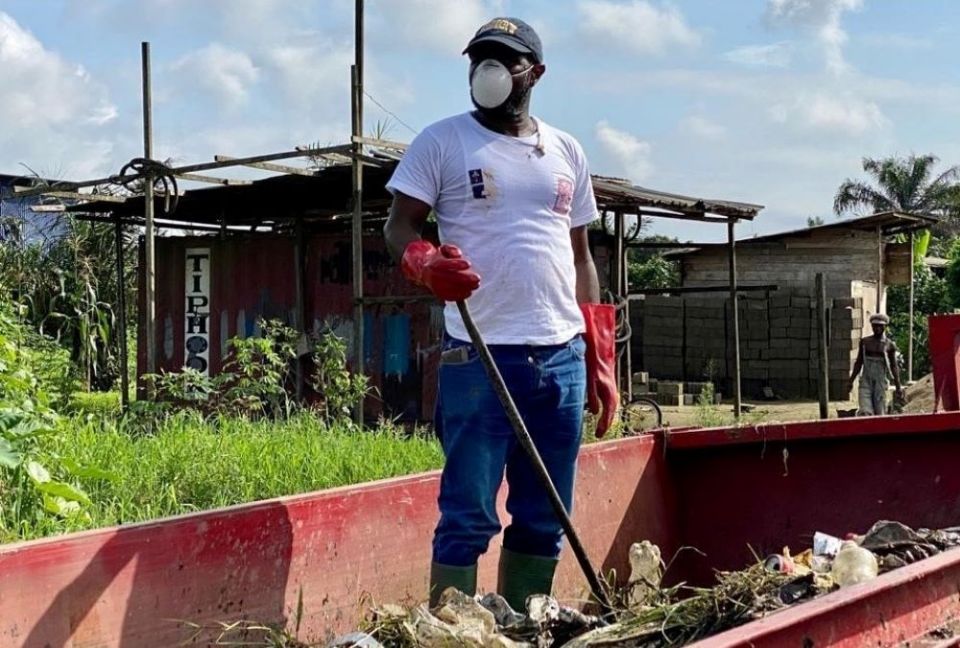 Fr. Innocent Wefon of Cameroon participates in a cleaning exercise with the Catholic Youth Network for Environmental Sustainability Africa, a grassroots lay organization that aims to empower African youth to get involved in working for a better climate. (Courtesy of CYNESA/Allen Ottaro)

NAIROBI, Kenya — When Allen Ottaro grew up in Nakuru on the foothills of the Mau Forest complex about 100 miles west of Kenya's capital, Nairobi, the region experienced sufficient rainfall. Ottaro recalls going to school while it was drizzling and returning home through evening rain.

But after a few years he started noticing subtle changes in rainfall patterns: water shortages compounded by long dry spells — something that was rare. Ottaro and his siblings had to walk more than a mile to fetch water from a Catholic parish, which had a borehole that supplied water to residents in the area at a subsidized fee.

African communities, including Nairobi, are widely viewed as some of the most vulnerable to climate change despite having contributed the least to its causes. Youths' experience living with the adverse effects of environmental degradation is creating a growing network of young Catholics across the continent — and the globe — working to ensure a better future for the planet.

As a young man, Ottaro founded the Catholic Youth Network for Environmental Sustainability Africa, or CYNESA, a grassroots lay organization that aims to empower youth across the African continent to get involved in working for a better climate.

"The main aim of coming up with the network was to bring everybody on board, especially the youth in the church, to battle climate catastrophes," said Ottaro who is also the network's executive director.

Experiencing the effects of climate change irritated Ottaro. As a boy, his lifestyle did not cause the environmental degradation his community faced. He felt that all he could do was to cope with the heartbreaking situation.

But later in life, he connected these environmental issues to the destruction of the Mau Forest, which is also the country's main water source. That spurred him to start environmental conservation plans to battle the problem. He founded CYNESA in 2011 with like-minded friends. 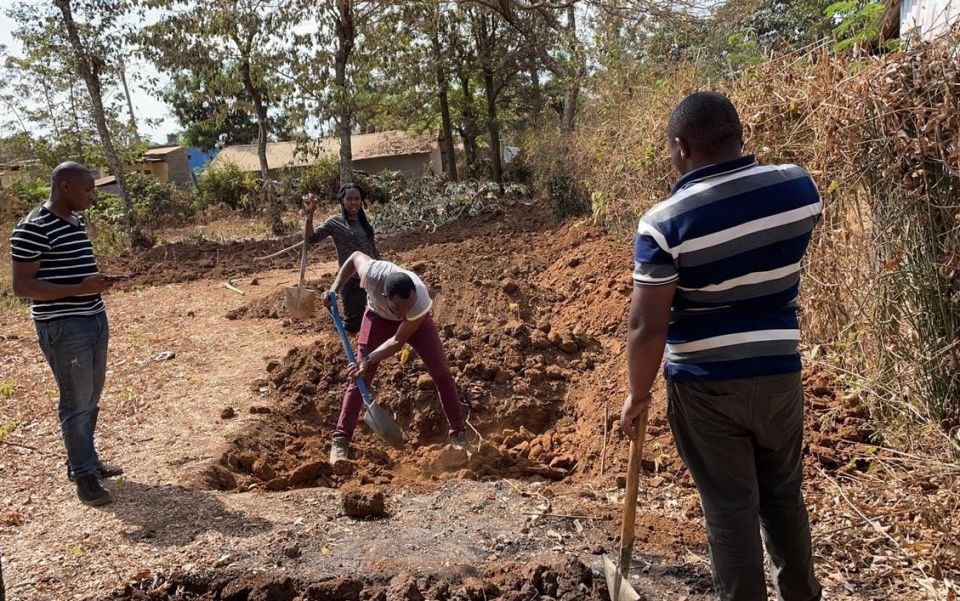 Youth with the Catholic Youth Network for Environmental Sustainability Africa work at a demonstration site in central Kenya. (Courtesy of CYNESA/Allen Ottaro)

"Catholic faith calls on every believer to examine the relationship with God, with each other and with all of creation," Ottaro told EarthBeat, where he serves on the advisory panel. "Pope Francis also reminds us that we cannot adequately love and care for the poor and vulnerable in our communities, without care for our common home that we all share, which is the planet."

"For us, our faith is a faith that does justice and so we have to get involved in building a better world," said Ottaro, who has served on the global membership council for the Laudato Si' Movement since it was founded as the Global Catholic Climate Movement in 2015. He cites an excerpt from Laudato Si': "Young people demand change, they wonder how anyone can claim to be building a better future without thinking of the environmental crisis and the sufferings of the excluded."

CYENSA has expanded its network in Kenya, working with various dioceses, and has spread to African countries including Ghana, Rwanda, Tanzania and Zambia to promote environmental conservation.

"We have a small office in Nairobi which hosts the CYNESA secretariat, a small team of five volunteers who run the day-to-day affairs of the network. Our dream is to have CYNESA wherever there are Catholic youth," Ottaro said.

Ottaro lauded Fr. Innocent Wefon of the Mill Hill Missionaries from Cameroon for supporting the network and starting a CYNESA chapter in Duala when he was sent there four years ago after studying in Kenya. However, he acknowledged the network faces numerous challenges because of the size of the continent, its diverse languages and the difficulties and costs involved in traveling around Africa.

"We hope that we can find more resources for our work to be able to reach more young people in more African nations," Ottaro said. "We have already conducted youth workshops on care for our common home in Uganda, Nigeria, Burundi, Botswana and Cape Verde, which have set the foundation for eventually establishing chapters there."

According to the 2019 United Nations' world population survey, sub-Saharan Africa has more than 226 million youth, which the survey defined as people between ages 15 and 24. That's 20% of the population. This high and rising number is causing a lot of environmental challenges. But many young people in Africa are also forcing change through environmental conservation activities to save the planet.

According to a survey by the U.N. Environment Programme, or UNEP, each year approximately 12 million hectares (30 acres) of forest are destroyed globally due to increasing population and the scramble for natural resources. The survey also noted that deforestation is responsible for more than 25% of global greenhouse gasses.

Speaking in Nairobi during the recognition of environmental conservation youth heroes in 2019, Garrette Clark, sustainable lifestyles program officer at UNEP, said that youth are the right people to be involved in conservation due to their numbers and their remaining years of life on Earth.

"Involving the young people in matters pertaining to conservation could help a great deal to curb the perils of climate change," Philip Osano, center director of Stockholm Environment Institute, said in a press briefing Feb. 26. 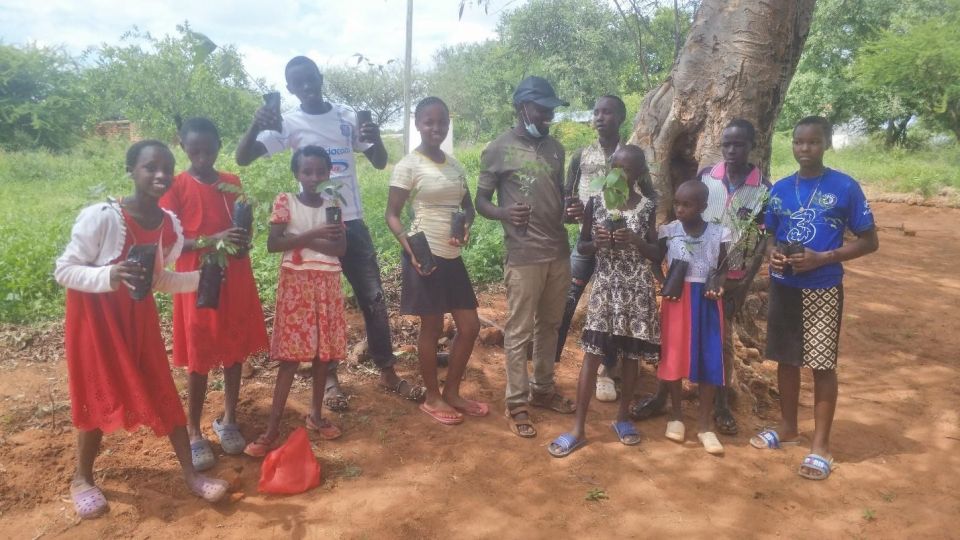 Youth with the Catholic Youth Network for Environmental Sustainability Africa work at a demonstration site in central Kenya. (Courtesy of CYNESA/Allen Ottaro)

Speaking during the 2022 Youth Environment Assembly at the World Agroforestry Centre in Nairobi, Osano urged environmentalists to give youth more opportunities to contribute to the sustainability of nature and protection of future generations. Ottaro strives to do just that.

In 2019, CYNESA organized an international conference marking the fourth anniversary of Laudato Si' in collaboration with World Wildlife Fund Africa, the Vatican's Dicastery for Promoting Integral Human Development and UNEP.

CYNESA has been involved in many climate gatherings the U.N. has organized in Africa, particularly by the U.N. Environment Assembly. Ottaro has attended events such as a working group meeting of the Convention on Biological Diversity, held at the U.N. complex in Nairobi in 2019 as part of the preparations for COP15. Ottaro and his colleagues hope to attend the gathering, scheduled for May 9-20 in Ivory Coast, though he says attendance will depend upon funding support.

African Catholic youth have also traveled to take part in global climate conversations. They were represented at the COP26 U.N. climate summit in Glasgow, Scotland, with six delegates: two from CYNESA Rwanda, one from CYNESA Ghana, one from CYNESA Kenya and two from the CYNESA secretariat.

The network is now preparing to attend COP27, which will be held in Sharm El-sheikh, Egypt, later this year.

The group is "keen on following progress on the topics related to climate finance, climate adaptation and the issue of loss and damage," Ottaro said. "For us at CYNESA, we will continue to enhance our formation programs which constitute both environmental education and creating awareness about the ecological crises we are facing."

Shadrack Omuka is a freelance journalist and a photographer based in Nairobi, Kenya. He specializes in science, culture, human rights, environment, business, climate change and technology.