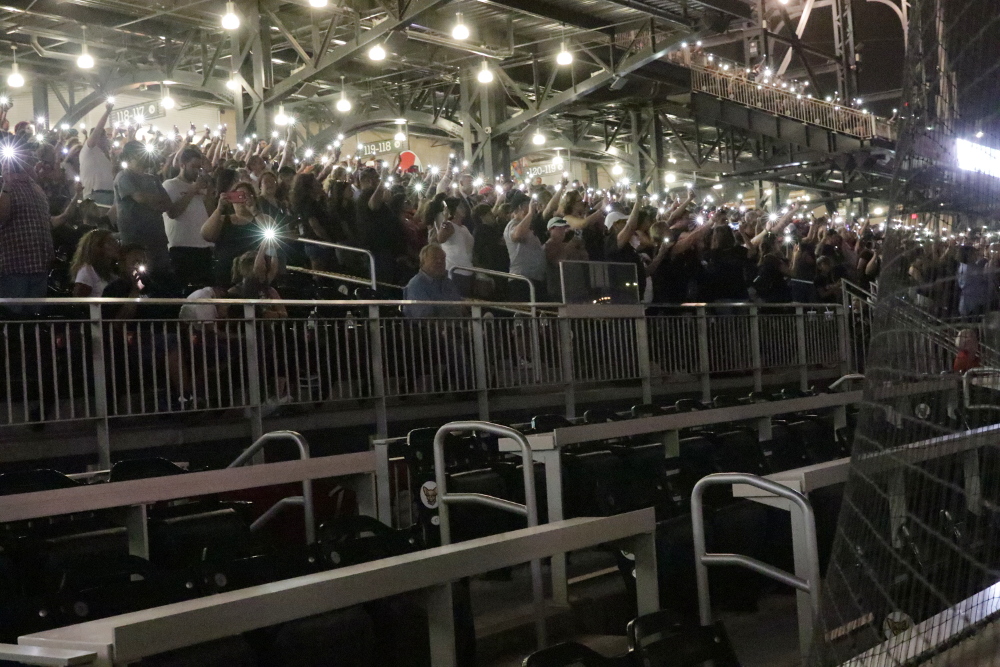 Participants hold up flashlights during a Aug. 14 memorial held at Southwest University Park for the 22 victims of the shooting in El Paso. (Courtesy of City of El Paso)

In the less than two weeks since 22 people were killed by a white nationalist from outside their community, El Pasoans have gathered at an outdoor interfaith prayer vigil, erected a makeshift memorial that continues to grow, written soulful ballads and poetry, created unifying murals and artwork, and recently joined a communitywide memorial hosted by the city. Interwoven throughout is a testament to the solidarity and strength of this community.

On Aug. 14, thousands ventured into the 100-degree heat at Southwest University Park baseball stadium to hear state and local officials — from both Texas and Mexico — honor the region and denounce hate. Hundreds more watched simulcasts at three other city locations and an unknown number viewed the broadcast from television screens and Facebook streaming.

"El Paso, you have inspired us," Texas Gov. Greg Abbott told the crowd. "We have watched in awe at the outpouring of compassion of this community."

A Republican appearing in a mostly Democratic city, Abbott received warm, lengthy applause from the audience, particularly when he reported the creation of a state task force to combat domestic terrorism and called out the evils of hatred and racism.

For a city in which more than 80% of the population is Hispanic and many are either first-generation immigrants or have family members who are, Abbott's message appeared to be a salve against the anti-Hispanic, anti-immigrant rhetoric spread by some politicians.

"We are the largest binational, bilingual, bicultural area in the world," El Paso Mayor Dee Margo said. "It was important for us to come together to grieve, to comfort and love one another as one binational region. We were a region 100 years before the U.S. was founded. And we have lived in unison and harmony for 350 years. We mourn as a single community."

That mourning has included an "outpouring of love" — a phrase Margo, his staff, and others have used to describe El Paso's response to the tragedy.

Laura Cruz-Acosta, strategic communications director for the city, said that when El Paso put out a call for volunteers for the memorial, people responded almost instantaneously. "We had to turn away people, there was such an outpouring of love. Everybody wanted to help."

That "outpouring" is grounded in a culture that values family, faith, and living out the Gospel.

"The sense of family in El Paso is literal and figurative in many ways," Cruz-Acosta said. Like most El Paso natives, she has family on both sides of the border. And, like the majority, she was raised Catholic. Involved in various ministries at St. Matthew's Parish, Cruz-Acosta is aware that even those who don't practice their religion have still grown up respecting faith and family.

Native Valerie Rodriguez, one of the volunteers, agreed. A faith ingrained in her and a culture that "values family and believes we are all family," is what she said defines El Paso. It's what taught her "to treat others as you would want to be treated. You never know who that person is who needs help."

That kind of "faithfulness of trying to live out the gospel" has impressed Sr. Andrea Koverman, a Sister of Charity of Cincinnati, who has lived in El Paso for the past two years. "You hear Scripture quotes constantly, even at the city's memorial, which I thought was going to be a secular event. We had the bishop, a rabbi, and a Baptist minister offering prayers, and even the mayor quoting Scripture." 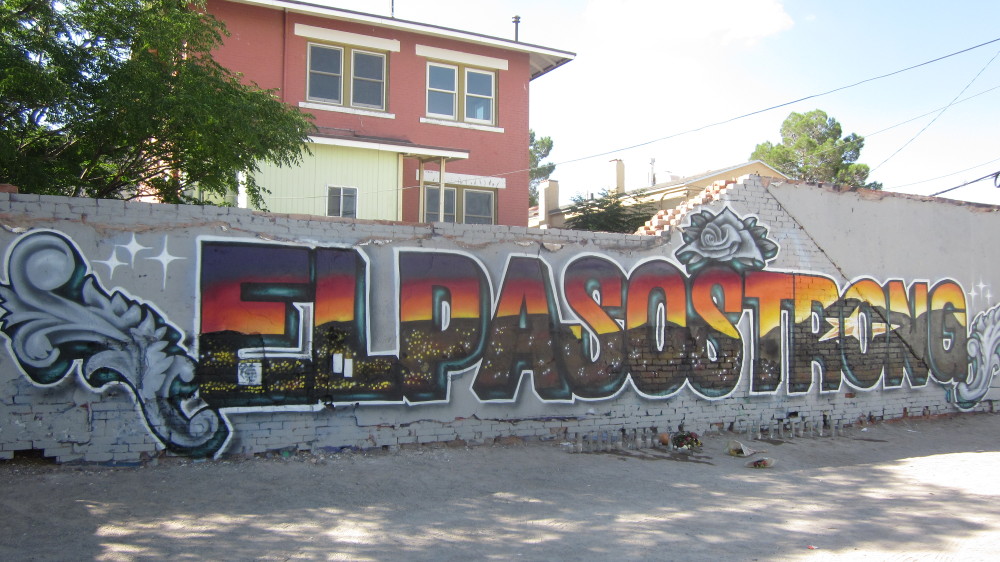 When the "El Paso Strong" slogan first surfaced, Koverman was concerned about its message. But as she watched the community's strength materialize in unifying and loving ways, she realized, "it's really been the opposite of retribution. It's more about we are going to be strong in that we're not going to become hateful." El Paso used this tragedy as "an opportunity to be an example to the rest of the world of how you respond to hate with love."

Cruz-Acosta hopes that people watching El Paso will "come away with how we are a family who have been pushed into a very painful situation, and we come together as a family. And I pray that we serve as a model of what is possible."

That model is exemplified in the floral arrangements at the makeshift memorial honoring "family solidarity" to the hundreds of strangers planning to attend the funeral of Margie Reckard, whose husband, her sole survivor, had worried he would be the only one in attendance. When the community learned of the victim's nonexistent family, they committed to taking on the role. So many want to go, the funeral will have to take place at a larger venue.

"The generosity and compassion of the community is just astounding," agreed Columban Fr. Robert Mosher, who already considers El Paso "a model for the rest of the country." Part of his eight-year mission in El Paso has been to provide a "border awareness experience" to visitors that allows direct exposure to migrants and human rights advocate on both sides of the U.S.-Mexico border.

"I've seen over the years as we've reached out to waves of migrants that come through El Paso, how there is a tremendous spring of solidarity to draw upon in this community," he said. "The effort to get volunteers and donations to help us receive migrating people with dignity is not especially difficult here. What El Paso is dealing with now in terms of migrants, solar energy, and water consumption is what most communities will be dealing with in coming years. The response is something to emulate." 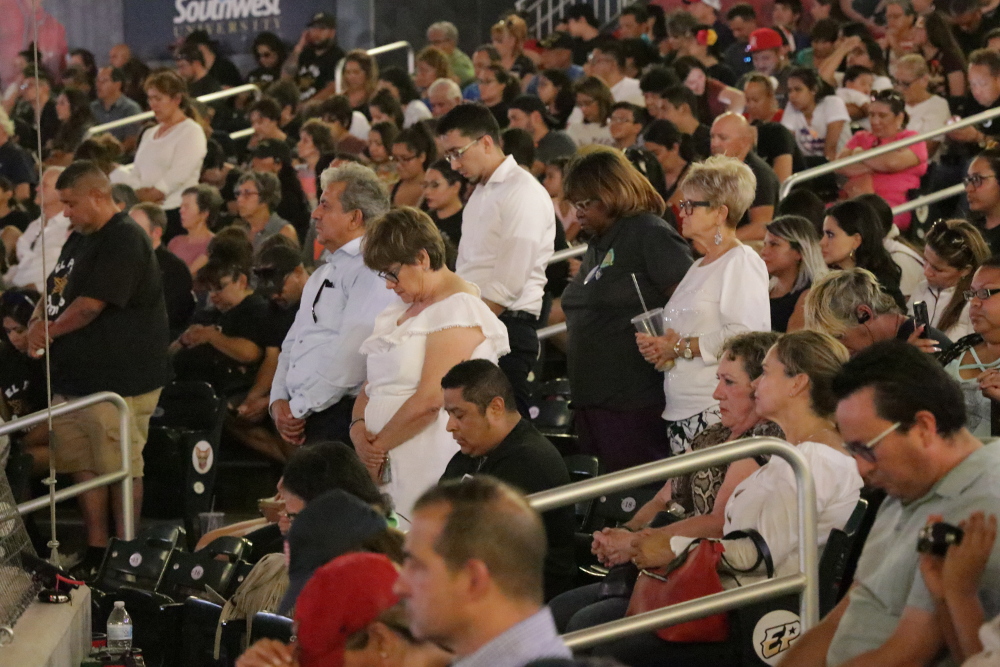 Participants bow their heads in prayer at an Aug. 14 memorial held at Southwest University Park in El Paso. (Courtesy of City of El Paso)

"We are extraordinary. I've always thought that El Paso is an unknown jewel. Well, the world just got a view of our light."

Welcoming strangers, not just migrants, but people of different cultures and races, might be easier in El Paso because, "most families here don't have to look back very far in their history to connect with those who are migrating. Most of their grandparents and parents had to suffer the same racist rejections."

"I am very proud of the way El Paso rejected President [Donald] Trump's [Aug. 7] visit in saying there is a connection between the violence of what occurred and the statements of leaders like Trump. Even the language in the killer's manifesto was similar to words Trump used," Mosher noted.

Ordinarily, El Paso is an "amazing, welcoming community," said Maryknoll Sr. Lil Mattingly, who has served alongside El Paso volunteers in a migrant hospitality ministry for more than three years. After attending all the community gatherings since the shooting, she said, "This experience has been over the top for me in giving us hope that a peaceful world is possible. El Paso has shown it's all about love, not hate."

And there's one handprinted message at the makeshift memorial addressed to the killer that she says she'll never forget. It ends with, "we will love you into eternity."

Anglo strangers who came to El Paso during the tragedy have found a warm welcome. Janice Marut, with her team from the Lutheran Church Missouri Synod Disaster Response, brought therapy dogs to help heal and comfort grieving hearts. In return, they received gifts from the community. When eating with her team at a local Mexican restaurant, the manager came over and paid their bill.

"We are extraordinary," Margo said. "I've always thought that El Paso is an unknown jewel. Well, the world just got a view of our light."