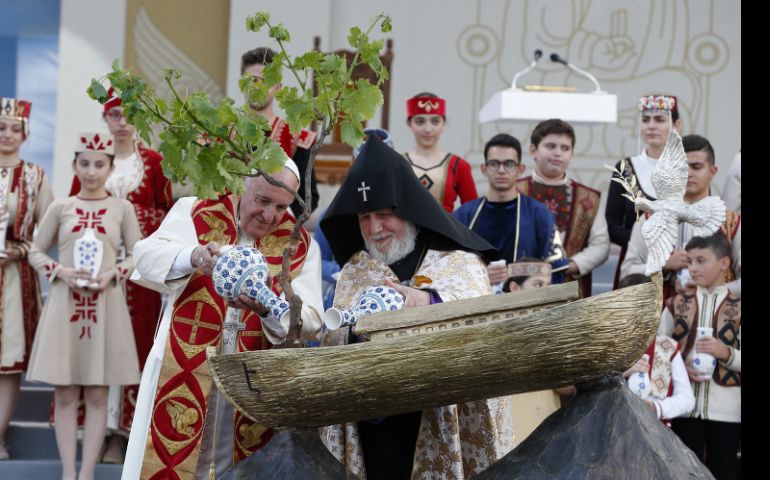 Pope Francis and Catholicos Karekin II, patriarch of the Armenian Apostolic Church, pour water on a tree in a model of Noah's Ark during an ecumenical meeting and prayer for peace in Republic Square in Yerevan, Armenia, June 25. (CNS photo/Paul Haring)
This article appears in the Francis in Armenia feature series. View the full series.

GYUMRI and YEREVAN, ARMENIA — In a day filled with potent ecumenical and political messages, Pope Francis Saturday called on Christians to "abandon rigid opinions" in the search for unity among their different communions and demanded the wider world not forget the lessons of the Ottoman-era killings of some 1.5 million Armenians.

The pontiff began the second day of his Friday-Sunday visit to this country with an image-rich trip to the Armenian genocide memorial in Yerevan, the capital, alongside Catholicos Karekin II, the head of the Oriental Orthodox Armenian Apostolic church.

Francis and Karekin laid a wreath before an eternal flame at the center of the memorial complex, an evocative structure of 12 several-story tall slabs arranged in a circle, before leading a solemn and haunting joint ecumenical prayer together.

"Here I pray with pain in my heart that there may never again be tragedies like this, so that humanity may never forget and may know that good wins over evil," the pope wrote in the memorial's guestbook.

"May God guard the memory of the Armenian people," he added, continuing with words that may be taken as quite political: "Memory should not be watered-down or forgotten. Memory is the wellspring of peace and of the future."

The pope was referring to past public questioning about whether to refer to the killings, which began in 1915 under the rule of the Ottoman Empire, as a genocide. Turkey, the successor state to the empire and Armenia's western neighbor, claims that the term does not accurately describe the killings.

Francis ended the day with an evening ecumenical meeting and prayer for peace with Karekin and members of his community, which counts some 93 percent of Armenia's population of three million as members.

Speaking in Yerevan's Republic Square, a central square named for Lenin before Armenia's independence from the Soviet Union in 1991, the pontiff issued a clarion call for Christians of separated churches to let go of old grievances and settled traditions in favor of finding unity together.

Read all of NCR's reporting from Armenia.

"Following Christ’s example, we are called to find the courage needed to abandon rigid opinions and personal interests in the name of the love that bends low and bestows itself, in the name of the humble love that is the blessed oil of the Christian life, the precious spiritual balm that heals, strengthens and sanctifies," said the pope.

Quoting the 12th century Armenian St. Nerses Shnorhali, who asked separated Christian communities to "make up for our shortcomings in harmony and charity," the pontiff said the saint suggested "a particular gentleness of love capable of softening the hardness of the heart of Christians, for they too are often concerned only with themselves and their own advantage."

"Humble and generous love, not the calculation of benefits, attracts the mercy of the Father, the blessing of Christ and the outpouring of the Holy Spirit," said Francis.

"By praying and 'loving one another deeply from the heart,' in humility and openness of spirit, we prepare ourselves to receive God’s gift of unity," he continued. "Let us pursue our journey with determination; indeed, let us run towards our full communion!"

The Armenian Apostolic church, which traces its founding to the apostles Bartholomew and Thaddeus, is one of six churches that form Oriental Orthodoxy. Those churches, which have about 84 million members together, recognize only the first three ecumenical councils, breaking off from the other Christian churches in the fifth century.

Shnorhali, a predecessor of Karekin as the leader of the church, attempted to reunite Oriental and Eastern Orthodox communities and is renowned for his writings as a theologian and poet.

The ecumenical aspect of Francis' trip to Armenia has been at center throughout each of the pope's visits here, with deep symbolism evoked especially during the earlier visit Saturday to the genocide memorial.

During their joint prayer there, Francis and Karekin spoke together using Italian and Armenian, respectively. The two stood nearly shoulder-to-shoulder in front of the eternal flame, laying flowers on the ground together, before leading those present in the Our Father prayer in both languages.

After the prayer, a group of men played a deeply mournful tune with duduks, ancient double-reed woodwind flutes that originate from Armenia. As the musicians' cheeks puffed in effort, Francis stood near Karekin and looked near tears at the significance of the moment.

At the ecumenical peace prayer later in the evening, Karekin focused his remarks on an ongoing violent conflict taking place between Armenian and its eastern neighbor Azerbaijan.

The countries have been fighting over the region of Nagorno-Karabakh, an area inside Azerbaijan populated mostly by ethnic Armenians. Despite an official ceasefire signed in 1994, skirmishes have continued, with heavy fighting taking place just this April that left dozens of soldiers on both sides and several civilians killed or missing.

Karekin meditated on the "unspeakable human suffering" taking place in many parts of the world, saying people "become the victims of weapons of death and brutal violence, or they choose the path of refugees, overcoming inexplicable difficulties in order to find a haven of safety."

"Today as well our nation lives under the difficult situation of an undeclared war," he said, adding later that "in such situations, the mission of the Christian churches and religious leaders cannot only be confined to helping the victims, consoling them, and giving pastoral care."

"More practical steps must be taken on the road to searching for peace by consolidating our efforts in preventing evil, by fostering the spirit of love, solidarity and cooperation in the societies through ecumenical and interfaith dialogue, according to God’s command, 'Blessed are the peacemakers, for they will be called children of God,'" said Karekin.

Between his visit to the memorial in the morning and the ecumenical peace prayer in the evening, Francis traveled back and forth about 75 miles north from Yerevan to Gyumri, Armenia's second-largest city.

He celebrated a public Mass there for the country's small Catholic community in the city's main square, suggesting in his homily "three stable foundations" upon which Armenians can "tirelessly build and rebuild the Christian life:" Memory, faith, and merciful love.

The pope warned against a temptation to reduce faith to "something from the past" as if it were "something important but belonging to another age, as if the faith were a beautiful illuminated book to be kept in a museum."

"On this rock, the rock of the love we receive from God and offer to our neighbor, the life of a disciple of Jesus is based," said Francis. "In the exercise of charity, the Church’s face is rejuvenated and made beautiful."

"Concrete love is the Christian’s calling card," he continued. "Any other way of presenting ourselves could be misleading and even unhelpful, for it is by our love for one another that everyone will know that we are his disciples."

In another symbolic moment at the end of the Mass, Francis invited Karekin to ride together in the popemobile. The two leaders drove through the crowd in Gyumri offering blessings side-by-side.

Before heading back to Yerevan in the afternoon the leaders also visited the Armenian Apostolic and Catholic cathedrals in Gyurmi.

A priest at the 19th-century Armenian Apostolic Cathedral of the Holy Mother of God, known locally as Yot Verk, described how during Armenia's inclusion in the Soviet bloc the church was used as a storehouse for food supplies so it would not be destroyed.

He described Francis' visit as "very significant" because of the long separation between the Oriental Orthodox and Catholic communities and said that the pope is acting as a "strong unifier" for Christians.

Inside the apostolic cathedral, Francis and Karekin prayed before an icon of Mary holding Jesus' crucified body over her legs, with his seven wounds from his death clearly evident. The Orthodox priest claimed that the icon had a provenance dating back to the first century.

Francis is to continue his visit to Armenia Sunday by participating in an Armenian Orthodox liturgy and visiting one of the community's most historic monasteries before heading back to Rome that evening.

Francis and Armenian Orthodox patriarch say churches are one in prayer, action