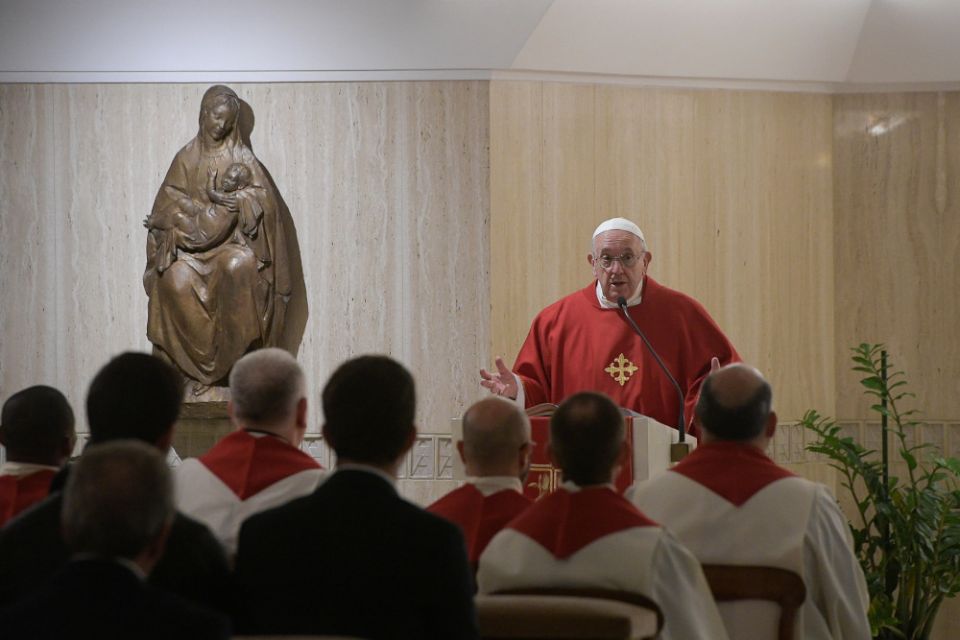 Pope Francis gives the homily as he celebrates morning Mass in the chapel of his residence, the Domus Sanctae Marthae, at the Vatican Nov. 12, 2019. In his homily, the pope said the devil is jealous and tries everything he can to destroy humanity. (CNS/Vatican Media)

Vatican City — The devil is real and is so jealous of Jesus and the salvation Jesus offers that he tries everything he can to divide people and make them attack each other, Pope Francis said.

Celebrating Mass in the chapel of his residence Nov. 12, the pope preached about the day's first reading from the Book of Wisdom, which says: "God formed us to be imperishable; the image of his own nature he made us. But by the envy of the devil, death entered the world."

"Some people say, 'But, Father, the devil doesn't exist,'" the pope told the small congregation in the chapel of the Domus Sanctae Marthae. "But the word of God is clear."

The devil's envy, which the Book of Wisdom cites, is the root of all his efforts to get people to hate and kill one another. But his first steps, the pope said, are to sow "jealously, envy and competition" instead of allow people to enjoy brotherhood and peace.

Some people will say, "'But, Father, I don't destroy anyone.' No? And your gossiping? When you speak ill of another? You destroy that person," the pope said.

Someone else might say, "But, Father, I've been baptized. I'm a practicing Catholic, how's it possible that I could become an assassin?"

The answer to that is that "we have war inside of us," the pope said.

Pointing to the beginning of Genesis, he noted that "Cain and Abel were brothers, but out of jealously, envy, one destroyed the other." And even today, he said, just turn on the TV news and you see wars, destruction and people dying either because of hatred or because others are too selfish to help.

"Behind all this, there is someone who moves us to do these things. It's what we call temptation," he said. "Someone is touching your heart to make you follow the wrong path, someone who sows destruction in our hearts, who sows hatred."

Francis said he cannot help wondering why countries spend so much money on weapons and waging war when that money can be used to feed children at risk of dying of hunger or to bring clean water, education and health care to everyone.

What is happening in the world, he said, happens also "in my soul and in yours" because of the "devil's seeds of envy" sown abundantly.

Francis asked the people at Mass with him to pray for an increased faith in Jesus, who became human to battle and to defeat the devil, and for the strength "to not join the game of this great envier, the great liar, the sower of hate."