by Joshua J. McElwee
This article appears in the Francis in the Baltics feature series. View the full series. 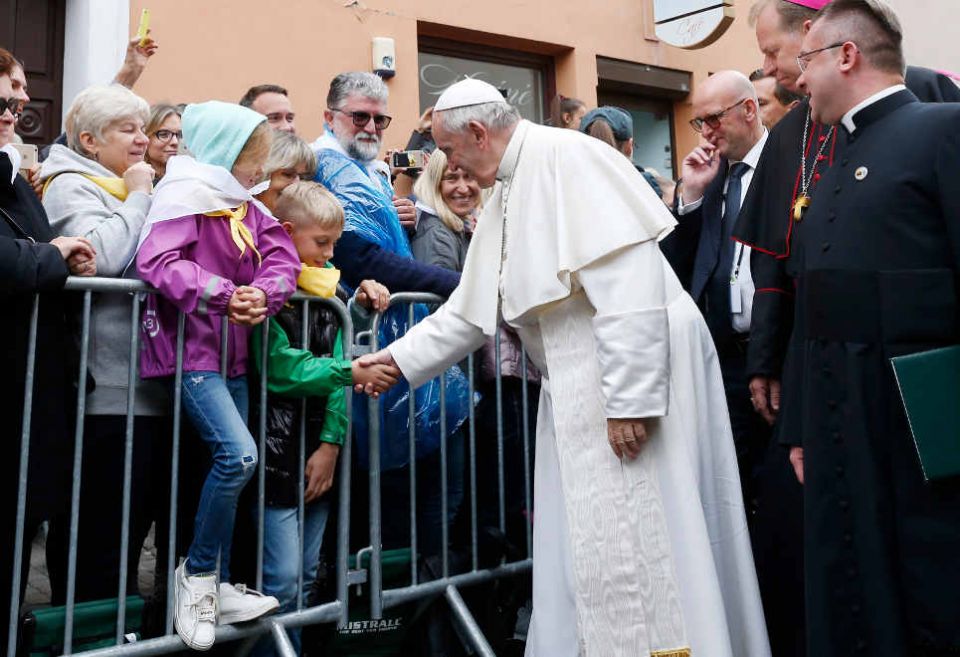 Pope Francis greets a youth in the crowd as he arrives to visit the Shrine of Mary, Mother of God, in Vilnius, Lithuania, Sept. 22. (CNS photo/Paul Haring)

Vilnius, Lithuania — Pope Francis began his four-day visit to the three Baltic States by praising Lithuania's history of accepting people of various backgrounds and ethnicities, calling on the country to "build bridges not walls and prefer mercy, not judgment."

In a speech to Lithuania's political leaders shortly after arriving from Rome Sept. 22, the pontiff said that even through the Nazi occupation of the 1940s and following decades of Soviet rule, the country cultivated an ethic of hospitality that allowed it to "not succumb as a nation."

"If we look at the world scene in our time, more and more voices are sowing division and confrontation ... and proclaiming that the only way possible to guarantee security and the continued existence of a culture is to try to eliminate, cancel or expel others," said the pope.

"You have suffered 'in the flesh' those efforts to impose a single model that would annul differences under the pretense of believing that the privileges of a few are more important than the dignity of others or the common good," Francis continued.

"All conflicts presently emerging will find lasting solutions only if those solutions are grounded in the concrete recognition of [the dignity of] persons, especially the most vulnerable," he said.

Francis is visiting Lithuania, Latvia, and Estonia Sept. 22-25. He is only the second pope to visit the three countries, following John Paul II, who visited in 1993 shortly after the fall of the Soviet Union.

Each of the countries, located as a bloc on the Baltic Sea immediately northeast of Poland and west of Russia, is a former part of the Soviet Union and now a member of both the European Union and the international North Atlantic Treaty Organization.

Francis spoke about Lithuania's history of integration in a speech at the country's presidential palace, after meeting privately with President Dalia Grybauskaite.

The pope repeated the point during a later visit in the afternoon to the Chapel of the Gate of Dawn, a small church above one of Vilnius' historic city gates that contains a 17th century painting of Mary thought to have protected the city from various invasions. 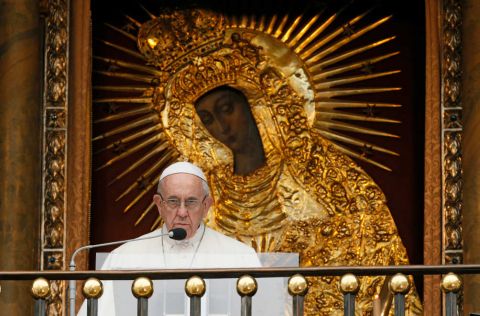 Pope Francis prays as he visits the Shrine of Mary, Mother of God, in Vilnius, Lithuania, Sept. 22. (CNS/Paul Haring)

"When we close our hearts for fear of others, when we build walls and barricades, we end up depriving ourselves of the Good News," Francis told crowds gathered outside the chapel for that visit.

"In the past, we built all too many fortresses, but today we feel the need to look one another in the face and acknowledge one another as brothers and sisters, to walk side by side, and to discover and experience with joy and peace the value of fraternity," said the pontiff.

Francis landed in Vilnius late morning Sept. 22. After being greeted by children wearing traditional dress, the pontiff headed to the country's presidential palace, a 14th century structure that has served as the presidential office space since 1997.

Crowds in the Lithuanian capital during the day's events were large and enthusiastic. At one point after his visit to the Chapel of the Gate of Dawn, Francis asked his driver to stop the pope-mobile so he could greet a group of elderly and sick people who had come out to see him.

Francis will continue his visit to Lithuania Sept. 23 by traveling about 70 miles west to the city of Kaunas, which served as Lithuania's capital during the period between the two World Wars. The pope will celebrate a public Mass there, have lunch with the country's bishops and host a meeting with priests and religious.

The pope is to travel to Latvia Sept. 24, returning to Lithuania that evening, and then to Estonia Sept. 25, before returning to Rome.