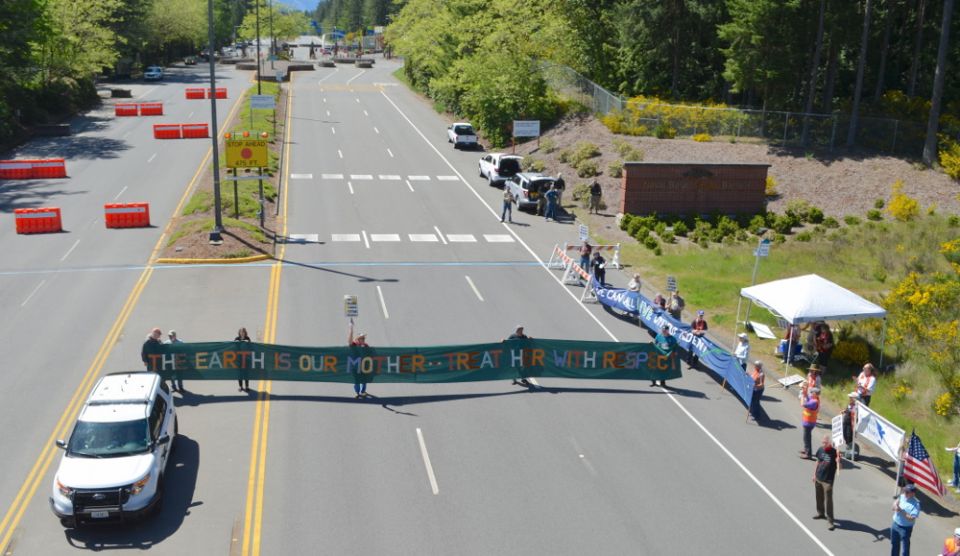 Protesters block the Main Gate entrance to Naval Base Kitsap-Bangor in Silverdale, Washington, May 12 in a Mother's Day for Peace protest against the Trident submarine base. (Ground Zero Center for Nonviolent Action/Glen Milner)

Martha Hennessy had plenty of time for an interview; she was under house arrest in Vermont, awaiting trial for entering the Kings Bay Nuclear Submarine Base with six other activists to protest nuclear weapons April 4 in St. Marys, Georgia.

While Hennessy, the granddaughter of Catholic Worker co-founder Dorothy Day, didn't relish the prospect of prison time, it wasn't her greatest fear during her discernment process. "Getting shot to death by the military was bigger," she said.

The participants in the Kings Bay Plowshares action are not the only group willing to take risks while opposing nuclear weapons. Holidays, anniversaries and holy days are popular times for resistance actions.

The Kings Bay action was on the anniversary of the assassination of Martin Luther King Jr. Other examples include annual protests at Lawrence Livermore National Laboratory in Livermore, California, held on Good Friday and on the anniversaries of the bombings of Hiroshima and Nagasaki, Japan. The Good Friday protests have happened for more than three decades; dozens were arrested at the latest.

Ten people were also cited in May for trespassing during a Mother's Day for Peace protest against the Trident submarine base housed at Naval Base Kitsap-Bangor in Silverdale, Washington. Later that month, six people were arrested at Hanscom Air Force Base in Lincoln, Massachusetts; five were arrested at an annual Memorial Day protest in Kansas City, Missouri, at the National Security Campus.

Such actions can simply involve activists blocking a gate or crossing a line onto a base and being briefly detained, but more intense actions, often associated with the Plowshares movement, can involve property destruction and lead to years in prison.

Dominican Srs. Carol Gilbert and Ardeth Platte have participated in several Plowshares actions, leading them to spend years in jail, including a stint of 33 months and 41 months, respectively. The two sisters say they are engaged in civil resistance — opposing the government's crimes — rather than civil disobedience — breaking an unjust law.

"All the laws of the land bespeak the fact that we are not to kill civilians," said Platte, noting that she and Gilbert have been working to make the law even clearer.

Platte and Gilbert are part of the International Campaign to Abolish Nuclear Weapons, which won the 2017 Nobel Peace Prize for helping bring about the U.N. Treaty on the Prohibition of Nuclear Weapons. Platte and Gilbert have recently been delivering copies of the treaty to the Pentagon and military bases, telling authorities they don't want to get arrested but will stay until someone receives the document.

"It's really important that no one chooses to be arrested," said Gilbert. "You choose to speak truth to power; you choose to do an action or a witness." 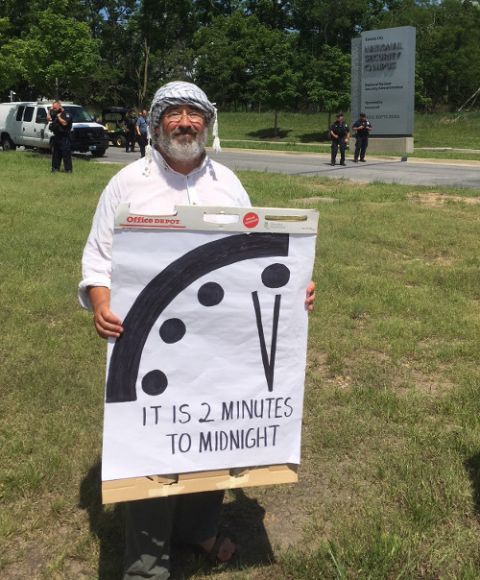 Brian Terrell holds a sign outside of the National Security Campus in Kansas City, Missouri, on Memorial Day, May 28, at a protest to oppose nuclear weapons. Terrell was arrested along with five others after crossing the trespass line at the base. (Molly Minnerath)

However, when activists do get arrested, many consider the experience part of their ministry.

Protests become political actions when activists have the chance to ask a court "to support and uphold the laws of the land which makes it criminal to threaten to use these weapons of mass destruction on God's people," Platte said.

Time spent in jail is also not wasted. "For us, the prison terms are also ministry, even though they're very difficult," said Platte, who described accompanying suffering inmates.

Prison time "gives middle-class people an opportunity to get inside to see how horrible these places are for many, many people," said Gilbert.

During the two months Hennessy recently spent in jail, "the corruption and the malpractice of the judicial system in Southeast Georgia just became very clear very quickly," she said. Under house arrest, she has been writing articles, making phone calls on behalf of the women she met in prison, and attempting to engage the media.

She has found that response to her action, even in Catholic and peacemaker circles, is not entirely positive. Plowshares actions are controversial because pacifists disagree about whether property destruction is violent.

"This is not necessarily an action that everyone can participate in or even approve of and I fully understand that," Hennessy said.

The impracticability of Plowshares actions is a concern activists should consider, said David Cortright, director of policy studies at the University of Notre Dame's Kroc Institute for International Peace Studies and an expert in nonviolent social change and nuclear disarmament.

"Movements succeed when they have a broader base of support and if our actions are not building that base, it doesn't mean that they're wrong or we should stop them, but we also might want to think about other actions," he said.

Cortright, who has been arrested several times protesting nuclear testing and apartheid, said risking arrest can be an effective tactic for social change.

"The willingness of people to sacrifice, to even suffer, on behalf of a cause and to act always nonviolently can be effective in reaching people's hearts and helping to dramatize the injustice and attract the attention of people," he said.

However, he added, not all actions are equally effective. Risking arrest can be more compelling when it is part of a larger movement, when it is combined with legislative advocacy and when it does not become routine.

Noting the controversy around actions that involve breaching security at military bases, Cortright said he wasn't sure such actions were the most effective, but also described them as a "moral witness to remind us of an injustice even when it's not a very big movement and when there's not much real immediate prospect of change." 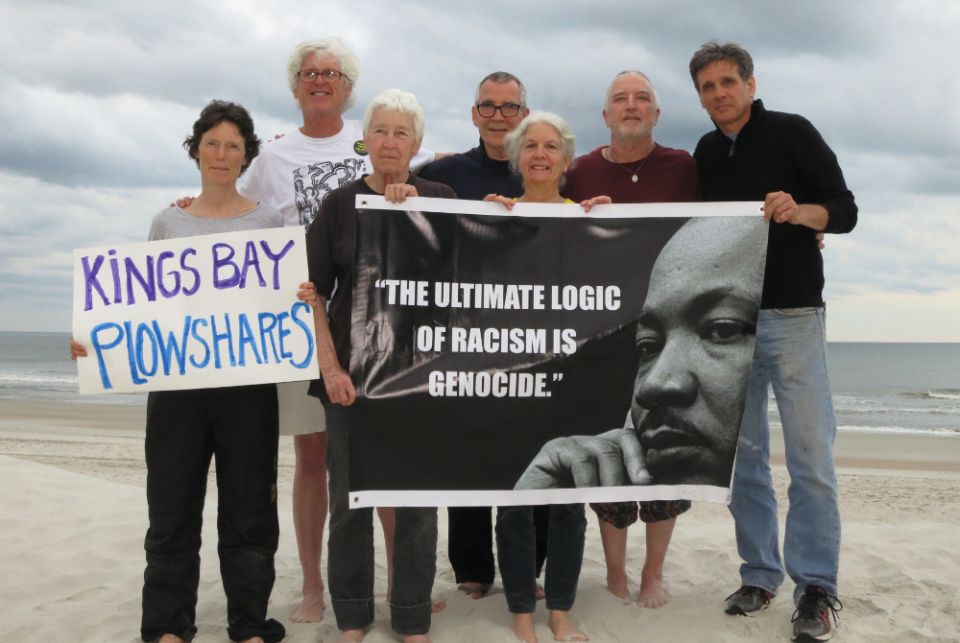 Seven Catholics who call themselves the Kings Bay Plowshares are seen in early April before they entered the Naval Submarine Base Kings Bay in Georgia to protest nuclear weapons. They were arrested and charged with conspiracy, trespass, and destruction and depredation of property. (CNS/Kings Bay Plowshares)

"I do feel like I'm fighting a dragon with a toothpick, but that's what we're called to do."

Activists find various sources of hope and inspiration in their work to create change when it can seem impossible.

Hennessy practices gratitude and is inspired by the "Little Way" of St. Thérèse of Lisieux. "When you're in jail, everything gets stripped from you, so even the tiniest little item becomes quite precious," she said.

Platte, 82, draws hope from her recent successes with International Campaign to Abolish Nuclear Weapons and from young people in the movement.

"When we walk into the United Nations to become part of the development of policy, I've had a hope in future generations like it has never been before," she said. "I'm more alive right now in these years than I have been all the years through direct actions. … When you're fulfilling your ministry, that's a gift, but I can't say that it hasn't been difficult."

Gilbert agreed but also described how faith can provide support through apparent failure. "It's not about success," she said. "Was I faithful? Was I trying to the end to do what needed to be done?"

A desire to preserve personal integrity by not remaining silent and therefore consenting to injustice can also inspire action, Cortright said.

"We have to speak out against the madness or be consumed by it. I disagree with violence, I disagree with war and these weapons and if I believe that I have to act on it and speak up when the occasion arises."

"I do feel like I'm fighting a dragon with a toothpick," Hennessy said, "but that's what we're called to do."

This story appeared in the July 27-Aug 9, 2018 print issue under the headline: Activists risking arrest keep up their 'moral witness' .