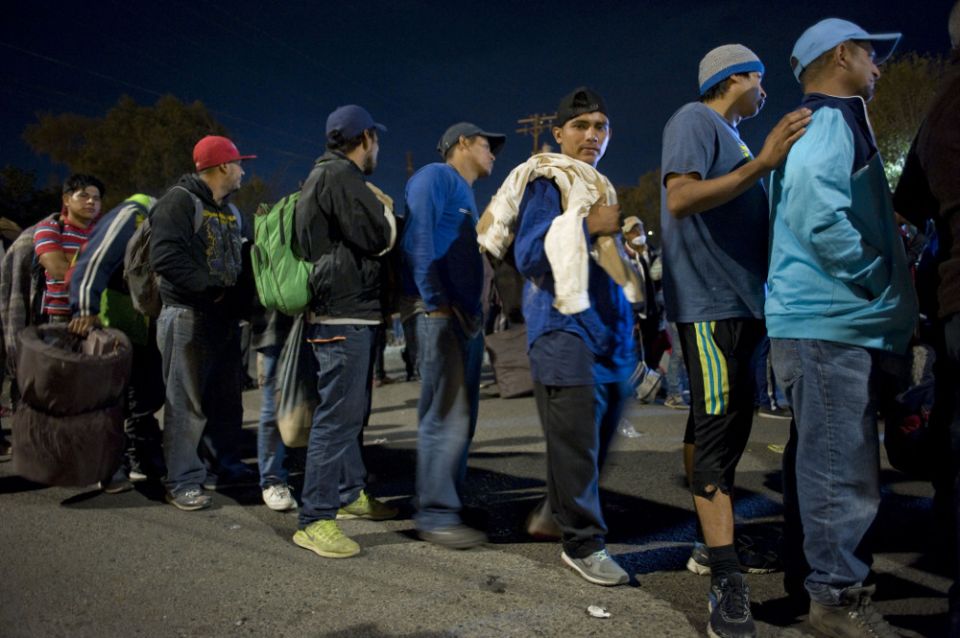 People wait in line in the evening to enter a camp at a sports facility in Tijuana, Mexico, set up to for people arriving Nov. 15 in a caravan of Central American migrants at the U.S.-Mexico border. The shelter opened the previous night and had more than 750 people, but dozens more lined up outside waiting to enter. (CNS/David Maung)

Mexico City — The first participants in the caravan of Central Americans arriving in Tijuana, Mexico, were met with hostility as residents of an affluent neighborhood confronted migrants wanting to camp on a beach near the border fence separating the United States and Mexico.

The residents demanded the migrants leave Tijuana, sang the Mexican national anthem and shouted, "Mexico!" as caravan participants were taken to shelters, according to press reports and videos on social media.

Fr. Andres Ramírez, director of Caritas Mexico in the Archdiocese of Tijuana, said such rough receptions were not the rule in Tijuana as the border city has a history of welcoming migrants and incorporating them into the community.

"Tijuana is a city of migrants," he said.

Ramírez attributed the hostility to Tijuana being the final stop prior to caravan participants hoping to cross into the U.S. to seek asylum. Some may have decided to stay in Tijuana, where factory work is abundant. How long the migrants stay in Tijuana remains uncertain as 3,140 people already are waiting to file asylum claims. U.S. Customs and Border Patrol has been processing only 90 requests per day, according to press reports.

The Archdiocese of Tijuana and religious organizations, including the Scalabrinian order, operate shelters for migrants in region. The facilities have filled with deportees in recent years, Ramírez said, meaning the archdiocese had little space to offer the caravan.

Still, the archdiocese has opened collection centers and plans to hold a collection at Masses Nov. 18.

The caravan departed San Pedro Sula, Honduras, Oct. 12, pushing past closed borders and police roadblocks and winding its way some 2,700 miles through Mexico to Tijuana.

Its improbable progress prompted more Central Americans seeking an escape from the poverty and violence of the central triangle countries — El Salvador, Honduras and Guatemala — to form caravans for safety and support.

Two more caravans were transiting central Mexico as of Nov. 16.

Caravans have been preferred by the migrants because they cut out the cost of hiring a smuggler, known as a coyote, whose fees now range between $8,000 and $13,000, said Rick Jones, youth and migration adviser at Catholic Relief Services in El Salvador.

Ironically, impatient migrants raced ahead of the pack as the caravan reached Mexico City, preferring to reach the border rapidly rather than to rest. Mexican officials did not impede their progress and some state governments provided buses — something done less for altruistic reasons than to move the migrants through their states quickly, according to observers accompanying the caravan.

Ramírez said of some of those early arrivals in Tijuana, "They didn't want to stay in shelters. They wanted to cross into the United States by whatever means possible."

Media photos showed some migrants climbing the border wall in the Playas de Tijuana area, where the border fence crosses the beach and extends into the ocean.

U.S. Customs and Border Protection has bolstered patrols and fortified a fence separating Playas de Tijuana and the U.S. by installing razor wire.

"There are soldiers out there. That's not normal," Ramírez said.

Javier Urbano, a professor at the Jesuit-run Iberoamercan University in Mexico City, said less than 1 percent of the Mexican population is foreign-born and the overwhelming majority of those originally are from the U.S., Canada and Europe.

With Central Americans, Urbano said, the attitude is "anti-poor people. ... It's kind of a phobia of marginalized groups."