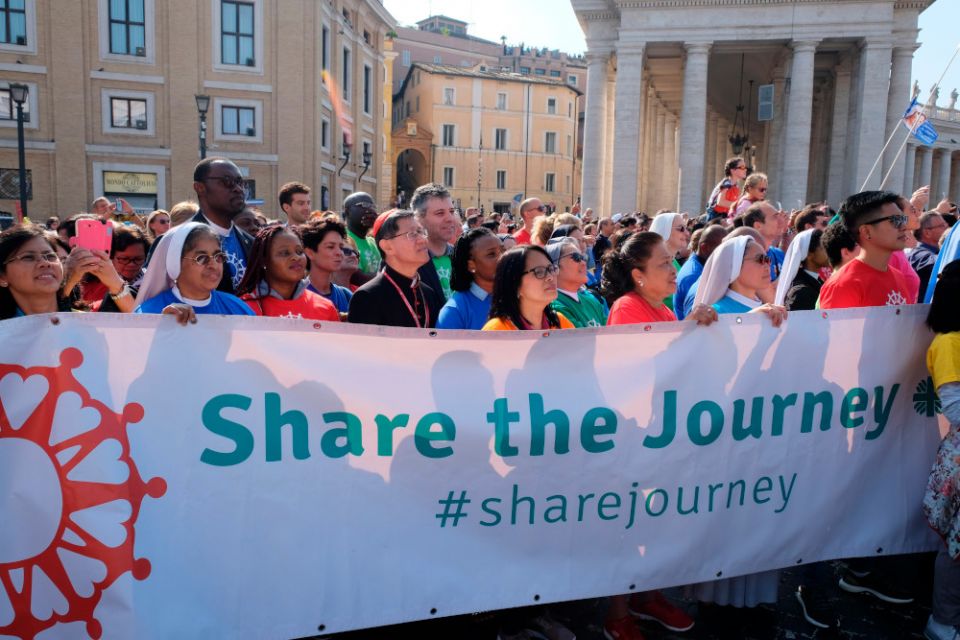 Cardinal Luis Antonio Tagle of Manila, Philippines, and others participate in the "Share the Journey" walk near the Vatican in this Oct. 21, 2018, file photo. As Caritas concluded the "Share the Journey" campaign in support of migrants, its leaders said much work remains to be done to change attitudes about immigration. (CNS/Caritas Internationalis/Patrick Nicholson)

Vatican City — Participants logged more than 370,000 miles in symbolic solidarity walks with migrants over the past four years, but the leaders of Caritas Internationalis know there are many miles to go in changing attitudes toward immigration.

"Where there is indifference and intolerance toward migrants, Caritas will stand by them to express the love and concern of the Mother Church," Aloysius John, secretary-general of Caritas Internationalis, told reporters June 15 at a conference marking the formal end of the "Share the Journey" campaign.

Launched in 2017 with the help of Pope Francis, the campaign was designed to encourage Catholics and others to get to know some of their migrant and refugee neighbors. The national Catholic charities that form Caritas Internationalis and their diocesan affiliates sponsored walks, shared meals and informal encounters as part of the initiative.

The aim was to build "bridges of hope between islands separated by fear," said Cardinal Luis Antonio Tagle, president of Caritas Internationalis and prefect of the Congregation for the Evangelization of Peoples.

"We gave ourselves a few challenges: not just seeing the migrants but looking at them with compassion; not just hearing their voice but listening to their stories and concerns; not just passing by the other side but stopping, as the good Samaritan, and living a moment of communion with them," the cardinal said.

Msgr. Bruno-Marie Duffé, secretary of the Dicastery for Promoting Integral Human Development, said the campaign included key elements of Catholic teaching on migrants, beginning with the fact that they are human beings with dignity and rights to be protected.

The campaign, he said, tried to help people realize that "each of them has a journey, an intimate pain that haunts them and each of them has a hope: to be considered as a person, to be called by name, to be welcomed and recognized."

With the COVID-19 pandemic continuing and with many nations claiming a need to protect their own citizens first, bringing "the risk of intensifying selfishness and the fear of strangers," Tagle said, "the end of Caritas Internationalis' global campaign is a call to continue to share the journey with migrants, especially at this most difficult moment. The campaign formally ends, but the mission continues."

Asked about ways to measure the success of the four-year "Share the Journey" campaign, both John and Tagle told stories of individual encounters where people were "converted" to recognizing the migrant in their midst as a brother or sister.

"People have been touched in different ways, touched by the suffering," John said, which is why Caritas Internationalis is asking people to go to www.caritas.org, light a virtual candle and share messages and stories that will be compiled and given to Pope Francis.

The campaign was looking for "a new consciousness, a new way of looking at people on the move and developing this culture where, instead of fear of the 'other,' we see a human person and we give them the love, the attention, that we know every human being deserves," Tagle said. "We cannot set a time frame; we cannot say, 'At the end of 2021 everyone, including Caritas workers, should have been converted already.' We hope that happens, but knowing human freedom and human frailty," some people will need more time.

Migrants were asked, 'Why did you leave your home?' Here's what they said.