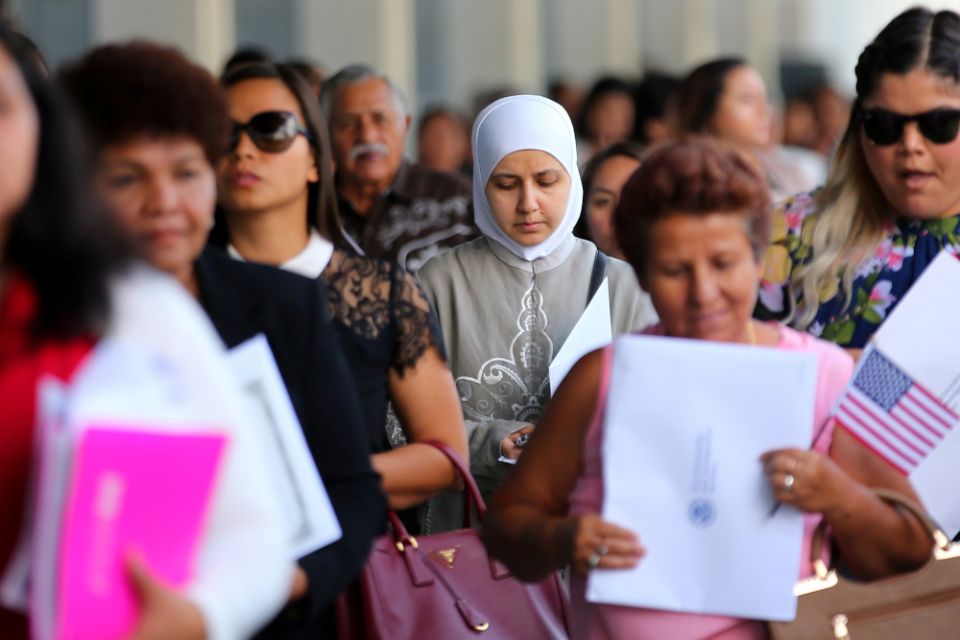 Dominican Sister Donna Markam, president and CEO of Catholic Charities USA, urged the Trump administration "to reconsider this harsh and unnecessary policy and rescind it in its entirety." She said it will impose "a chilling effect on access to basic services, creating fear among eligible individuals threatening family unity and stability."

She also said the decision in favor of this policy "signals a watershed change of course from the best moments of our American heritage of welcoming immigrants and refugees."

A USCCB statement described the ruling as "very concerning, as it will have an immediate and negative impact upon immigrant and newcomer families."

The bishops said the ruling will have "devastating consequences for immigrant communities, as those impacted are cast into the shadows because they fear deportation and family separation for seeking critical support."

In its 5-4 ruling, the court gave the Trump administration the go-ahead with its "public charge" rule allowing the administration to deny green cards to legal immigrants based on their reliance on public assistance such as food stamps, Medicaid and housing vouchers.

The rule was challenged by immigration groups and states, including California, Illinois, Maryland and Washington. It was put on hold by a nationwide injunction from a federal district court in New York.

The Supreme Court's order reversed this injunction while legal challenges continue in several federal courts. A separate injunction still blocks the rule from being implemented in Illinois.

The government had argued to the Supreme Court that it would suffer "effectively irreparable harm" if it could not implement the rule while it appealed a pair of orders by a federal district court in New York.

The Supreme Court's brief order said it temporarily put the lower court's rulings on hold until the government's appeals to the U.S. Court of Appeals for the 2nd Circuit or even the Supreme Court, were resolved.

The rule, which stems from federal immigration law, could prevent immigrants from receiving green cards, or documentation certifying permanent U.S. residency, if the government believes that they could become a public charge by their reliance on government assistance.

Last August, the Department of Homeland Security said the term "public charge" refers to noncitizens who receive government aid such as cash, health care or housing for more than 12 months over a three-year period. The rule also considers age, employment history and finances to determine if an immigrant could become a future public charge.

In a separate opinion to the court's order, Justice Neil Gorsuch, joined by Justice Clarence Thomas, said district court judges should no longer be allowed to issue nationwide injunctions.

"The rise of nationwide injunctions may just be a sign of our impatient times," Gorsuch wrote. "But good judicial decisions are usually tempered by older virtues."

Ken Cuccinelli, the acting deputy secretary of Homeland Security, praised the court's order in a Jan. 27 statement, saying: "Self-sufficiency and self-reliance are key American values not to be litigiously dismissed, but to be encouraged and adopted by the next generation of immigrants."

"We plan to fully implement this rule in 49 states and are confident we will win the case on the merits," he added.

A Jan. 27 statement by CLINIC said the court's action is far from the last word on whether the government's rule is legal.

"While we are obviously disappointed that the Supreme Court has allowed the public charge rule to be implemented while the court challenges proceed, we remain hopeful that the rule will ultimately be declared illegal," said Bradley Jenkins, CLINIC's federal litigation attorney.

He added that the justices "did not say anything one way or another about whether they thought the public charge rule violates the law."

The USCCB statement stressed that the Supreme Court's decision "focuses solely on the preliminary injunction and, as such, we remain hopeful that the courts will declare the 'public charge' rule illegal. "

In the meantime, the bishops said the church will "redouble public education efforts to ensure that immigrant families, and our direct services networks which assist them, are educated about this rule and its impacts."

A Jan. 27 tweet from the American Immigration Council said enforcing this rule would mean "many people could be forced to choose between accessing the assistance they and their children need now or securing permanent legal immigration status to be with their families in the future."