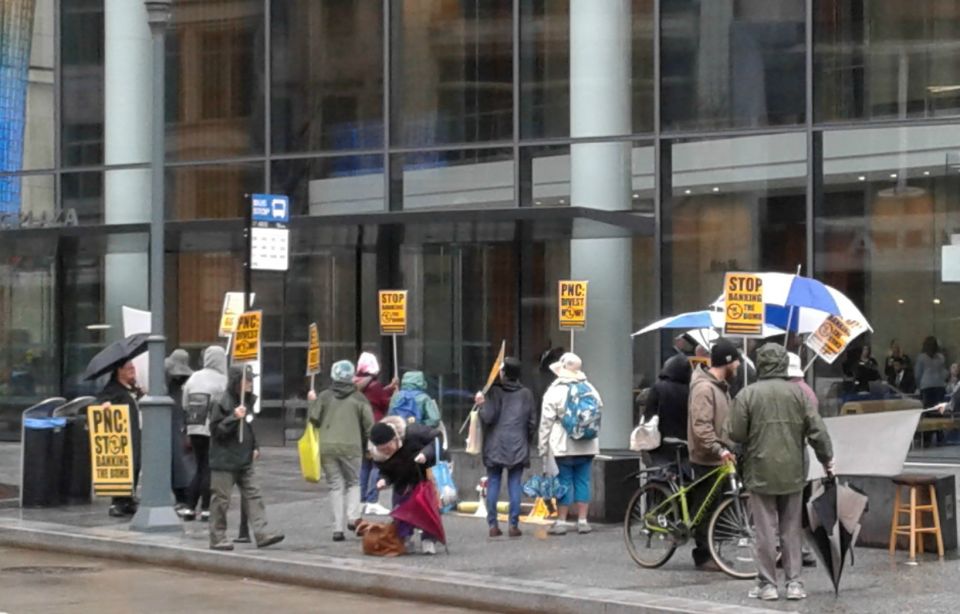 Protesters from the Stop Banking the Bomb campaign, including members of the Association of Pittsburgh Priests, picket outside a shareholder meeting for PNC bank in Pittsburgh April 24 to encourage the bank to divest from nuclear weapons producers. (Courtesy of Fr. Paul Dordal)

Members of the Association of Pittsburgh Priests, which described itself in an April 24 press release as a "diocesan-wide organization of ordained and nonordained women and men who act out our baptismal call to be priests and prophets" were among a group of 15-20 people who picketed outside a PNC shareholder meeting.

"The Association of Pittsburgh priests seeks to put pressure on PNC by supporting public information campaigns and nonviolent direct actions, in efforts to convince PNC to drop the harmful involvement in funding the production and maintenance of nuclear weapons," the press release says.

According to the release, the International Campaign to Abolish Nuclear Weapons (ICAN) ranks PNC 68 out of 226 in its list of banks that are most involved in funding nuclear weapons.

While the group protested outside, Fr. Bernard Survil of the Diocese of Greensburg, Pennsylvania, attorney Ron Read and Pennsylvania State University physics professor Peter Deutsch attended the shareholder meeting and raised concerns about funding nuclear weapons during the question and answer session. They had been admitted as proxies for the Felician Sisters.

During his testimony, Survil pointed out that the bank's image might be tarnished by the association with nuclear weapons, especially as the Catholic Church becomes more opposed to nuclear weapons.

"I simply started by saying we've all seen those people outside with their picket and their signs," Survil told NCR. "We should understand that it's just not a few people here in the district area that are concerned, but the world is concerned because last July there were 122 nations that signed an agreement with the U.N. to work toward the abolition of nukes on the world level."

According to a report from the Pittsburgh Post-Gazette, PNC President, Chairman and CEO William Demchek did not deny that the company had money invested in nuclear weapons producers, but he did dispute the dollar amount cited by the questioners and pointed out that the companies also made other products.

The paper also reported that Demchek praised the companies and said the bank wasn't planning to "pull back" from the investments or "take a stand" on the issue, instead leaving nuclear policy to the government.

Demchek also said he hadn't been hearing widespread concerns about nuclear weapons, Survil reported, a response that did not surprise the priest or strike him as inaccurate.

While recent popes have condemned the use of nuclear weapons, with Pope Francis recently criticizing mere possession, this attitude is not widespread among the church in the United States, Survil said. "At the top we've had a clear consensus among recent popes. It's once you get into empires like the United States of America that people don't want to hear about it."

The Association of Pittsburgh priests and other locals are trying to shift this dynamic, both with the action at the shareholder meeting and with three upcoming showings of the film "The Nuns, the Priests, and the Bomb" at various Catholic locations in and near Pittsburgh. Society of the Holy Child Jesus Sr. Megan Rice, a Plowshares activist, will attend.

The group is also not alone in its efforts to oppose nuclear weapons, Survil said. They were inspired both by ICAN and by the Kings Bay Plowshares group, seven activists who remain in prison in Georgia after breaking in a nuclear submarine facility with hammers and baby bottles of their own blood.

ICAN in particular has a campaign called Don't Bank on the Bomb that encourages divestment from nuclear weapons worldwide. Although it has had some success, Survil pointed out that within the United States nuclear weapons aren't always on people's radar, even for groups that focus on ethical investing.

While religious orders are quicker to change, Survil added, dioceses are slow to consider divestment, and he wouldn't be surprised if many priests' retirement funds were partially invested in nuclear weapons.

"If we could get them to open their eyes and look at that I think it would shake the foundations of the industry," he said.