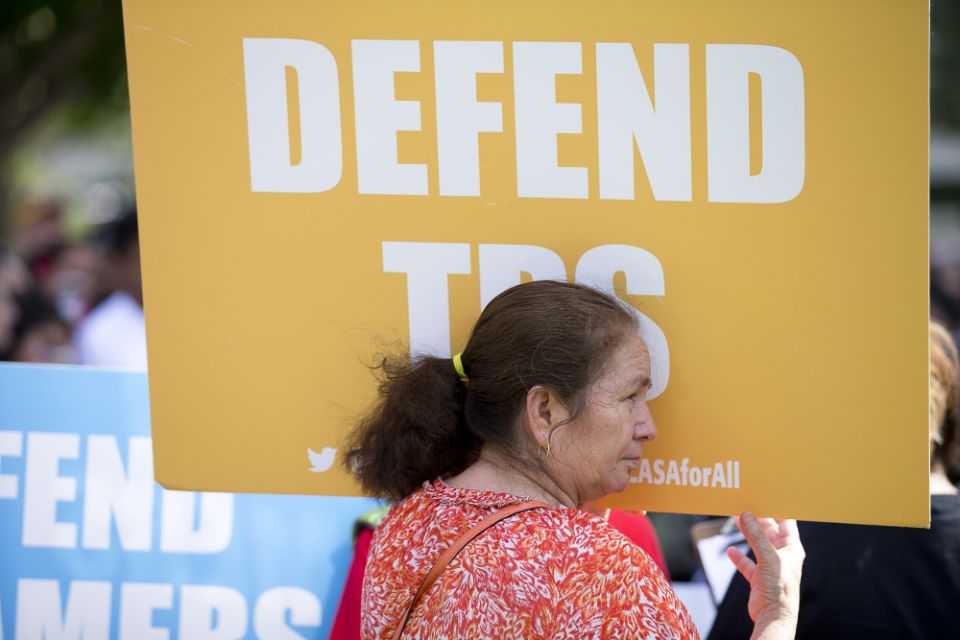 A woman holds a sign showing her support for Temporary Protected Status, or TPS, during a rally near the U.S. Capitol in Washington Sept. 26. (CNS/Tyler Orsburn)

Washington — The chairman of the U.S. bishops' migration committee and the heads of four Catholic agencies have urged the secretary of the U.S. Department of Homeland Security to extend Temporary Protected Status for El Salvador by 18 months.

The TPS designation is for those who have come to the U.S. from certain countries because of a natural disaster, continuing armed conflict, criminal violence or other extraordinary conditions. It authorizes employment and protection from deportation for about 320,000 people from 10 countries.

Currently, the TPS status for the roughly 200,000 Salvadorans in the United States extends through March 9 but a decision to extend or terminate TPS for a designated country must be made at least 60 days prior to the expiration date. For Salvadorans, the U.S. government must make that decision by Jan. 8.

Terminating TPS for Salvadorans "now would be inhumane and untenable," because of current conditions in their home country, Catholic leaders said in a letter to Secretary Kirstjen Nielsen of Homeland Security. The letter cited a report from a fact-finding delegation that visited the Central American country in August.

"Entire families, not just children, currently face targeted violence," said the letter, dated Dec. 20 and released Dec. 21 by the U.S. Conference of Catholic Bishops. Between 220,000 and 400,000 Salvadorans are "internally displaced," which illustrates "already existing safety issues" and an ongoing humanitarian crisis, it said.

"The Salvadoran government does not currently have the capacity to adequately handle the return of its TPS population," because it has an inadequate system for receiving, protecting and integrating into society "internally displaced people and annual returnees," the letter said. In 2016, about 52,600 Salvadorans returned home.

"The country suffers from widespread housing shortages, lack of access to clean water, disease and food insecurity as a result of the 2001 earthquakes and subsequent natural disasters," it added.

In November, the Trump administration wiped out TPS, effective July 2019, for about 59,000 Haitians who benefited from the program after a devastating earthquake on the island in 2010. Besides El Salvador, the TPS program for Honduras also will be up for renewal in early 2018.

In their letter to Nielsen about El Salvador, the Catholic leaders urged her to "show compassion and patience" as the country continues "to improve its citizen security and humanitarian capacity."

"Terminating TPS for El Salvador would likely destabilize this key strategic, regional partner, undermining the tremendous investments of the U.S. government," they said. It also would divide families, as parents who have U.S. citizen children would not take them if they had to return to El Salvador, the Catholic leaders said.

Citing Catholic social teaching that supports the U.S. welcoming migrants and refugees, the group said that church teaching also supports the right of TPS holders, like all immigrants, to safety and the ability to care for their children. They added that the right of a nation to regulate its borders must be "exercised with justice and mercy" and balanced with immigrants' rights "to human dignity and life."

The letter also reiterated the Catholic Church's commitment to stand "ready to support measures to protect the well-being and dignity of Salvadoran families here and abroad."