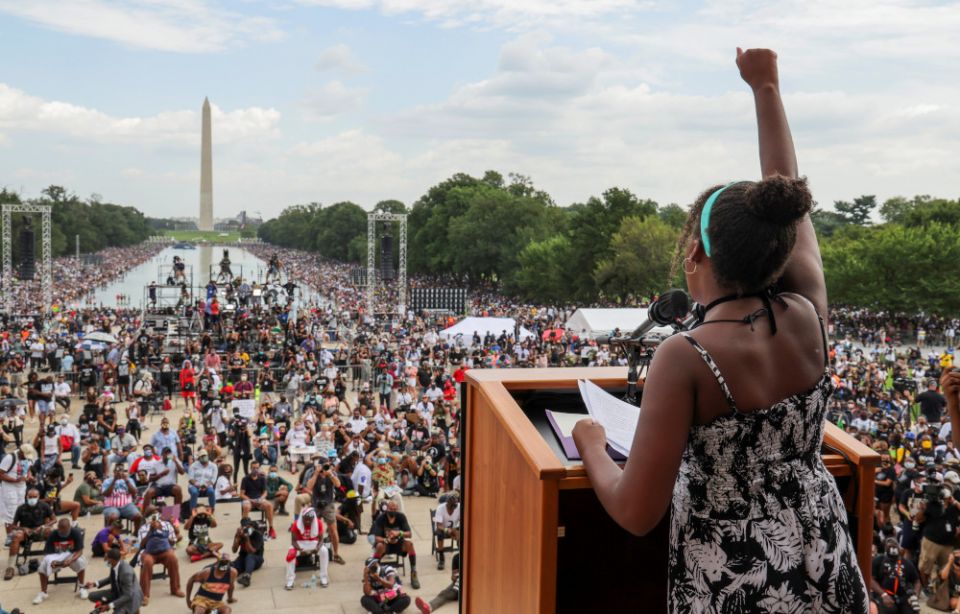 Yolanda Renee King, 12-year-old granddaughter of slain civil rights leader Rev. Martin Luther King Jr., thrusts her fist as she speaks to the crowd at the Aug. 28, 2020, "Get Your Knee Off Our Necks" Commitment March on Washington 2020 from the spot where her grandfather delivered his "I Have a Dream" speech 57 years ago in Washington. (CNS photo/Reuters/Jonathan Ernst)

Washington — On the steps of the Lincoln Memorial, college student Aalayah Eastmond, of Trinity Washington University, spoke of her dream Aug. 28, at the place where iconic civil rights leader, the Rev. Martin Luther King Jr., delivered his famous "I have a dream" speech 57 years before.

She echoed many of the same issues Rev. King raised, particularly lack of equality for the country's Black citizens and an end to violence against them.

Catholic organizations and parishioners were represented in the crowd that afternoon. Margie Legowski, a member of Holy Trinity Catholic Church in Washington, said despite the heat and humidity, and even the pandemic, it was important to show up "in solidarity and support for my brothers and sisters and because I'm Catholic."

"That means we're family. We are all brothers and sisters," she said.

Many, donning masks and having their temperatures taken before entering the mass event, attended in person, but organizers also held a virtual event for those who couldn't make it because of physical conditions that would put them at risk because of the pandemic.

Network, the Catholic social justice lobby organization, published online reflections on the eve of the event where its community gathered to pray, reflect and recommit to the work of racial justice.

In one of the reflections, Tralonne Shorter, the organization's senior government relations advocate, recalled that almost six decades ago, civil rights and human rights activist Ella Baker had lamented the killing of Black men, saying that their unjust deaths had to be as "important to the rest of the country as the killing of a white mother's son."

"On the eve of the 57th Anniversary of the March on Washington, Ms. Baker's words still hold true for Black moms who are growing weary of marching for justice fighting against racism and sexism from slavery until now," she said.

In a summer of unrest, the participants' presence at the march seemed to echo the Trinity student's call to stop the violence and the social conditions that have led to the early death of countless Black men in the country.

Eastmond, who said she became vocal against violence after surviving a mass shooting at Marjory Stoneman Douglas High School in Florida in 2018, focused on gun violence in a variety of instances and how it leads to a disproportionate amount of deaths among Black communities.

"I am not the first in my family to be affected by gun violence," she said. "My uncle Patrick was gunned down in the streets of Brooklyn, New York, at the age of 18, just months after being beaten by NYPD, who deemed his Black body in a white neighborhood a threat."

Violence in Black communities, she said, is not a coincidence.

"It is a result of poor choices made by policymakers that all too often have racial undertones associated with it," she said. "The flow of guns into already struggling communities is often facilitated by white gun store owners who look the other way as traffickers buy guns used to terrorize Black communities."

That creates multigenerational cycles of poverty, as well as social and economic injustice. Enforcement has failed to prevent the flow of guns into Black communities and instead has perpetuated violence in those communities, she said.

She called for a "shift from a punitive to rehabilitative model in the prison system," as well as funding of schools in Black communities and creating jobs there, as well as accountability for police who kill unarmed Black men and women "and only get paid desk duty" as punishment for taking a life.

Legowski said it was touching to see older people attend the event, along with people of all ages, demanding a stop to the killings of community members targeted because of the color of their skin.

"It's just a stroke of fate that I was born white or it could easily be me or my friends who have been killed so purposely," she said.

A Black nun and a Black writer look at Black Power