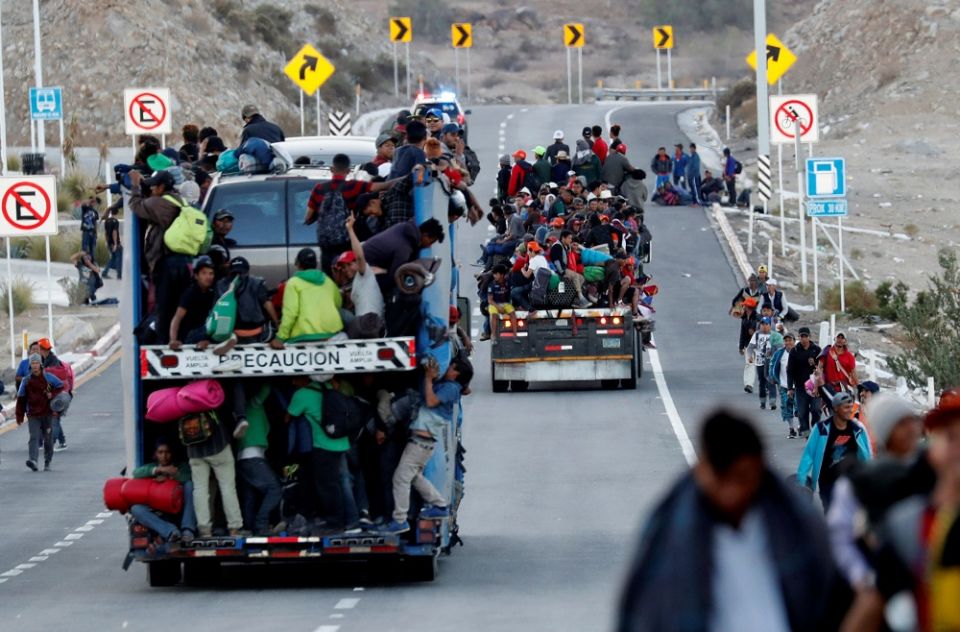 Migrants from Central America, part of the migrant caravan traveling to the U.S., ride in trucks Nov. 20 in Mexicali, Mexico. (CNS/Kim Kyung-Hoon, Reuters)

Washington — Over 3,000 Catholics and other people of faith signed a pledge Nov. 19 to express solidarity with all those seeking asylum in the United States and "promising to be good neighbors to those seeking refuge in our community and to build a community where all are welcome."

The same day U.S. District Court Judge Jon Tigar in San Francisco put a temporary hold on an asylum policy issued by President Donald Trump Nov. 9 that required people entering the country without documents to present themselves formally at official ports of entry to be eligible for asylum.

The policy, issued as a presidential order, was to be in effect for 90 days until Tigar issued his ruling. The Trump administration pledged to appeal, decrying the fact a "single judge" can issue "a nationwide temporary restraining order preventing the executive branch from performing its constitutional duty to enforce our borders and control entry into the United States. This decision will open the floodgates."

Trump issued the order ahead of the arrival of caravan of tens of thousands of people from Central America who have traveled north for weeks to seek asylum in the United States. More than 2,500 people split off the large group and have been arriving in Tijuana, Mexico, since Nov. 13. The majority of those in the caravan were expected to be heading to the Texas border area.

The solidarity pledge was organized by a coalition of groups, including the Franciscan Action Network, the Columban Center for Advocacy and Outreach, Faith in Public Life and the Evangelical Lutheran Church in America.

Franciscans "believe every human person has dignity and the right to seek refuge when threatened with danger," said Patrick Carolan, executive director of the Franciscan Action Network. "Having seen firsthand the suffering and fear the Honduran people endure daily, we feel it is our moral duty to welcome and protect the asylum seekers in the migrant caravan who simply seek a safe place to live and raise their kids. To turn them away at our border would be inhumane.”

"More importantly, it is a violation of many faith traditions, which instruct us to welcome the stranger and defend the vulnerable," she said. "To deny children and families seeking safety a fair chance for security is sin."

In an earlier joint statement Catholic leaders said the Trump policy "will restrict and slow access to protection for hundreds of children and families fleeing violence in Central America, potentially leaving them in unsafe conditions in Mexico or in indefinite detention situations at the U.S./Mexico border."

"We reiterate that it is not a crime to seek asylum and this right to seek refuge is codified in our laws and in our values," they continued. "We urge the administration to seek other solutions that will strengthen the integrity of the existing immigration system, while assuring access to protection for vulnerable children and families."

They added: "The Catholic Church will continue to serve, accompany and assist all those who flee persecution, regardless of where they seek such protection and where they are from."