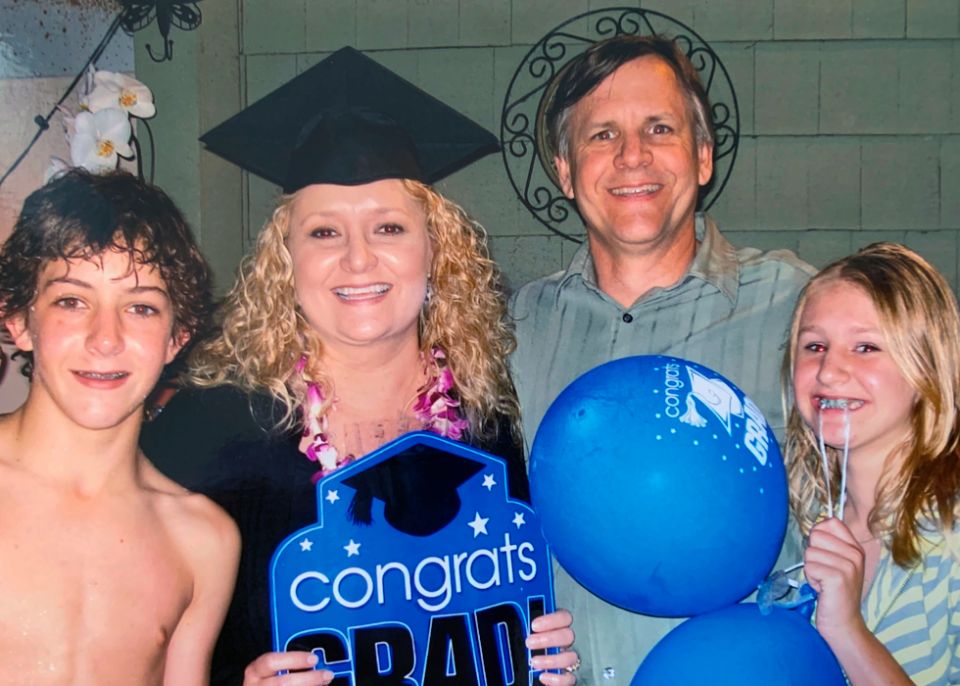 This 2009 photo provided by the Biel family, shows the late Kristen Biel, at her graduation party, with her husband Darryl Biel and their two children, Dylan and Delaney. On Monday, the Supreme Court will hear arguments in a disability discrimination lawsuit she filed against her former employer, St. James Catholic School in Torrance, California. A judge initially sided with the school and halted the lawsuit, but an appeals court disagreed and said it could go forward. (Biel family photo via AP)

Washington — First, Kristen Biel learned she had breast cancer. Then, after she told the Catholic school where she taught that she'd need time off for treatment, she learned her teaching contract wouldn't be renewed.

"She was devastated," said her husband Darryl. "She came in the house just bawling uncontrollably."

Biel died last year at age 54 after a five-year battle with breast cancer. On May 11, the Supreme Court will hear arguments in a disability discrimination lawsuit she filed against her former employer, St. James Catholic School in Torrance, California.

A judge initially sided with the school and halted the lawsuit, but an appeals court disagreed and said it could go forward. The school, with the support of the Trump administration, is challenging that decision, telling the Supreme Court that the dispute doesn't belong in court.

The case is one of 10 the high court is hearing arguments in by telephone because of the coronavirus pandemic. The justices heard arguments in four cases this week. Next week includes Biel's case as well as high-profile fights over President Donald Trump's financial records and whether presidential electors have to cast their Electoral College ballots for the candidate who wins the popular vote in their state.

Biel's lawsuit is one of two cases being heard together that involves the same issue: the "ministerial exception" that exempts religious employers from certain employment discrimination lawsuits.

The Supreme Court recognized in a unanimous 2012 decision that the Constitution prevents ministers from suing their churches for employment discrimination. But it specifically avoided giving a rigid test for who should count as a minister.

Now the Supreme Court will decide whether Biel, and another former teacher who sued a different Catholic school for age discrimination, count as ministers barred from suing. Both Biel and the other teacher, Agnes Morrissey-Berru, taught religion, among other subjects.

Jeffrey Fisher, an attorney for Biel and Morrissey-Berru, says if his clients lose, it could have "innumerable, cascading consequences" on employees of religious institutions. He's argued employment law protections could be denied to nurses at religiously affiliated hospitals, counselors at religious summer camps, and cooks and administrators in social services centers.

In 2013, she was offered a job teaching first grade two days a week at St. James. The school's principal, Sister Mary Margaret Kreuper, offered her a full-time job teaching fifth grade the next year. She gladly accepted.

Biel taught everything: English, spelling, math, science, social studies and religion. As she was nearing the end of her first full year teaching, she was diagnosed with breast cancer and told Kreuper she'd need time off. She later learned that her contract wouldn't be renewed.

Kreuper is no longer at the school either. She retired and made headlines when it was discovered she and another nun used school money to pay for gambling trips to Las Vegas.

The school, for its part, says Biel's classroom was observed to be "chaotic" and "often out of control" and that she was told months before her cancer diagnosis that it would be difficult for her contract to be renewed.

Eric Rassbach, a lawyer for the Becket Fund for Religious Liberty, which represents St. James and Morrissey-Berru's former employer, Our Lady of Guadalupe School, says his clients are strongly against discrimination of any kind and didn't discriminate in either case.

But he says neither dispute belongs in court. "Courts have said that under the Constitution they can't be involved in choosing or overriding a church or synagogue or mosque's decision about who is carrying out core religious activities," he said.

If someone is a minister, they can't sue over being fired, and Biel counts as a minister because, among other things, she taught religion, prayed with her students and attended Mass with them monthly, he argues.

Still, when Kristen Biel lost her job, her husband wasn't necessarily in favor of a lawsuit. He believed she should spend her energy on getting well. Her view, he said, was: "This is not right. They can't do this to people."

So Biel fought the school and she fought cancer. After chemotherapy, a double mastectomy and more chemotherapy, she seemed cancer-free. Her hair started to come back, and the Biels went on a celebratory cruise to Alaska. But then the cancer returned. It wasn't long until it was out of control.

"I literally promised my wife on her deathbed that I would see this through," Darryl Biel said, adding: "She needed this to be righted."