Chili and hospitality, rain or shine: 'We're just doing what we can do' 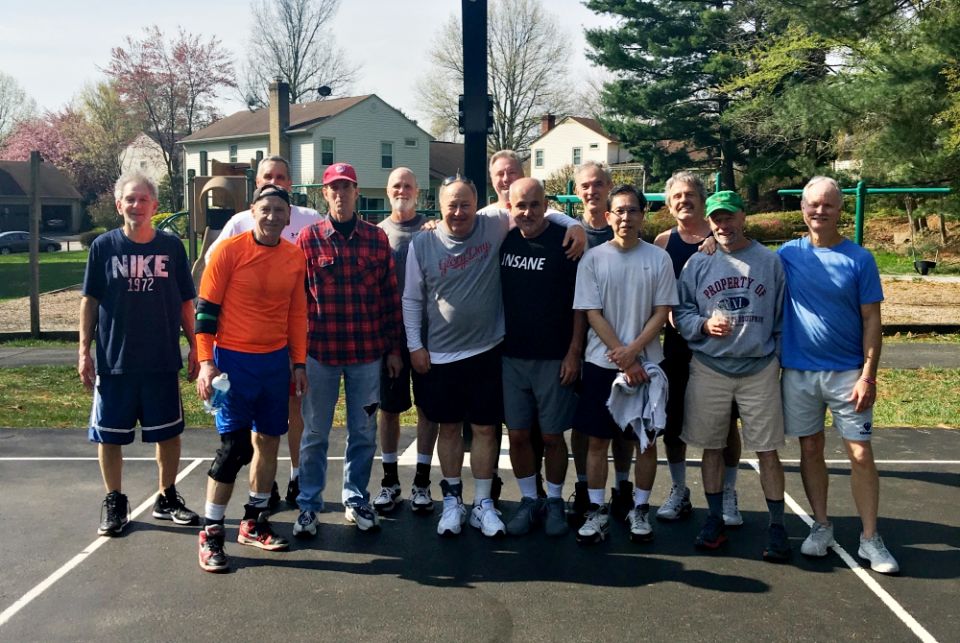 Jack McHale (center, black shirt) with friends at their weekly Sunday morning basketball games. McHale has recruited many of the men from these games to join on his trips into D.C. over the years. (Provided photo)

Four buddies — Jack, Bill, Jerry and Larry — are stuck, bumper to bumper. They're heading north on I-395 into Washington, D.C. Traffic getting in and out of the city is always bad around rush hour, but none of them ever remember it being this rough — apart from maybe the blizzard Jack and Larry got stuck in that one time. On that occasion they tried to pull off the road to stop into a pub for a drink and a chat. Today, no pubs in sight.

Jack, who always drives, is on his best behavior. Despite his background as a "New York driver," he's being patient. He hasn't gotten angry yet and keeps letting people kindly merge in front of the large van he borrowed from Shirley Casey, owner of Shirley's Catering in Burke, Virginia.

The guys call themselves "talkers." Every silence is filled. But not in an uncomfortable, forceful way. Conversation flows easily between the men — jokes, needles and exhaustive college basketball references alike. They have a clear chemistry that's built up from years of playing pick-up ball together every Sunday morning, like old teammates, in this case all older than 65 and retired. Except for Larry, he's 64 and still "bringing home the bacon."

"I could have been a great front man for a rock band, but I wasn't in that line when God was handing those gifts out," says Jack. "I was in the beer line."

Jack says that Bill was his son's basketball coach back in the day. Larry is an avid biker. And Jerry, he's a great ...

"Bullshitter," one of the other guys interrupts.

Jerry asks his friends if they want him to list all the different medical procedures he had done this week, again. The guys not-so-graciously decline.

There is a lot of love in this group, and a ton of joy in what they do together, even in a traffic jam.

The guys are on their way to serve some homemade chili to dozens of homeless people in McPherson Square in downtown Washington, two blocks away from the White House.

Jack says he doesn't like calling the people they serve "homeless" though. "I call them my brothers and sisters."

The guys go through this routine about once a month. Jack borrows the van from Shirley, picks up the other guys, loads the car up with pots of chili, and drives into the city to deliver the goods around 4 p.m. It's not their jobs, it's just something they do together, as friends, rain or shine. Rain is the worst though, the four all agree on that.

"We're all here because of Jack," Bill says at one point.

Jack McHale, the driver, is the leader of the bunch. He's been driving this van and delivering quality meals to people in D.C. for over 25 years now.

In recent years, he started inviting his buddies that he plays ball with to join him, Catholic or not. Buddies like Bill, Jerry and Larry. Jack says they're all "good hoopsters but, more importantly, they care."

Over the years, Jack and the gang tried bringing in different foods. Spaghetti didn't really do it; potatoes took too long to serve. Eventually, they figured out chili works the best.

Why chili? "Stays hot." And "they like chili," Jack says of the people they serve. That's important to him, that they enjoy the food.

Jack has it all figured out. His system is both art and science.

He started doing this way back in 1987 after an outing with a couple of nuns. Two Benedictine sisters he was friendly with from his parish — St. Mary's in northern Virginia — invited him to a talk at the Dorothy Day Catholic Worker House in D.C.

"Dorothy Day." The name sounded familiar to him. He thought she spoke at his college graduation in 1973, but he was too busy thinking about what bar he'd hit after the ceremony that he didn't pay much attention (he now says, knowing what he does, he would worship the ground Dorothy Day walks on). Anyway, he decided to tag along with the sisters.

Jack enjoyed the talk, and then became friendly with members of the Catholic Worker House. They told him that they drove a van into D.C. to deliver meals to homeless people every Thursday afternoon. They invited him to join and, once again, he decided to tag along. Thirty-two years later, Jack is still delivering home-cooked meals to his "brothers and sisters."

The Catholic Workers have two core values to their mission that really resonated with Jack back then and continue to inform his service to this day.

Jack says that he has been arrested with the Catholic Workers twice. "Once on purpose and once on accident." At 68, he continues to resist. Every second Saturday of the month, he rolls out a model drone in front of the White House to protest indiscriminate drone killings. "You ought'a come down with me one of those days."

The other is hospitality.

Hospitality is the reason Jack volunteered, and continues to volunteer, to drive Shirley's van from Virginia into D.C. on Thursdays when the Catholic Workers aren't available to deliver food downtown themselves.

Hospitality is what drives Jack and the guys' entire enterprise.

"We treat them exactly the way we would expect to get treated," he says. 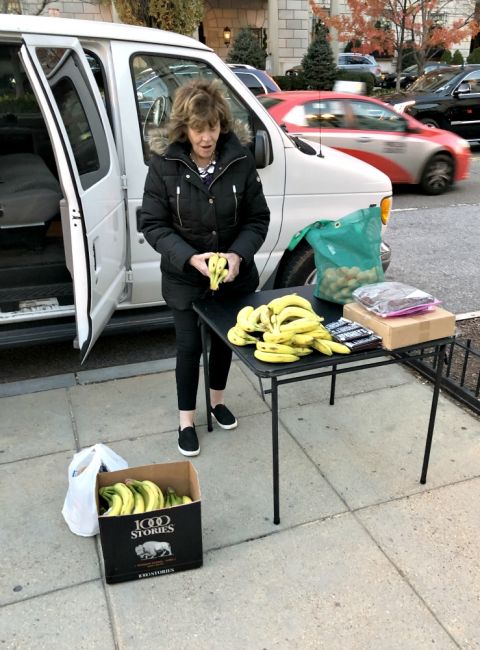 A woman helps set up a fruit and dessert station for the homeless. (Jack McHale)

That includes providing choices — beef or chicken chili — and making sure everything is homemade and delicious, like fresh brownies and Jack's signature iced tea everyone enjoys so much. Everyone walking by is welcome to eat, no questions asked, and encouraged to take as much as they'd like. "Help yourself" is heard often.

"It's a little bit different every time," Jack says of delivering the food.

Today, it's the traffic that's changing things up. Nobody is sure why it's so crazy. Could be because the Nationals just hosted the Mets for Opening Day. Jack, donning a Yankees cap, proudly mentions the Yanks won at least three different times. Maybe the backup has something to do with powerhouse basketball programs Duke and Michigan State being in town for the Sweet 16.

Regardless, the guys adjust. They're ball players; they know how to read and react to get the job done.

Multiple buses block the van's usual parking spot, so, with the van stuck in the middle of the street, everyone but Jack hops out to start carrying food and utensils across the park to set up. A couple people already in line to receive food see what's happening and volunteer to help bring things over.

Bill mentions that sometimes people walking by, fresh out of work from surrounding office buildings, see the guys serving food and donate cookies or spare cash to the cause. On this day, some of the homeless people help pass out candy and chips. Others walk extra bowls of chili to people across the street who have trouble walking. One woman devotedly fills dozens of paper cups to the brim with Jack's iced tea and warmly distributes them by hand to any and all who want one.

One young man thanks Larry and tells him the chili was "the bomb." "You know what that means?" he teases the older man.

There is a familiarity and a kinship between the guys and those they serve. They have genuine relationships. The people lined up are an array of familiar faces and names, which is nice but, as Jack says, "also very sad, in a way."

Many of those they serve are, how Jack describes, "chronically homeless." The guys are well aware that a simple meal is not going to turn these folks' lives around or solve broader systemic issues. But that understanding, like the rain, doesn't keep the guys from showing up each month.

To remind himself of this, Jack keeps a print out of a special prayer in his pocket. It is by the late Bishop Ken Untener from Saginaw, Michigan:

We cannot do everything, and there is a sense of liberation in realizing that. This enables us to do something, and to do it very well. It may be incomplete, but it is a beginning, a step along the way, an opportunity for the Lord's grace to enter and do the rest.

By the time the line of people runs out, the chili is mostly gone. As always, the guys brought the perfect amount. As they pack up, one woman stands on the sidewalk outside the van as their "bodyguard," making sure they get out "safe and sound."

Jack tells her they'll be back in a couple of weeks, on Holy Thursday. "It's a big one," he tells her.

"See you then, Jack," she waves with a smile.

As the guys drive off, it is clear that they did something today. And they did it very well.

Justice | Chili and hospitality, rain or shine: 'We're just doing what we can do'

For Ursuline sister, every day is World Food Day