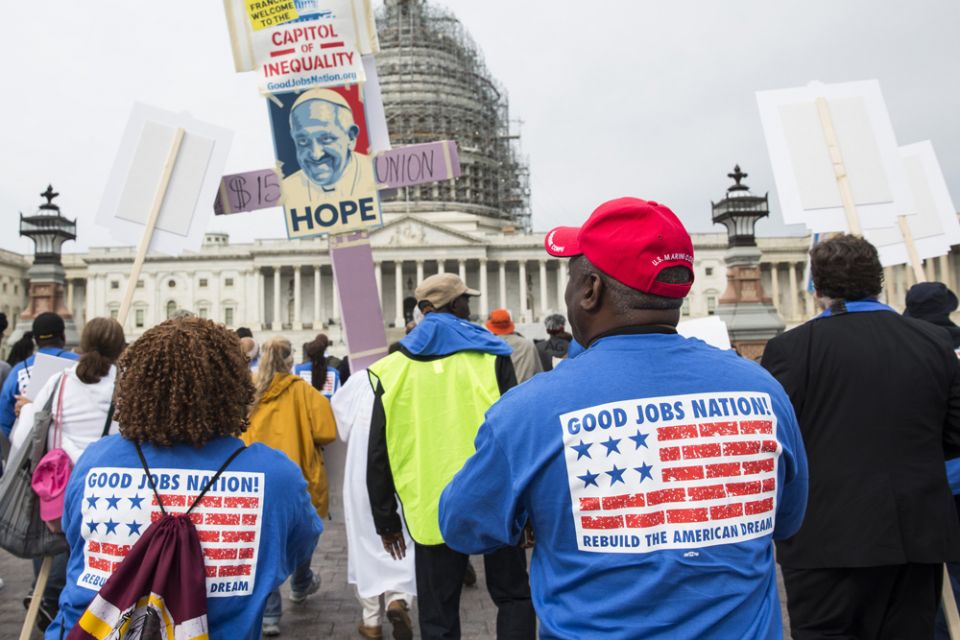 Contract workers from the U.S. Capitol and other federal buildings rally during a strike over wages in Washington Sept. 22, 2015. The group invoked the name of Pope Francis as they demonstrated for higher pay ahead of the pontiff's arrival in the nation's capital. (CNS/Joshua Roberts)

After writing this column for eight years, it finally has a name: Decolonizing Faith and Society. Decolonizing? What does that mean? Haven't we progressed beyond the colonialisms of the past? In short, no, we have not moved beyond colonial ways of thinking and being.

In today's essay I raise the question: are most Americans working to live or living to work?

The question exposes how our economic system systematically prioritizes profits over people and commodifies human labor. As a society, we tend to hide this colonial way of doing and being through the myths we tell ourselves about the American dream, individualism and the patriarchal "self-made man."

Perhaps we have moved beyond formal governmental administrations based upon the colonization of whole cultures and countries. However, the current president and too many Americans seem grotesquely ignorant of the fact that the U.S. maintains a colonial relationship with Puerto Rico and over 300 First American tribal lands.

Drawing upon Catholic social teaching and mystical-prophetic traditions, my essays incessantly question taken-for-granted assumptions of Western modernity, including assumptions of secular salvation, the so-called American dream, and the idea that the U.S. is always making progress toward higher ideals of freedom, equality, and solidarity.

While the popular American story always highlights modern progress it also tends to hide what scholar Walter Mignolo calls The Darker Side of Western Modernity, the multiple ways economic globalization has been built upon genocide of First Peoples, stolen lands, denigration of newly arrived immigrants and slavery. Mignolo demonstrates how the last 500 years of modernity and coloniality depends upon human dispensability and disposability.

Consider the precarious situation of people working to live in the so-called "gig economy." I recently became a driver for one of those ride-hailing companies to supplement my family's income. I explain to people who ask that ride-hailing driving does not even pay a minimum wage. The ride-hailing companies, like Uber and Lyft, do not compensate drivers for the costs of gas or car maintenance, much less provide anything close to a livable wage.

Through this gig, I have gained new insight into what British economist Guy Standing calls The Precariat: The New Dangerous Class. Standing explains that many people are now working to live within incessantly uncertain financial situations. He illustrates how the precariat consists of at least three different groups: people who have lost jobs due to deindustrialization, refugees who are fleeing economic and climate crises, and well-educated elites who have been reduced to various forms of temporary employment (including university graduate student workers and adjunct faculty).

The problem is that more and more people are struggling to make ends meet between multiple temporary jobs or no jobs at all. Indeed, as a ride-hailing driver, I find that I am often moving people between their second and third jobs. The economic vulnerability and uncertainty of the precariat is exacerbated by the fact that the social safety net has been torn to shreds over the past forty years.

As Vox reports, groups like Rideshare Drivers United in Los Angeles, Boston Independent Drivers Guild, and Chicago Rideshare Advocates coordinated strikes against Uber and Lyft in at least a dozen U.S. cities this past May 8. While the economist Lawrence Mishel finds that ride-hailing drivers make less than $12 per hour, I earn as little as $3 per hour even during peak hours (and I maintain the highest rating from riders). For people who need to drive full-time to make ends meet, those are poverty wages.

While Uber paid its CEO $45 million last year, the Business Insider says that it paid its COO even more. Meanwhile, the ride-hailing companies save money by intentionally evading U.S. labor laws. By classifying drivers as independent contractors instead of employees, ride-hailing companies do not pay certain taxes, benefits, overtime or a minimum wage to thousands of drivers. According to U.S. law, self-employed contractors don't enjoy legal rights to form unions and negotiate contracts supposedly extended to full-time employees. I say supposedly because unionization and collective bargaining have been eroding for decades.

As Vox reports, Uber conceded this point in a recent filing with the Securities and Exchange Commission. Discussing "risk factors," Uber states that if they are required to classify drivers as employees that they will incur "significant additional expenses" through "wage and hour laws (including minimum wage, overtime, and meal and rest period requirements), employee benefits, social security contributions, taxes, and penalties."

Even if ride-hailing and other companies paid a minimum wage of $15 per hour, that would be insufficient to meet basic costs of living in many U.S. cities. A recent study by City Harvest found that two in five New York City households, over 2.5 million people, "lack enough income to cover just the necessities."

The same study found that based on the $13 per hour minimum wage in New York, a "single parent would need to work 140 hours per week, 3.5 full-time jobs, to make ends meet." A real family living wage should pay $33 per hour in cities like New York.

The gig economy, economist Mishel explains (see study cited above), is not the future economy. I hope not. Nevertheless, in other economic sectors, when a company like Walmart makes $10 billion in a year and pays starvation wages to its workers, profits rule over people. Or, when insurance companies dictate the level and extent of care for patients over health care professionals, profits rule over people.

Even for economic elites who may be thriving on salaries far above the minimum wage, competition compels many to travel and/or work long hours that severely limit time to care for children and/or elders, much less just exist as a human being. The system demands that we work to live rather than live in ways that sustain planetary biodiversity and communal, mutually collaborative relationships.

While we rightfully lament the fact that President Trump has made over 10,000 false or misleading claims during his term, including that he has not fulfilled his campaign promise to bring back manufacturing jobs, there is a deeper lie that our culture and economic system perpetuates: that our economy serves people over profits.

There are other ways of living. Worker cooperatives and other communal forms of living have proven to be effective in creating and maintaining sustainable, dignified jobs, generating wealth, and promoting community and economic development than companies singularly focused on maximizing profit.

Yet as a society we seem to lack the capacity to even imagine other ways of living. Decolonizing faith and society demand incessant questioning of the taken-for-granted assumptions of the dominant system. Until we question the fundamental assumptions of the system, the current imperative for infinite economic growth will continue to threaten all of life as we know it.

Column | Working to live or living to work?

What Francis would say to Obama: Let workers unionize