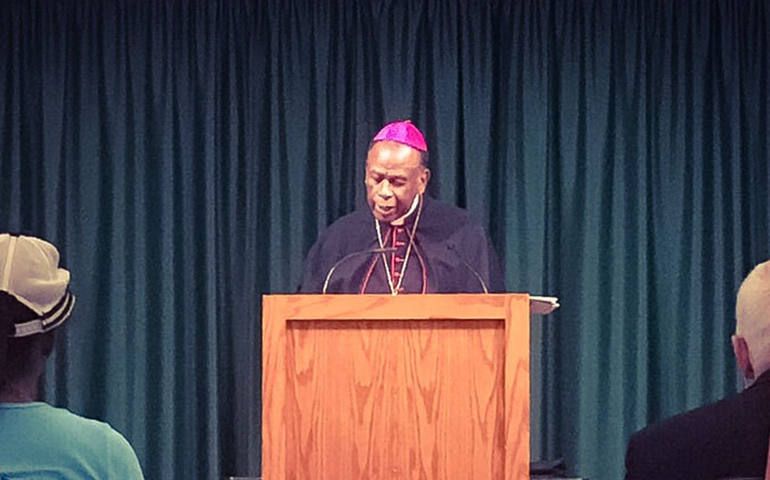 St. Louis — Bishop Edward Braxton of Belleville, Ill., said his background is as an academic, with writings on theological and pastoral topics, and not as an expert in a field related to racial matters.

But he has become an important voice in the Catholic church on the topic, thanks to his writings.

The second pastoral was a basis for his address to the Los Angeles Religious Education Congress and a Lenten reflection at Samford University in Birmingham, Ala., as well as a talk Monday sponsored by the St. Charles Lwanga Center, the Knights and Ladies of Peter Claver, and the Peace and Justice Commission of the St. Louis archdiocese.

After the well-researched yet plain-spoken talk in St. Louis, several people -- black and white, young and old -- lined up before a microphone to add personal experiences of a racial divide or ask questions about how they can play a role in easing it. Applause and reactions from the attendees showed they were engaged with the topic and encouraged by the talk.

Several times Braxton asked people to listen, learn, think, pray and act on the issue of racial equality and harmony.

"Listen to people who thinks differently than you. Tell your children and your children's children. Finally, act. Everyone can do something," he said, recalling Blessed Teresa of Kolkata, who told him, "I must do what I can," when he asked her why she continued her work with the poor and dying.

He hopes to raise consciousness and encourage a civil discourse about the powerful challenges.

The Black Lives Matter movement that sprang from the shooting deaths of black men in confrontations with police and an All Lives Matter response are compatible, Braxton said. However, "it is necessary to acknowledge the legitimacy of the particular concern for the lives of people of color. This is not something Americans recognize," he said.

He gave the example of being in a secure home with plenty to eat and facing a family in dire need of food and shelter.

In the case of the second family, "it is their lives and not mine that are in peril. If you simply say 'All Lives Matter,' there is a danger of falsely implying that every group of Americans is facing the same degree of peril, which then makes it possible to ignore or deny pressing issues like the frequent violent and fatal treatment of African-Americans in the face of minor or suspected misconducts. They seem to be tried, convicted and sentenced to death on the streets."

Braxton, a former auxiliary bishop in St. Louis, said police officers have a very difficult and dangerous job. They deserve respect and gratitude, and their lives matter, he said.

At the same time, he said, "the point of Black Lives Matter is that many in the African-American community face existential threats that must not be ignored."

The bishop encouraged audience members who spoke during the comment period after his talk. He urged a high school student from a nearly all-white suburban parish to visit parishes with diversity, serve on a justice and peace committee and most of all to express discomfort when others are belittling someone who is different from themselves. He told another person not to wait for her priest to gather people together because through her baptism she is the church and is called to share the Gospel. He also urged support for schools that serve children in economically disadvantaged communities.

Braxton cited the unique peril that makes the Black Lives Matter movement relevant. But it should not be silent about the significant number of young African-American males who die at the hands of other African-Americans or alarmingly high number of abortions, he said. He also called for a repudiation of any form of violence against white people, especially police officers.

A recognition must be made that the lives of other vulnerable, marginalized groups in the country also matter, he added.

He praised Elie Wiesel, a Nobel laureate who was a survivor of Nazi death camps, for bringing the word's attention to the horrors of Jewish suffering during the Holocaust as well as being a champion for the human rights of oppressed people around the world.