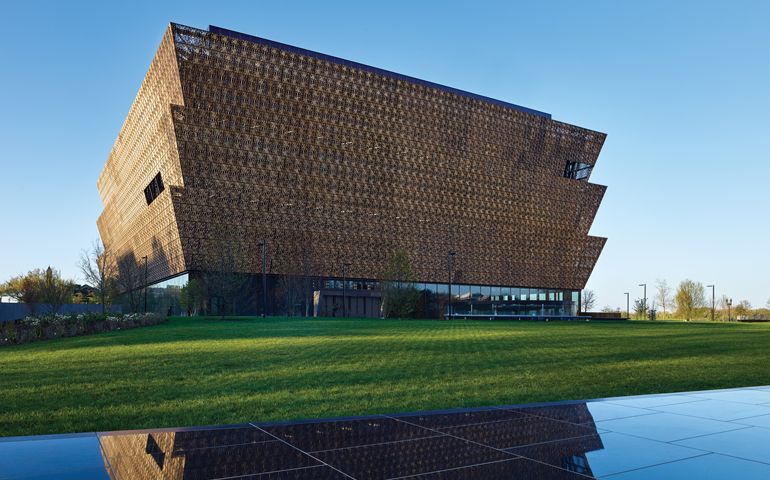 The opening Sept. 24 of the Smithsonian National Museum of African American History and Culture is one of those markers of social progress that justifies hope that our better angels will ultimately prevail. It also signaled, at a time when such assurance seems as essential to human life as a desert oasis, that facts and data and the details of history still matter.

It also is a sign that the struggle for racial justice is a long-haul project that will find expression in successes -- the election twice of the first African-American president -- and in ongoing failure -- the continuing marginalization of minorities, the outrageous incarceration rate of people of color, and the numbing string of young black men, many unarmed, shot and killed by police.

The need for assurance was frighteningly evident in the days just prior to the opening of the museum, when it seemed that "unhinged" had become an epidemic character trait in some political quarters. What other term might apply to the county political operative who, in an extended interview, said with great conviction, "I don't think there was any racism before Obama got elected"?

Perhaps that was a case of forgivable ignorance or exaggeration on the part of a local campaign worker, but it was quickly followed by the illustrious member of Congress from North Carolina, Republican Robert Pittenger, declaring that protesters in Charlotte, angry about the killing of yet another African-American man by police, "hate white people because white people are successful and they're not."

The breathtaking foolishness of those two statements might even be forgivable, or at least dismissed as the work of outliers, if they weren't, instead, the latest offensive assertions in the weirdest and most disturbing campaign season in modern history. The public has had to endure a wave of bigotry and assaults on common decency that seem intent on giving rise to our darkest instincts.

So, coincidental as it might be, a monument to national truth-telling that acknowledges the complexities of history and the often difficult slog of human progress makes its debut at a moment in which easy dualisms and simple answers have taken root in the political conversation. It is too often an ugly and unnecessarily divided conversation propelled and amplified along the slippery avenues of the digital age.

At a time when accountability and simple accuracy are in danger of becoming quaint ideas, there is in the new Museum of African American History and Culture a solidity that cannot be shape-shifted in the anonymity of the ether or by the wearisome drone of talking heads on 24/7 cable channels. In a certain sense, as this new edifice redefines the landscape of the nation's capital city, we are agreeing that we're committed to it and the story it tells.

The story is often powerful, difficult to confront and forces the kind of pondering that is in short supply in the quick-cut age. African-American historian Blair L.M. Kelley was concerned that the museum might go for a certain glitz and overlook the details of life. "But my worries were unfounded," she wrote in a recent Washington Post review of the new museum.

It succeeds, she wrote, "by grappling in an elegant fashion, with the many strands -- sometimes uncomfortable, sometimes uplifting -- of African American history, and how closely they're interwoven with the American experiment from its inception."

She pays the new exhibition highest praise by noting that the stories are told as they should be: "Not an account of black people fitting into American history, but American history told through the black experience."

So often we want the inconvenient intrusions into our national narrative -- the ones that show how we've betrayed our best ideals -- treated as set-asides, compartmentalized as aberrations when too often they are inseparably woven into the fabric of our culture. It is no small irony in this year of political imbalance and wide disdain for the realities of governance that Washington -- and the federal government in the form of the Smithsonian Institution -- would provide the country with a repository for the detailed truth of what many have called our original sin.

The story of America cannot be told apart from the story of racism. So we must pay attention to its latest chapters, the ones unfolding in the streets of Ferguson and Chicago, of Tulsa and Charlotte. We need to read the unfolding story carefully in the protests among professional athletes, in the questions bubbling up among students, in the national conversation we are having about the life-and-death matters of law enforcement.

Resistance to the narrative that is rolling out before us will ultimately provide little comfort. Engaging the narrative by examining our own presumptions about those we perceive as different, examining and understanding the details of a journey that has brought us all so far only to show how great a distance remains, is the only way to banish the outlandish and to set a true course to the future.