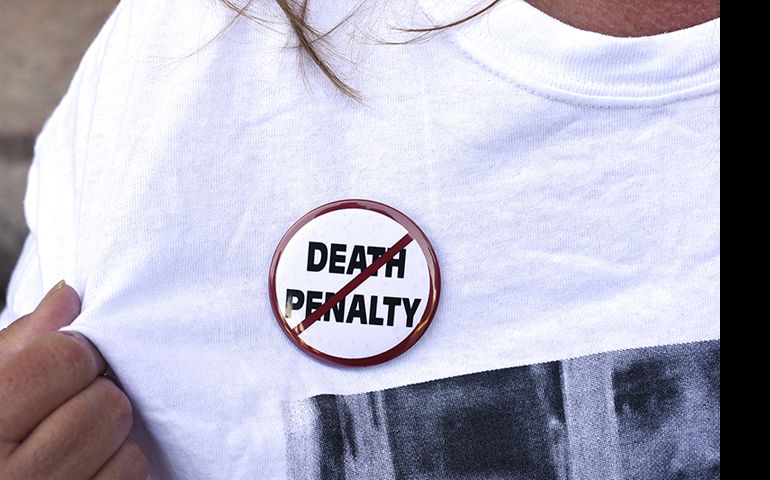 An anti-death penalty button is worn by a demonstrator attending a protest against the scheduled execution of convicted murderer Richard Glossip, at the state Capitol in Oklahoma City on Sept. 15, 2015. (REUTERS/Nick Oxford)

Washington — The largest coalition of U.S. evangelicals has stepped away from its pro-death penalty stance, which it embraced for the past 40 years.

The board of the Washington, D.C.-based National Association of Evangelicals announced Monday (Oct. 19) that evangelicals who both support and oppose the death penalty can legitimately ground their beliefs in Christian ethics.

The decision, made by resolution, reflects a larger societal shift away from the practice, though it does not reverse the earlier support for the death penalty.

“This is a sign of shifting, but not decidedly changing sides, on the death penalty,” said Ed Stetzer, a Southern Baptist and executive director of LifeWay Research, an evangelical research firm.

“A strong majority of evangelicals are still in favor of the death penalty, but that’s moving from an overwhelming majority to a strong one,” Stetzer added. “My guess is that shifting will continue; that’s why they are called trends; they continue.”

In the resolution, the NAE board said:  “Evangelical Christians differ in their beliefs about capital punishment, often citing strong biblical and theological reasons either for the just character of the death penalty in extreme cases or for the sacredness of all life, including the lives of those who perpetrate serious crimes and yet have the potential for repentance and reformation.

“We affirm the conscientious commitment of both streams of Christian ethical thought,” it continues.

The softening of evangelicals’ support for the death penalty is particularly significant in light of their strong support compared with other religious groups. A report from the Public Religion Research Institute from September 2014 found that 59 percent of white evangelical Protestants -- more than any other religious group surveyed -- preferred the death penalty to life in prison with no chance of parole for those convicted of murder.

But nonwhite evangelicals part with their white co-religionists on the issue.

“The NAE’s rhetorical shift on the death penalty is notable because it signals the increasing importance of non-white evangelical Christians,” said Dan Cox, PRRI’s research director.

“Most white evangelical Protestants support capitol punishment, but it is decidedly unpopular among black and Hispanic Protestants,” he said. “The NAE’s shift is an acknowledgement that black, Hispanic and Asian evangelicals are going to play a vital part in the future of evangelical Christianity in the U.S.”

Most U.S. states, 31, allow the death penalty, though the number rejecting it has increased in recent years. The Supreme Court is set to revisit the issue this session, with several death penalty cases on the docket so far. And though none of the cases directly asks the question, two justices -- Ruth Bader Ginsburg and Stephen Breyer -- have challenged the constitutionality of capital punishment.

NAE president Leith Anderson characterized the move in terms of evangelicals’ larger advocacy for respect for life from womb to tomb.

“Life is the gift of God and humans are created in God’s image, and this speaks to that core issue. It’s important because as evangelical Christians but also as American citizens, we want to engage in how our country lives and the laws of our nation.”