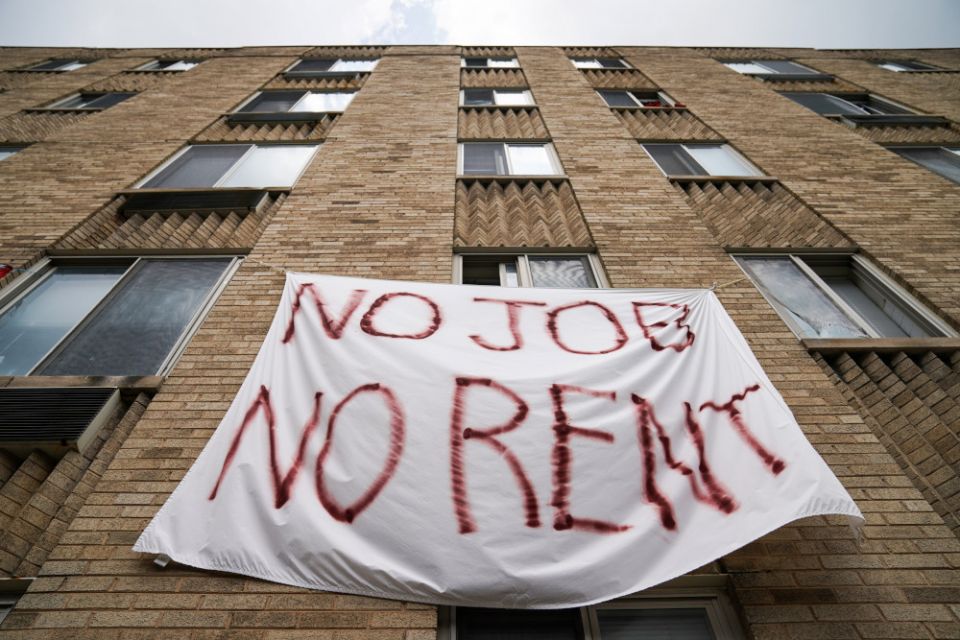 Residents in Washington push for the cancellation of rent Aug. 20, 2020, during the coronavirus pandemic. (CNS/Reuters/Sarah Silbiger)

Windsor Terrace, NY — A moratorium on evictions in the U.S., announced Sept. 1 by President Donald Trump, will keep thousands of Americans in their homes through the end of the year, but it does not cancel rents owed.

Critics say the moratorium only delays a housing catastrophe for a few months. Some favor using federal dollars to help people pay rent and, by extension, help landlords pay mortgages.

Meanwhile, people like Catalina Rojas, 45, a mother of two in Queens, can't think beyond how to pay next month's rent, now that her husband's income is gone.

"My husband died due to COVID," she told The Tablet, diocesan newspaper of Brooklyn. "Losing the head of the household has hurt emotionally and economically."

The Centers for Disease Control and Prevention announced the temporary eviction moratorium to prevent the further spread of COVID-19. Under the order, landlords and property owners are prohibited from evicting certain tenants impacted by COVID-19, or could face high fines.

In addition, people displaced by evictions face more risks of exposure to coronavirus if they retreat to crowded "congregate settings, such as homeless shelters," according to the order.

To get the relief, tenants must not earn more than $99,000 a year, or $198,000 for couples filing a joint tax return. They also must provide a written declaration to landlords stating they've used best efforts to get "all available government assistance," to pay rent; that they have lost substantial household income; and eviction would make them homeless.

But the CDC order expressly does not cancel all rent owed during the pandemic — the cornerstone of the grassroots #CancelRent movement, which protested on Sept. 1 outside the Housing Court for Brooklyn.

Instead, according to the order, tenants must make some payment each month, however small.

The CDC's action results from an executive order President Trump made on Aug. 8. In it, he claimed Congress failed to extend a temporary evictions moratorium that was part of the Coronavirus Aid, Relief and Economic Security (CARES) Act. That moratorium expired July 31.

The president promised to "take all lawful measures to prevent residential evictions and foreclosures resulting from financial hardships caused by COVID-19."

Subsequently, the White House staff announced Sept. 1 that the CDC would administer the moratorium.

"I want to make it unmistakably clear that I'm protecting people from evictions," Trump said.

The president of a national landlord advocacy group said the moratorium would only forestall the problem, which will likely worsen with the piling up of unpaid rents.

"An eviction moratorium will ultimately harm the very people it aims to help," said Doug Bibby, president of the National Multifamily Housing Council, based in Washington.

"A protracted eviction moratorium does nothing to address the financial pressures and obligations of rental property owners," he added in the press release. "Without mortgage forbearance protections and protections from other property-level financial obligations such as property taxes, insurance payments, and utility service, the stability of the entire rental housing sector is thrown into question."

Bibby said a better solution would be "dedicated, long-term funding for rental and unemployment assistance," and he urged the federal government to act accordingly.

Political analyst Brian Browne said the moratorium is a "temporary half measure" that "delays but does not put a stop to evictions."

Browne, an adjunct professor at St. John's University in Queens, is also executive director for university relations and assistant vice president for government relations at the school.

"What is needed," he added, "is a bipartisan deal to provide meaningful rental assistance in the form of rental vouchers or direct payments to landlords. The unemployment crisis, especially in metropolitan areas, is what is driving the housing insecurity crisis."

Browne said the moratorium likely wouldn't win many votes for Trump in November's election. "The reality is if you are facing an eviction, you have more urgent matters to worry about," he said.

Meanwhile, Catalina Rojas continues with her struggle. She said her teenage son endures a heavy burden because he feels responsible for replacing his father's income while mourning his loss.

"With tears in his eyes, he prays to God for strength and help, as he tries to help his mom," Catalina said.

Homemakers of Mercy make sure apartments are ready for homeless