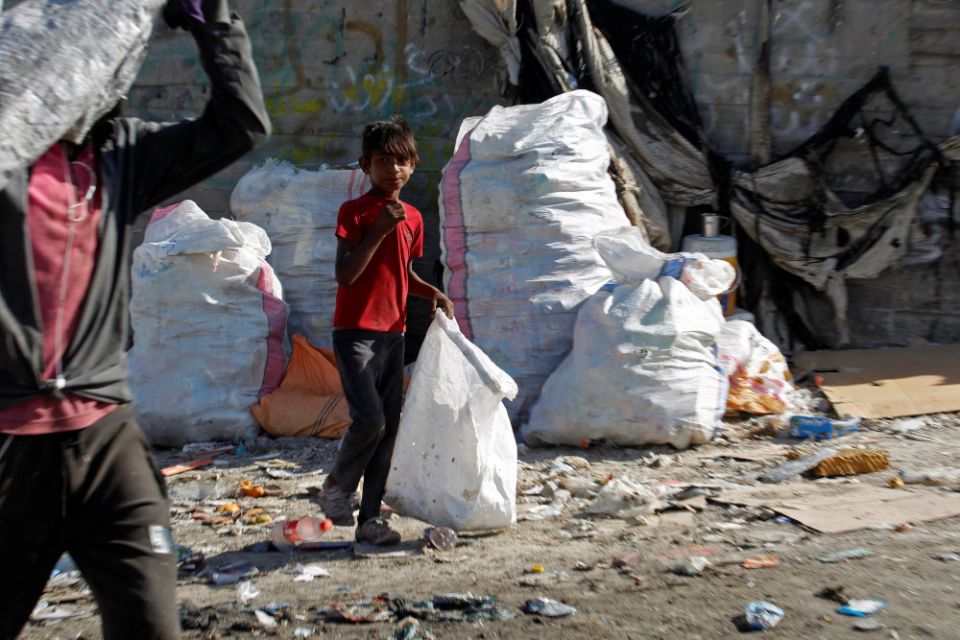 Iraqi boys collect recyclable garbage at a dump in Najaf, Iraq, Oct. 23, 2020. In a Nov. 30 video message, Pope Francis said that social justice for all men and women cannot be achieved if most of the world's wealth is controlled by a small percentage while the rights of others to a dignified life are disregarded. (CNS photo/Alaa Al-Marjani)

Vatican City — Guaranteeing justice for all men and women is not possible while a few people control most of the world's wealth and everyone else's right to a dignified life is disregarded, Pope Francis said.

In a Nov. 30 video message, the pope encouraged judges from North and South America and Africa not to lose sight of "the distressing situation in which a small part of humanity lives in opulence, while an increasing number of people are denied dignity and their most elementary rights are ignored or violated."

"We cannot be disconnected from reality," he said. "This is a reality you must keep in mind."

The judges were taking part in a virtual meeting Nov. 30-Dec. 1 on "Building the New Social Justice." The meeting was sponsored by the Pontifical Academy of Sciences and the Committee of Pan-American Judges for Social Rights and Franciscan Doctrine.

At "such a critical time for all of humanity," the pope said, the virtual meeting to discuss the work of building "a new social justice is, without doubt, excellent news."

Offering a reflection for their discussions, the pope said that building social justice is a "collective work" that must be achieved on a daily basis "because imbalance is a temptation at every minute."

Working toward true social justice must also be done with an "attitude of commitment" that follows "along the path of the good Samaritan" and that is mindful of not falling "into a culture of indifference," he said.

People "must recognize the all-too-frequent temptation to disregard others, especially the weakest," the pope explained. "We have to assume that we have become accustomed to turning a blind eye, to ignoring situations until they hit us directly."

And, he continued, one must not ignore history with all its "struggles, triumphs and defeats."

"Therein lies the blood of those who gave their lives for a full and integrated humanity," he said, as well as the roots of what people are experiencing today.

Pope Francis insisted that true social justice is impossible if the human person is not the center of concern.

"God asks us believers to be God's people, not 'God's elite.' Because those who go the way of 'God's elite' end up in the so-called elitist clericalisms that work for the people, but do nothing with the people, do not feel like a people," the pope said.

Lastly, Pope Francis said that solidarity is essential in the fight against poverty, inequality and unemployment.

Solidarity means "fighting against that culture that can lead to using others, to enslaving others and ends up taking away the dignity of others," the pope said. "Do not forget that solidarity, understood in its deepest sense, is a way of making history."

Justice | Social justice must be founded on care for others, pope tells judges

Newly canonized popes were voices for the voiceless