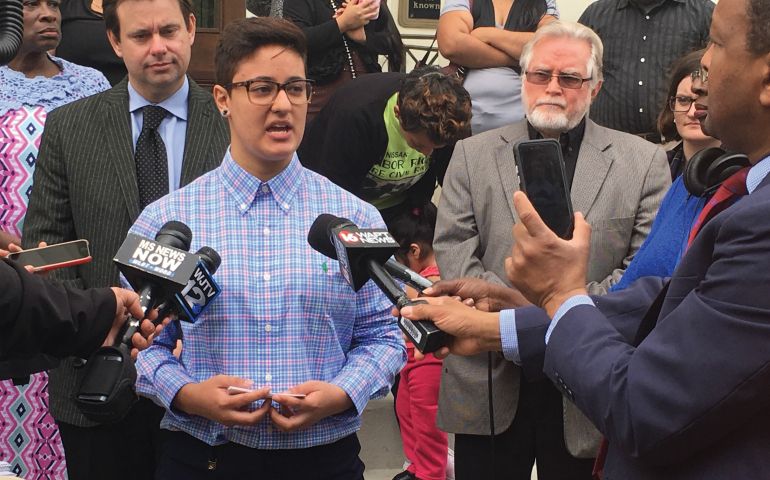 Daniela Vargas, an Argentine native who is a beneficiary of the Deferred Action for Childhood Arrivals program, or DACA, speaks at a March 1 news conference on the steps of the Jackson Police Department in Mississippi. (CNS photo/Tereza Ma, Mississippi Catholic)

They also invited the community at large to attend a forum to discuss the contributions immigrants make to Mississippi and seek dialogue with law enforcement representatives.

Immediately after the news conference, one of the immigrants who spoke was detained by U.S. Immigration and Customs Enforcement agents.

Daniela Vargas is a 22-year-old Argentine native, but America is the only home she has ever known. She was covered under the Deferred Action for Childhood Arrivals program, known as DACA, but those applications have to be renewed every two years. She reapplied late because she had trouble getting together the money for the application, so her coverage had lapsed. The car in which she was riding was pulled over by federal agents as she left the news conference.

This was not her first run-in with ICE. Agents arrested her father and brother at her home earlier this year while she hid in a closet. ICE agents eventually raided the house and detained her for a short time, but released her when she indicated that she had applied for DACA. Her father and brother are awaiting deportation hearings.

"When I was 7 years old, my parents sacrificed everything they had ever known to bring my brother and I into the country to establish a better lifestyle. Both my parents began working in poultry plants where most days the cold was unbearable," she said at the news conference.

"Knowing that they were making this sacrifice for us, I put in all my efforts into my education and my talents. I dream of being a university math professor, but now I am not so sure my dream will develop," Vargas added.

Nathan Elmore, a partner in the firm representing her, said Vargas' case is complicated, but he knows ICE has discretion in its cases and he hopes agents will exercise it.

Vargas, he pointed out, does not fall under the "priority deportations" outlined by the Trump administration. She has no criminal record, she is eligible for a DACA renewal and she was not committing a crime when she was picked up. He planned to request the agency reconsider the case while her renewal was processed.

ICE executed a series of raids in Mississippi Feb. 22, detaining 55 people, according to The Clarion-Ledger daily newspaper. The raids targeted Asian restaurants in Jackson, Flowood, Pearl and Meridian, and officials said they were the result of a yearlong investigation and not part of any new effort to round up unauthorized immigrants.

At the March 1 news conference, attorneys said they cannot find any record of their clients and do not know where they are being detained. Elmore is also representing some of the people being detained in the restaurant raids He said he has been searching the court database to find out if his clients have been charged or appeared before a judge, but even a week after the raid, he can find no record of them anywhere.

Elmore said the current atmosphere in the immigrant community is one of fear, especially among families with children.

"This weekend me and several members of my law firm went to Morton, Mississippi, where we did an outreach event where we talked to people just like Daniela. These folks were scared," he said. "They're worried that 'what if I get picked up, who's going to take care of my child?' That was the number one question that we faced as we talked to these people … and that's a hard question for me to answer for them," he said.

"Often a topic that goes undiscussed (is that) many immigrants who come to the United States — documented or undocumented — do have U.S. citizen children, or perhaps who are not citizens, but who have lived their entire lives here in the United States," she said.

"Forced immigration raids not only puts the children in immediate danger of potentially removing their parents, removing their caregivers from the United States, but it also places them in a constant state of fear, which can re-traumatize them if they have suffered a traumatic past from their home countries," McGowan added.

Redemptorist Fr. Michael McAndrew agreed. He has been advocating for immigrant families across the U.S. for almost three decades. Today, he is part of a Redemptorist community in Greenwood, serving the Hispanic community throughout the Mississippi Delta. He pointed out that deportation is more complicated than it may seem when children are involved.

"Children belong with their parents," he said at the news conference. "Children who grow up under the protection and guidance of their parents are blessed. Life is more difficult when one or both parents is removed from the lives the children.

"Of course, immigration law states that citizen children can remain in this country, but the rights of children must protect more than just the children's right to be here," he continued. "A more important right of the child is to be raised by his or her parents when their parents are not abusive or doing harm to them."

The last speaker, Jim Evans, who is president of the Mississippi Immigrants Rights Alliance, said the Gospel "speaks to these suffering in our midst — not as who they are but as who we are and how we attend to them don't establish who they are, but it makes it clear and reveals who we are."

Judges block Trump's order to exclude some from census count