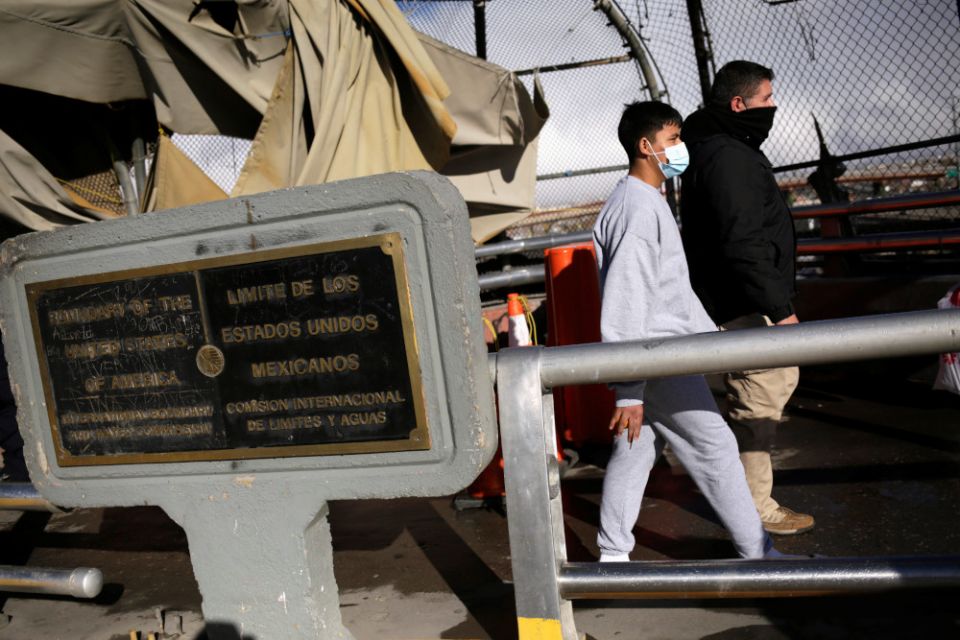 A migrant is deported from the U.S., and into Ciudad Juarez, Mexico, through the Paso del Norte international border bridge Jan. 26. (CNS/Reuters/Jose Luis Gonzalez)

Early on in the pandemic, Monica Ruiz-Caraballo, executive director of Casa San Jose in Pittsburgh, knew responding to COVID-19 was going to look different for her community.

"We work with primarily undocumented people who do not qualify for a stimulus check or unemployment benefits," she explained during a July 14 webinar hosted by the Center for Migration Studies of New York, a non-profit that studies domestic and international immigration issues.

Ruiz-Caraballo said her community at Casa San Jose, a resource center for Latino immigrants opened by the Sisters of St. Joseph of Baden, worked quickly to create a food pantry, raising $1 million dollars and distributing up to $700 to families they had been in contact with.

The July 14 webinar focused on how Catholic organizations serving immigrant communities in the U.S. adapted during Donald Trump's presidential administration and the beginning phases of the coronavirus pandemic.

The migration center was also launching a report it authored on the issue, titled The CRISIS Survey: The Catholic Church's Work with Immigrants in the United States in a Period of Crisis. Resulting from a December 2020-February 2021 survey of nearly 200 individuals working for Catholic institutions in the U.S., the report details how some ministries were able to expand programs, or go remote during the pandemic, and how others struggled to do so.

The report also found that immigrant communities faced difficulties in accessing online services during lockdown periods due to poor internet connection, limited computer access, and a lack of communications technology and training.

Besides Ruiz-Caraballo, other speakers at the July 14 webinar included the report's two authors and Alfonso Lara, director of the Centro San Juan Diego, an official ministry of the Denver Archdiocese that works to promote the common good of the Hispanic community.

Lara noted that much of the country's essential workforce relies on labor from immigrant communities.

"Many of our people are construction workers or domestic workers. They could not stay home or help their kids figure out how to use technology," said Lara.

The migration center report found that Catholic organizations across the country set up resources to mitigate the blow of the pandemic for immigrant communities, but a looming fear of the Trump administration's immigration enforcement policies prevented immigrants from accessing those services.

Don Kerwin, executive director of the Center for Migration Studies and one of the authors of the study, said: "There is a fear of being arrested, detained or deported while trying to access services at Catholic organizations."

Kerwin attributed this level of anxiety and fear to some of the anti-immigrant rhetoric used by Trump.

"There is a fear of being arrested, detained or deported while trying to access services at Catholic organizations."

In addition to anti-immigrant language, Kerwin added that Catholics in this country are not united in efforts towards helping migrants. Kerwin believes this anti-immigrant attitude will continue to make it difficult for Catholic organizations that are working to welcome their neighbor.

Ruiz-Caraballo and Lara agreed that policies such as the Trump administration's now-revoked public charge rule, under which immigration authorities could deny visas based on how likely an immigrant might be to need government support, were harmful to their communities.

In explaining how the presidential administration transition impacted his community, Lara added: "Our citizenship classes were full, people were scared [under Trump], but under this administration, people are hopeful again."

As the webinar came to a close, a new challenge for immigrant and refugee communities was addressed: vaccines. Both Casa San Jose and the Centro San Diego have been offering vaccines against COVID-19, but it has been a struggle.

Lara said that a lot of people in the Spanish-speaking community do not want to get the vaccine because there have not been public awareness campaigns addressed specifically to them. Ruiz-Caraballo emphasized that some immigrants believe they can get deported for getting the vaccine, which she attributes to misinformation about who is eligible to receive it.

As Catholic organizations shift their work towards vaccination efforts, many hope they can also continue new programs that started during COVID-19.

In addition to extending virtual practices created during the pandemic, the Center for Migration Studies also suggested advocating for immigration reform bills like the U.S. Citizenship Act, talking with Catholics who don't agree on immigration, and modeling inclusion as ways to better minister to immigrants and refugees moving forward.