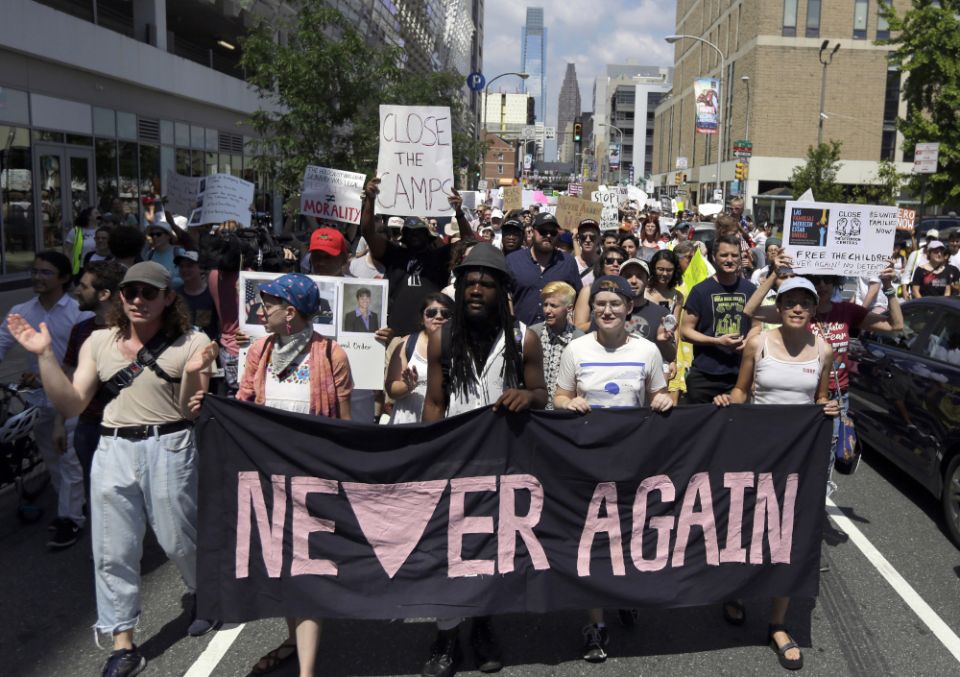 Protesters assembled by a majority Jewish group walk through traffic as they make their way to Independence Mall on July 4, 2019, in Philadelphia. Hundreds gathered during the city's traditional Fourth of July parade to protest the treatment of immigrants and asylum-seekers. (RNS/AP/Jacqueline Larma)

It started with a call on Facebook to demonstrate against the country’s increasingly hostile immigration policies.

Earlier this summer, Serena Adlerstein, a 25-year-old Jewish volunteer for a nonprofit that promotes immigrant rights, asked her Facebook friends: "What if young Jews occupied ICE detention centers and shut them down?"

That question led a couple of hundred Jews and allies to protest on June 30 outside the Immigration and Customs Enforcement detention center in Elizabeth, New Jersey, leading to 36 arrests for blocking the entrance.

Less than 48 hours later came two more demonstrations – one in Boston and another in Providence, Rhode Island. The following day, it was Los Angeles, then Philadelphia, San Francisco and Chicago.

To date, there have been 37 demonstrations, all under the banner of Never Again Action. All have been led by Jewish activists wanting to shut down ICE’s detention of immigrants, which has separated families and crowded them in squalid conditions. On Wednesday, the Trump administration unveiled a regulation that would allow it to indefinitely detain migrant families who cross the border illegally.

For a small, decentralized group of Jewish activists, the spate, size and scale of the protests is breathtaking.

"They are very well trained," said Rabbi Salem Pearce, who spoke at the first Never Again Action in Elizabeth, New Jersey. "They know what to do. And they’ve tapped into a moment where the Jewish community was really paying attention."

State and local police departments, plus the state’s attorney general are investigating. Meanwhile on Tuesday, Never Again Action organized a news conference at which Providence Mayor Jorge Elorza called for shutting down the Wyatt ICE facility and banning all private, for-profit prisons in Rhode Island.

"The bottom line is that the actions of the facility staff do not align with their own claimed mission,” he said, identifying that mission as to “protect the public from people who pose a threat to society."

The success of Never Again Actions has surprised even the founders of the group — an ad hoc collection of social justice organizers, mostly in their 20s and 30s, many of whom were trained by Jewish or immigration advocacy groups.

They built the movement by recognizing the need to partner with immigration advocacy organizations such as Movimiento Cosecha, a group that fights for permanent protection of the 11 million undocumented immigrants, and AMOR, a Rhode Island group that works with immigrants on legal, health and social issues. Most of the money the movement has raised has gone to those groups.

The movement has also tapped into a mantra generations of Jews have grown up hearing from their parents, grandparents and community leaders in reference to the Holocaust: Never again.

"This is an opportunity for us to talk about how we learn from our history in order to prevent it from ever happening in any form," she told CNN’s Jake Tapper.

For many Jews, that link between immigrant detention centers and concentration camps appeared to spark the wave of activism.

"As Jews, we know what concentration camps can lead to," said Lex Rofeberg, a 28-year-old rabbi in training who lives in Providence and has participated in two of the actions. "We understand that if we don’t take actions catastrophic things can happen."

The movement has also benefited from a series of smart organizing principles that allowed it to spread quickly: a website and an online toolkit for would-be activists wanting to target an ICE facility near them.

The toolkit links to a list of ICE detention centers across the country and provides a list of talking points, songs and chants, as well as a set of detailed legal considerations for actions intended to lead to nonviolent arrests.

The tone of actions, the toolkit says, should be modeled after a beloved Harry Potter character, calling it a "Defiant, angry, urgent, Jewish, Molly Weasely moment."

It also lays down a set of ground rules: no violence, verbal or physical; no weapons; no flags of any kind. 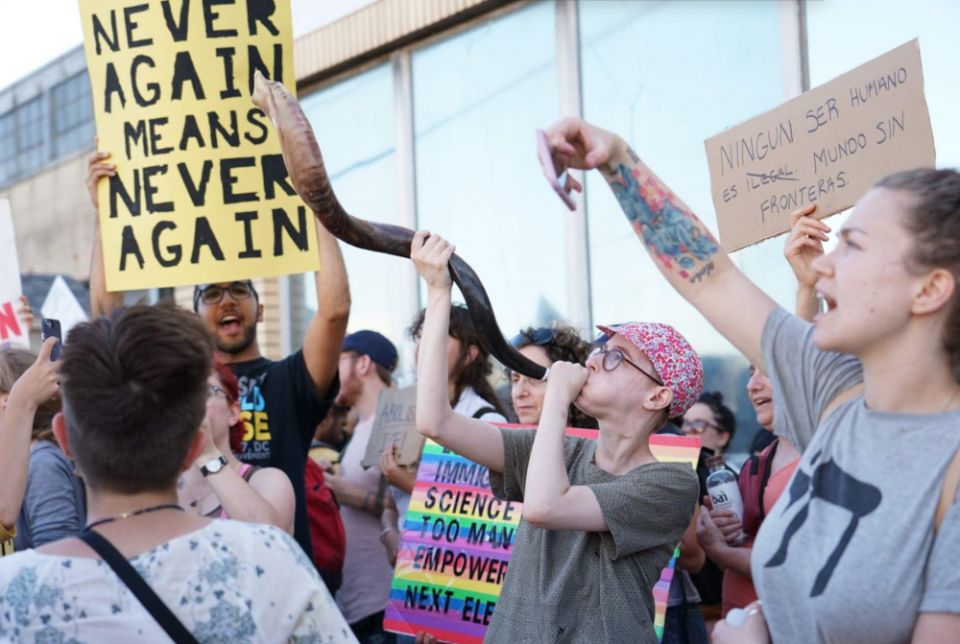 Never Again also provides all local organizers with access to a communications coach, a digital coach and an action coach to help prepare for an action. It keeps in touch with activists through its email list, which has grown to 26,000 subscribers since the website went up last month.

The group’s initial GoFundMe crowdfunding appeal raised $180,000 to help cover the legal fees for those arrested in the Elizabeth, New Jersey, action and to donate to Movimiento Cosecha. In the wake of last week’s Rhode Island ICE melee, organizers quickly sent out two fundraising emails.

"My talit still smells like pepper spray," began one email, referring to the spray the prison used on some Jewish protesters wearing the traditional prayer shawl.

Not yet two months in, the group has yet to formally organize as a nonprofit and has no employees or governing structure.

It also has no specific policy recommendations, aside from a desire to shut down ICE and provide immigrants a legal path to citizenship.

"We see our role to take the energy that has been activated by this outrage around the camps and contextualize it within the larger immigration crisis," said Alyssa Rubin, 25, one of the Never Again Action organizers.

"It’s not our responsibility to put forward a solution," she added. "We see our role as being able to activate the public to help them understand the scale of the problem and support the work that immigrant-led groups have been doing for a long time."

For now, organizers describe their activist group as "scrappy" but say they’re now building a stronger infrastructure. So far they have resisted enlisting with more established Jewish groups to build partnerships.

As its website proclaims and as multiple participants say, the movement’s purpose is simple — it’s to "sound the alarm."