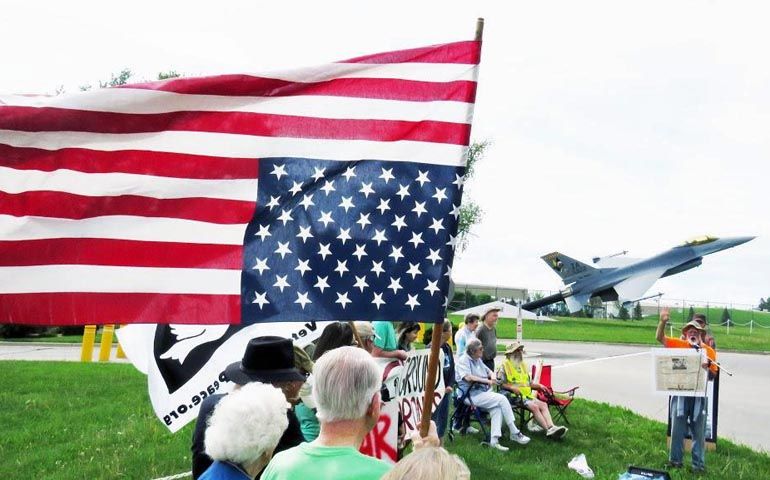 DES MOINES, IOWA — For the second year in a row, the Des Moines Catholic Worker and Veterans for Peace co-sponsored a "Stop the Killing" rally and direct action at the Iowa Air National Guard's Drone Command Center in Des Moines. 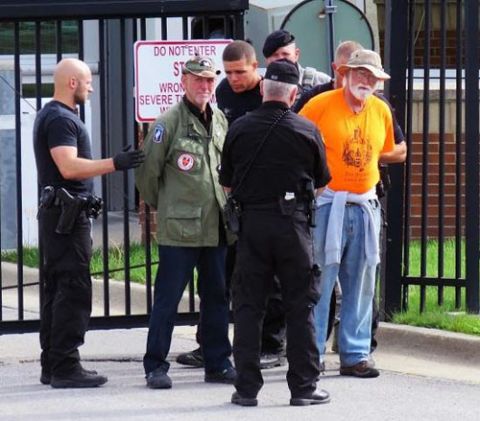 Elliot Adams, left, and Frank Cordaro are arrested for crossing onto the Iowa Air National Guard's Drone Command Center, May 19, in Des Moines, Iowa, during a "Stop the Killing" rally against U.S. drone policy. (Aaron Jorgensen-Briggs)

The rally and action, which took place May 19, on Armed Forces Day, also included Presbyterian Rev. Bob Cook, Methodist Rev. Chet Guinn, and Srs. Elaine and Jeanie Hagedorn, Catholic Sisters of Humility, who all spoke against drone warfare at the event, according to a May 20 press release.

Other speakers included former Veterans for Peace national president Elliot Adams, and Des Moines Catholic Worker Frank Cordaro. Cordaro called on Des Moines Bishop Richard Pates and all priests, pastors and members of religious orders to speak out against drone warfare, especially in light of the U.S. Catholic bishops' 2014 statement criticizing U.S. drone warfare, which Pates signed in his role as head of the bishops' International Justice and Peace Committee.

Adams and Cordaro ended the event by crossing onto the base and were arrested. After spending the night in jail, they pled guilty and were fined and released the following day.

TUCSON, ARIZONA — Scott Warren, a border activist who was charged with harboring undocumented immigrants, is arguing that he should be protected from prosecution because of his religious beliefs, which require that he help all people in distress, the Associated Press reported May 14.

Warren, a volunteer with humanitarian organization No More Deaths, was arrested in January shortly after the organization released video of Border Patrol agents destroying water jugs left for migrants crossing the desert. Border Patrol found Warren in Ajo, Arizona, at a property where two undocumented migrants were staying.

U.S. prosecutors argued that the migrants were never in danger. The judge is expected to reach a decision within a few weeks.

BOSTON — Religious leaders and faith-based groups were part of a coalition that organized a May 17 community delegation to demand accountability from JetBlue on sexual harassment.

According to a May 16 press release, JetBlue's current subcontractor ReadyJet has a history of "health and safety violations, wage theft, illegal threats and unfair labor practices," and recently had a fourth sexual harassment claim filed against it.

The groups planned a #MeToo March at East Boston Memorial Park ahead of the delegation's meeting with JetBlue representatives, and airport workers also planned to attend JetBlue's virtual shareholder meeting May 17 to ask for action against sexual harassment.