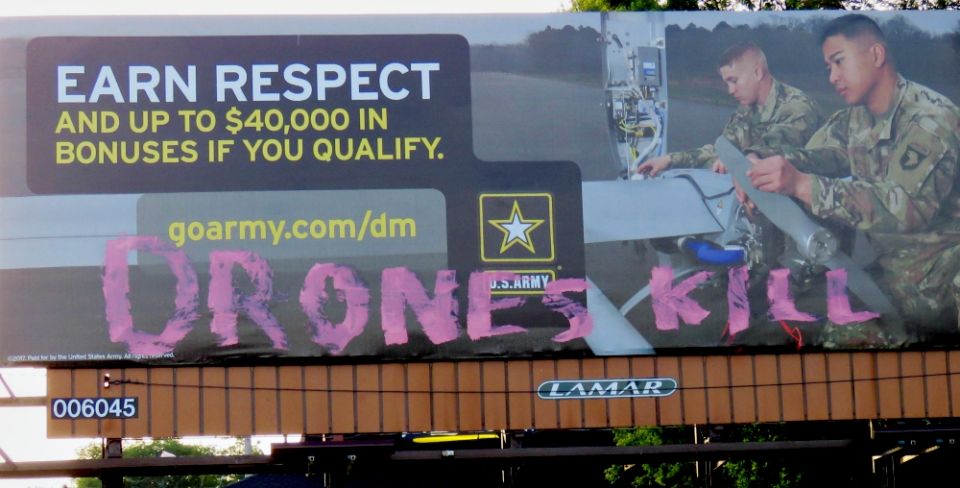 An Army billboard is seen with the words "Drones kill" in the Des Moines, Iowa, area. According to Des Moines Catholic Worker Frank Cordaro, an anonymous "Christian political artist" is targeting Army billboards in an effort to protest the use of drones. (Courtesy of Frank Cordaro)

WASHINGTON — Nine people, including Poor People's Campaign co-chair the Rev. Liz Theoharis and other members of the clergy, were arrested June 11 for praying on the steps of the Supreme Court. The group was demonstrating to draw attention to the court's Husted v. A. Philip Randolph Institute decision, which they say supports voter suppression, and its upcoming Janus v. AFSCME Council 31 decision, which will affect the strength of unions.

Hundreds more were arrested around the country at Poor People's Campaign actions the same day, including more than 100 people arrested on the street in front of the Supreme Court. Campaign co-chair the Rev. William Barber was part of the group and has already been released.

According to a press release, as of the morning of June 12, the nine people arrested on the steps were still being detained and were scheduled to be arraigned at 1 p.m. Eastern time.

In addition to Theoharis, the group included:

DENVER — Regis University in Denver will host a June 17-18 gathering of parishioners and parish ministers who are seeking to improve social justice engagement in Jesuit parishes.

The Jesuit Parish Justice Summit, sponsored by the Ignatian Solidarity Network, seeks to provide an opportunity for participants to build connections within the Jesuit network as they share best practices and ideas about how to "build parish communities with vibrant faith-justice engagement" in the Ignatian tradition.

CHICAGO — Su Casa Catholic Worker in Chicago hosted its annual immigration Mass, potluck and discussion June 10, just a week before the house of hospitality for migrant families closes for more than a month to do state-mandated repairs on the building.

"It's awkward, closing for such a big project in this very urgent moment for sanctuary. We've turned down at least a dozen, probably close to two dozen, families for want of volunteers (hard to attract and retain volunteers without housing) or stability," Catholic Worker Maria Bergh wrote in an email to NCR.

The Mass included a discussion on the history and current reality of immigration led by DePaul University professor Craig Mousin.

NEW YORK — For the 10th year in a row, Pray for Peace is sponsoring a series of walks to raise awareness and encourage prayer for peace around the world. The main walk this year will take place June 23-Aug. 4 and will travel from New York City to Boston, although participants are free to join for as little as a mile or two of the route.

The group is especially emphasizing the walk from Grand Central Station to Yankee Stadium June 30 for a Yankees vs. Red Sox game. Pray for Peace founder Al Forte told NCR the group will stop at several churches that day, including St. Patrick's Cathedral in New York.

DES MOINES, IOWA — An anonymous person whom Des Moines Catholic Worker Frank Cordaro described as a "Christian political artist" is targeting Army billboards in the Des Moines area in an effort to protest the use of drones.

On June 10, someone spray-painted "No respect" on a billboard that originally read "Earn Respect," while the words "Drones kill" had been added to an Army recruitment billboard at the beginning of the month.

"As long as Iowa continues to accept being part of an active war zone through the Drone Command Center, there can be 'No Respect' for serving in the military in the state of Iowa. Our Iowa Drone Command Center connects Iowa to war crimes committed every day," the anonymous person said in a statement sent to Cordaro, which Cordaro sent to Channel 13 news.