Those who want a break from the debates over whether divorced and remarried Catholics should receive Communion could consider marriage issues from another angle: the challenges social structures impose on the stability of couples and families and what the church can do about it.

"Divorce is so much more prevalent among people with less education and less money," said Julie Hanlon Rubio, a professor of Christian ethics at St. Louis University. "That's not a virtue issue; it's just easier to maintain a marriage and have a family when you have money and everything that comes with money."

The typical dichotomy between a liberal viewpoint that poverty leads to reductions in the rate of marriage and a conservative theory that promotes the reverse idea, that a decline in marriage fuels poverty, is frustrating for Rubio, who said research shows it works both ways.

"Marriage is ... not simply an intrinsic good, but actually helps people have stable lives and all the good outcomes that come with that," said Rubio, who serves on the board of the National Catholic Reporter. "But it's also true that social structures impact people's ability to enter into and sustain that structure."

And changes in culture do not affect all groups in the same way. For instance, W. Bradford Wilcox, director of the National Marriage Project at the University of Virginia, cites the sexual revolution and the rise of "individual expressivism" — putting personal welfare and desires before that of family members — as major causes of marriage declines.

"Those two cultural shifts have made marriage less necessary, less important, less attractive and less binding for Americans," Wilcox said in an interview. "But the impact, the fallout, has been more for working-class and poor Americans in part because it's interacted with ... economic factors."

Of particular concern to several researchers is the lack of men who are able to contribute to supporting a family, brought on by declines in the number of steady, well-paying blue-collar jobs available for those without a college education.

Not only are working-class and poor men with no access to quality, stable employment less attractive partners, but those who do get married "are more likely to experience economic insecurity and instability" that can cause "stress in the marriage and divorce," Wilcox said.

June Carbone, a University of Minnesota Law School professor who has written books on marriage and family, cites research that shows a higher rate of abusive behavior and a lower rate of helping with housework for men who have lost their jobs compared with those who have full-time jobs.

Women who forego marriage might be recognizing that "if you bring home the bacon, cook it, and don't have dominant power," marriage is more of a drain on resources than a source of emotional or financial support, she said recently during a talk in Kansas City, Missouri.

This explains why "the college-educated middle class that embraced the sexual revolution is now leading the way back into marriage," while poor and working-class Americans are getting married less often, Carbone wrote in a blog post.

Catholics have several reasons to be invested in solving economic issues that affect marriage.

"Catholic social teaching has a longstanding concern with the welfare of the worker and the dignity of work, and I think we can marry those longstanding concerns (pun intended) with Catholic interest in the family itself and in marriage as both a sacrament and an important way of living out a Catholic life," Wilcox said.

Of course, deciding what exactly Catholics should do to help workers is more complicated.

Pope Francis recognized in his apostolic exhortation on "the joy of love," Amoris Laetitia, that "the suffering created by unemployment and the lack of steady work" can "take its toll on the serenity of family life" and that a lack of affordable housing, "today's fast pace of life, stress and the organization of society and labor" can make it difficult to commit to a permanent relationship.

However, the pope did not elaborate on the church's response to those issues, Rubio said, leaving it "up to us to think about what that looks like on the ground."

Wilcox suggests that people advocate for increasing wage subsidies for lower-income workers, increasing the child tax credit and extending it to payroll taxes and eliminating policies that make marriage a disadvantage in programs such as Medicaid and food stamps.

While some economic policies might be controversial, Rubio said all Catholics could find common ground supporting families suffering economic challenges on a more local level.

Family life ministry "in a parish where a lot of people are facing economic challenges" may be different from ministry in a wealthier parish, she added.

In her research, Rubio has studied supportive structures that mostly immigrant Catholic parishes offered in the early 20th century, such as burial societies, loans, and help with food and employment. These are ideas she thinks modern parishes should consider reintroducing.

Catholic institutions could support marriage and family by allowing employees more generous maternity and paternity leave and searching for creative ways to offer free or low-cost day care for working parents, suggested Jana Bennett, a theology professor at the University of Dayton. 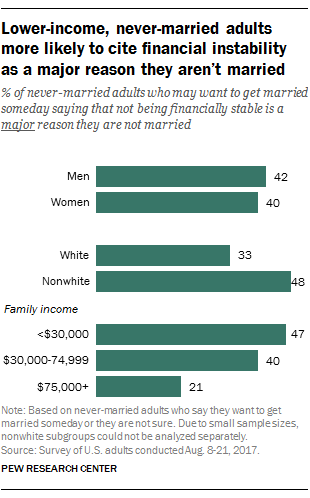 Bennett worried that if economic conditions continue to make it difficult for some people to marry, it "might fuel a culture" where, even if economic equality improved, "marriage still wouldn't matter for a certain sector of people."

However, she does not think Americans have given up on marriage yet. Carbone and Rubio agreed, saying it is still the ideal for the majority of Americans.

"There's a lot of positivity around marriage," Rubio said. "But it's also true that it's harder culturally for us to articulate an argument about why it makes sense to stay with somebody when it gets hard."

Francis makes a strong case for staying with someone "over the long haul" in Amoris Laetitia, Rubio said.

But the church's message in favor of stable marriages may not be conveyed to all groups equally, Wilcox said.

"More-educated Catholics are more likely to attend Mass compared to less-educated Catholics," he said, partially because the church focuses young adult education and ministry on college students while "there's no equivalent support available to young adults who are not attending college."

"The church could do more to reach out in its ministry and its message to working-class and poor Americans to try to get more people in the pews at any given Sunday and involved in the church more broadly," Wilcox said. "That would be helpful in addressing this class divide in American family life."

A version of this story appeared in the print issue.

UISG's new president speaks on the importance of embracing vulnerability

When is enough enough?

Your thoughts on being spiritual but not religious

Pennsylvania bishops should speak out about Mastriano's Christian nationalism

How does the vow of poverty shape a sister's public policy work?

Pope Francis says he wants all annulments to be free