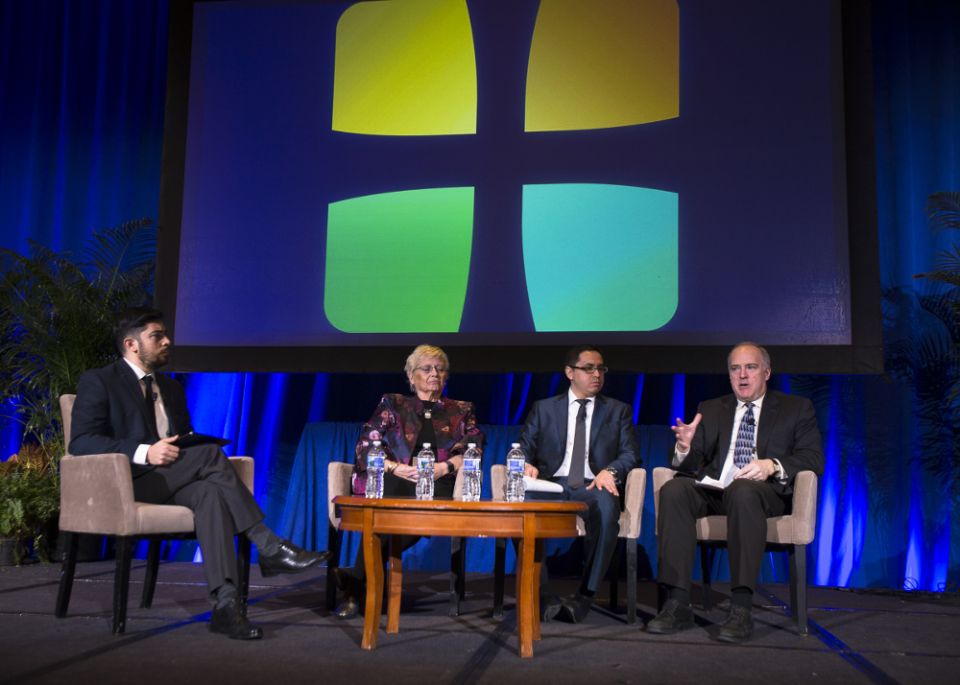 Washington — The need to seek justice and reconciliation has become one of the more intriguing concepts not only with personal dealings but on the world stage as well.

In some areas of civic life it is sorely needed, according to Javier Bustamante, director of the Center for Cultural Engagement at The Catholic University of America, Washington.

"We have a population that does not recognize its own history" and instead has come to "shouting buzzwords" at each other over immigration, Bustamante said during a Feb. 4 panel discussion at the Catholic Social Ministry Gathering in Washington.

"In the Catholic Church, we used to have national churches so we could transition immigrant populations. Now we have shared parishes, and that seems problematic and that creates division and that creates problems," Bustamante said, adding that today's Catholics complain, "They're not learning English" — except, he said, that such also was the case in generations past.

"They're coming to the United States to breathe free, that's true, but they also are fleeing a bad situation," Bustamante said. "They don't need to hear, 'You're not coming the right way.' "

Reconciliation is one of the boldest trends emerging on the international stage as countries have moved from dictatorship to democracy, said Daniel Philpott, associate professor of political science and peace studies at the University of Notre Dame.

He cited truth commissions in 40 nations, with South Africa's perhaps the most visible. "It's the great age of apology," Philpott added.

Janine Geske, a former Wisconsin Supreme Court justice who later became director of the restorative justice initiative at Marquette University Law School in Milwaukee, said: "From my experience in working in restorative justice, people need to hear each other's stories."

Through restorative justice, Geske said, fundamental questions can be asked and answered: "Who was harmed? What was that harm? How do we — and 'we' can be a lot of different groups — go about in repairing the harm?" The process, she added, "doesn't focus on the offender, it doesn't focus on our systems. It focuses on the humanity of the relationship between people."

There are "communities that are going to need to be restored if they're going to live together again," Philpott said. He took the example of Guatemala, which was subject to a 30-year war waged by the government against its indigenous people.

"You had a national-level truth commission informed by the human rights community and so forth," he said. "But the church said, 'That's not enough.' They wanted something more personal. So they organized teams of volunteers who went out into the villages, took the testimony of victims and sought to give them psychological consoling support. Often, they staged memorials to remember their loved ones and the dead."

"It's also important that we talk about our schools, our universities," Bustamante said. "I've seen a lot of dioceses become very creative in bringing the children of immigrants to their schools," he added, with the schools calculating the numbers to make it work. Every time he sees a Catholic school close, though, he says to himself: "That's another school that's not going to help immigrant children like the previous generation did."

Bustamante praised Georgetown University in Washington, which hired a person to work full time with its students who are in the U.S. without documents, and Trinity Washington University and Loyola Marymount University in Los Angeles, both of which have arranged financial support for students eligible for the Deferred Action for Childhood Arrival program, known as DACA.

Forgiveness is an admirable deed, but Geske said the clergy sex abuse that emerged anew last year serves as "a clear example of why 'just forgive them' just doesn't work. Bringing the victim, the offender, the family members and others into a circle is not an instant thing," she cautioned. Once in a circle, one question that must be addressed, she said, is "how have you been impacted by what's happened?"