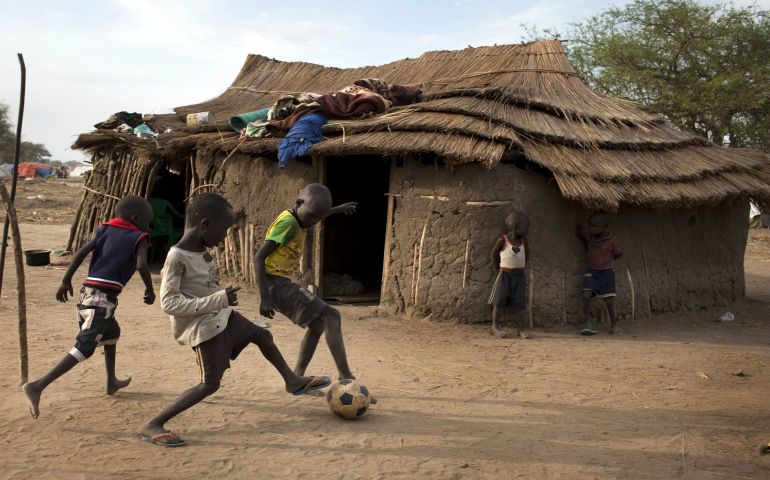 Children play soccer in 2014 at a camp for displaced people in Minkamman, South Sudan. Pax Christi International, the Catholic peace movement, said it will build up young people to contribute to peace and justice in Africa, noting that children are the continent's greatest resource. (CNS photo/Jim Lopez, EPA)

Washington — A quiet movement is underway to reaffirm the central role of active nonviolence practiced by Jesus, as told in the Gospels, and to bring that teaching to a new generation of Catholics.

Initiated by Pax Christi International, the global Catholic peace movement founded after World War II to reconcile French and German citizens, the effort and its promoters ultimately hope to see widespread use of nonviolent responses to aggression.

As part of the effort, Pax Christi International has invited the Catholic Church to rethink its stance on the just-war theory that is meant to guide responses to international conflicts.

Marie Dennis, Pax Christi International co-president, said the time has come for the church to reclaim nonviolence as a core tenet of church life.

"One of the big tasks, I believe, is reshaping people's understanding of what active nonviolence is so that when you talk about it, people recognize it's different from pacifism, that it's a different commitment, and that it's not passive and that it's not only civil resistance or crossing a line," Dennis told Catholic News Service.

Supporters of the effort know the work of integrating active nonviolence into daily life and international affairs will not come overnight, but they are hoping to get people to see the practice as morally imperative in a conflict-filled world.

The two-year-long effort has gotten notice from the Vatican, particularly Cardinal Peter Turkson, prefect of the Dicastery for Promoting Integral Human Development. The Vatican's Pontifical Council for Justice and Peace, now one of the dicastery's offices, co-sponsored a three-day meeting in April in Rome after being approached by Pax Christi International to discuss the church recommitting to Gospel nonviolence.

The meeting — attended by more than 80 representatives of Pax Christi chapters, practitioners and educators of nonviolence, and people living in global conflict zones — produced a statement appealing to the Catholic Church to support "creative and active nonviolence against all forms of violence."

"The time has come for our church to be a living witness and to invest far greater human and financial resources in promoting a spirituality and practice of active nonviolence and in forming and training our Catholic communities in effective nonviolent practices. In all of this, Jesus is our inspiration and model," said the statement that participants released as the meeting ended.

Nonviolence is an appropriate response for the church to embrace, said Precious Blood Father Felix Mushobozi, a meeting participant. He is executive secretary of Justice, Peace and Integrity of Creation for the Commission of the Union of Superior Generals and the International Union of Superior Generals of men and women's religious institutes of the Catholic Church in Rome.

"For us it is important because really the news we are receiving from all the parts of the world, people are tired of war. The Catholic Church needs to take responsibility in trying to change this scenario," Mushobozi said.

The priest's office has been collecting stories from men and women religious around the world that illustrate positive outcomes from nonviolent action with plans to share them with the dicastery.

"It's not that we are going to end war tomorrow, but I think the intention was to at least get the official Catholic teaching to embrace active nonviolence instead of the just-war theory. Our focus was not just on just-war theory, but on Gospel nonviolence," he said.

The just-war theory pertains to the justification of how and why wars are fought. It emerged 1,600 years ago in a letter from St. Augustine to Boniface, a leader of Roman forces in northern Africa that were preparing for an attack by barbarian "vandals" from Europe.

Turkson participated in the meeting. He told CNS during the U.S. Regional World Meeting of Popular Movements in mid-February that church leaders are reviewing "how the church has formulated issues of just war and just peace."

"We recognize our discussion ... will continue for a while," he said.

Judy Coode, Catholic Nonviolence Initiative coordinator, said engagement with the Vatican will continue with the hope of "unpacking Catholic teaching around nonviolence in possibly a more formal way."

Initiative supporters were pleased to hear Pope Francis address the role of nonviolence in daily life in his World Day of Peace message of Jan. 1.

In his opening, Pope Francis urged people, especially in "situations of conflict," to "make active nonviolence our way of life."

He said that being a "true" follower of Jesus "includes embracing his teaching about nonviolence." The pope decried human violence in all forms and called for nonviolence to "become the hallmark of our decisions, our relationships and our actions, and indeed of political life in all its forms."

Two longtime nonviolence advocates also attended the meeting, offering stories about their experiences teaching people about initiatives in their homelands.

Jasmin Nario Galace, executive director of the Center for Peace Education at Miriam College in Quezon City, Philippines, has coordinated a letter-writing program for 17 years among Catholic and Muslim students. At the end of each school year, the Muslim students from Mindanao travel to Manila to meet their pen pals. She called the effort a "people-to-people peace process" that challenges the biases people have.

Galace has distributed the statement that emerged from the Rome meeting to the Catholic Educational Association for the Philippines and urged clergy and women religious to endorse it. Archbishop Antonio Ledesma of Cagayan de Oro is among those who have signed it, she said.

"(Nonviolence) is not just a tool. It's a philosophy. It's a way of life. We are teaching people to be non-harming," Galace said.

"You look at the Catechism of the Catholic Church, preaching the Gospel is preaching peace. It's no different because you're preaching for people to live in dignity," said Kimau, who founded the Horn of Africa Grassroots Peace Forum and works with communities in Marsabit, near the border with Ethiopia.

During her time in the region, Kimau has seen young people who grew up with disdain for peers in other groups now developing friendships. "We saw we needed to treat each other as human beings, understand each other, talk to each other," she said.

Kimau also convenes adult community leaders to train them in active nonviolence. They then return to their communities to teach others. Now, she said, "it would be very hard to allow somebody's friend to be killed by the other."

"People need to lead change, people spreading the gospel of nonviolence," Kimau told CNS. "There is a need for the development of people so they can spread this message. It takes time. It's not a one-day or one-year project."

The only way to overcome violence is love

A Baltimorean's reflections on the Baltimore riots

Attacks in Brussels: They nailed us