by Heidi Schlumpf
Justice
This article appears in the A Nation Under Trump feature series. View the full series. 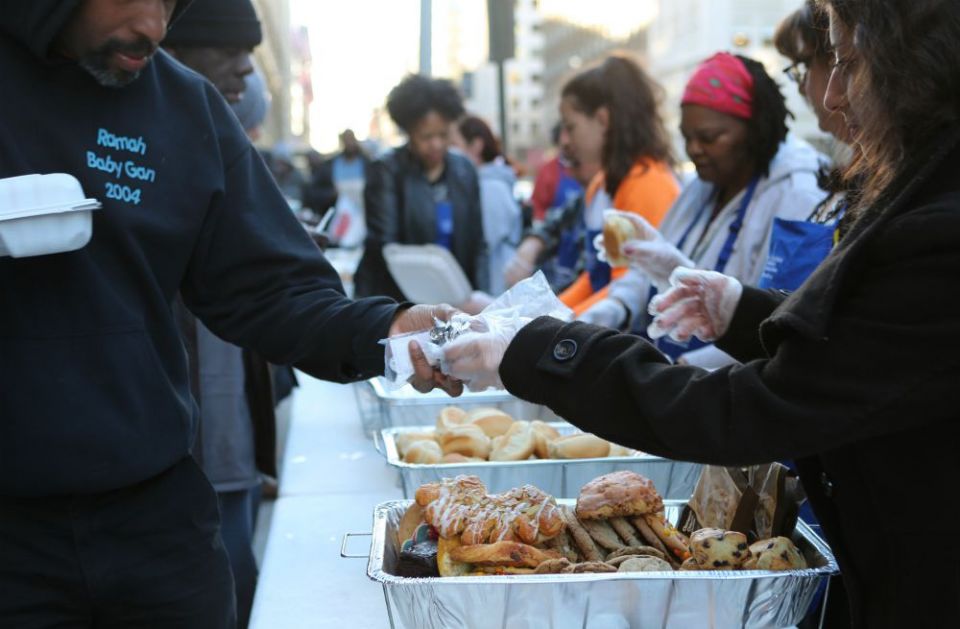 In the year since Donald Trump was elected U.S. president, Catholic Charities has seen a small decrease in the number of people served at its food pantries, medical and legal clinics, domestic violence shelters, afterschool programs and senior centers. This good news mirrors overall dips in poverty and hunger, as the U.S. economy continues to recover from the 2008 recession.

Now for the bad news: The wealthy have recovered more quickly than poor and middle-class Americans, leading to widening income inequality; more Americans still face food insecurity than before the recession; some workers have dropped out of the labor force altogether; and decades-long income and wage stagnation persists, leaving more than 40 million Americans — more than one in 10 — in poverty.

"The need is still there," says Lucas Swanepoel, senior director of government affairs for Catholic Charities USA. "We still see a dramatic divergence between 'the haves' and those who have fallen behind."

Advocates for the poor, including Catholic ones, have had to play defense this past year, fighting proposals from the Trump administration and Republican Congress to cut social safety net programs, such as the Affordable Care Act (ACA), Medicaid, food stamps and affordable housing.

"It's all hands on deck," said John Carr, director of the Initiative on Catholic Social Thought and Public Life at Georgetown University, who nonetheless sees the successful stopping of such cuts, so far, as evidence that poverty issues have gained some traction in the first year of the Trump presidency.

Continuing a "Circle of Protection" begun in 2010, Catholic and other Christian organizations — including some evangelicals in the Salvation Army and National Association of Evangelicals — have successfully fought proposals that hurt the poor, as have everyday Americans who have gotten more politically involved this past year.

Christian leaders — including the U.S. bishops — have spoken with "a unified voice," said the Rev. David Beckmann, president of Bread for the World, a hunger advocacy organization, and chair of the Circle of Protection, an alliance of Christian leaders focused on poverty issues.

"There's this rock solid consensus that Congress should not cut programs for poor people in this country or around the world," Beckman said.

Yet, despite campaigning as the champion of blue-collar working people who are suffering economically, Trump has proposed tax reforms aimed to benefit the ultra-wealthy, at the expense of programs for lower and middle-income Americans.

Such "trickle down" economics — the theory that economic growth will benefit all, which has guided economic policy for more than three decades — has only resulted in greater income inequality, say economists.

"Since the 1970s, the economic evidence is clear: economic growth does not trickle down to the poor," said Charles M.A. Clark, professor of economics at St. John's University and senior fellow at its Vincentian Center for Church and Society.

That hurts not only the poor, but the economy overall, because money does not circulate through wages and spending, he said. Instead, businesses and investors are holding on to cash or investing it in risky ventures to get a return.

"That's not sustainable," Clark said. "We need to dramatically raise taxes on the rich so their excessive wealth doesn't distort the whole economy. It would be wise to use that money for programs for people on the bottom."

Instead, the Trump administration has proposed cutting taxes for the wealthiest Americans, while middle-income earners may even experience tax increases, according to Alí R. Bustamante, an economic policy fellow at the Jesuit Social Research Institute at Loyola University in New Orleans.

The resulting decline in revenue would most likely trigger scaling back of safety net programs for the poor, shifting the costs for those programs to the states, which cannot afford them. In addition, the shelving of the rule that extended overtime pay to millions of workers is a de facto pay cut for many, Bustamante said.

"Instead of promoting wealth for working-class families and the middle class, [Trump policies are] redistributing that away from them and toward an already entrenched wealthy class," he said.

This will only exacerbate the "American nightmare" of "not living up to what everyone was told was the American dream: the opportunity for your kids to get ahead," said Social Service Sr. Simone Campbell, executive director of Network, a Catholic social justice lobby.

That economic stress on families — especially white, working-class ones — was behind the rise of both Trump and Bernie Sanders, who failed to gain the Democratic nomination, according to analyses of the 2017 election.

Many of those who voted for Trump and Sanders feel left behind, Clark believes. "If you could just get those two groups to line up around their economic interests, you would have a majority," he said.

But Trump continues to stir up blame and resentment against immigrants and people of color, while simultaneously diverting the political discussion away from economic issues to ones involving protesting NFL players or Gold Star widows, for example.

Meanwhile, "most of the folks at the bottom have to work two to three jobs and have very little time to speak up," says Campbell, noting that the typical recipient of social safety net program is employed and more likely to be suburban or rural, not living in an urban ghetto.

Justice, not charity, is the answer, poverty activists say, and they have their work cut out for them in Year 2 of a Trump administration.

Carr would like to see a move from defense to offense, making poverty a moral and policy priority. "But we've had to spend all our energies trying not to lose key elements of the safety net, which are lifelines to the poor," he said. "Instead of moving forward, we've been trying to hold our own." 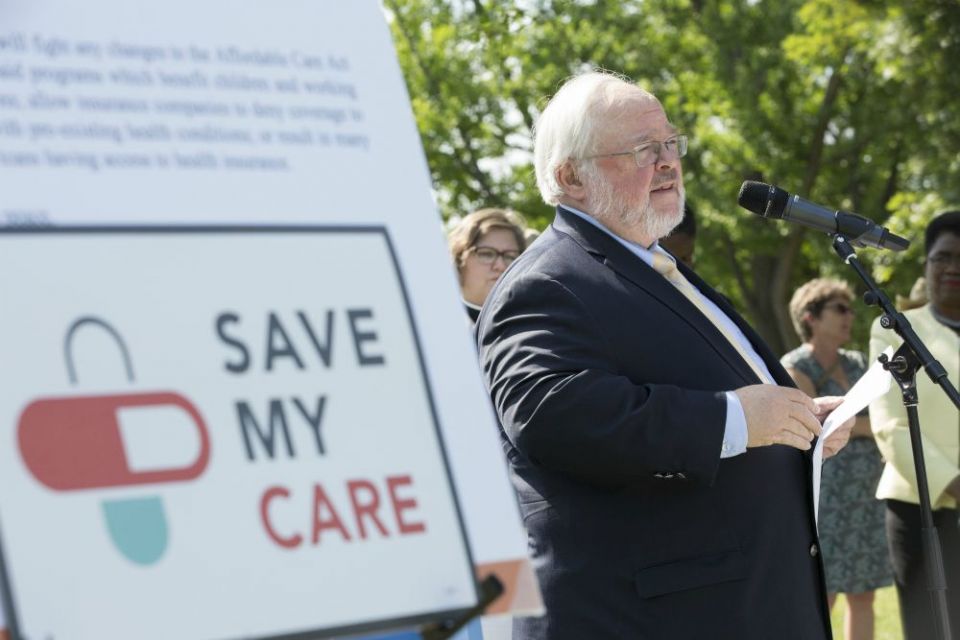 John Carr, director of the Initiative on Catholic Social Thought and Public Life at Georgetown University, speaks during a 23-hour prayer vigil June 29 on Capitol Hill in Washington. The vigil focused on preserving Medicaid and was organized after the Senate delayed a vote on the Better Care Reconciliation Act, its health care reform bill. (CNS/Jaclyn Lippelmann)

Still, the religious community's success in stopping repeals of the Affordable Care Act that included drastic cuts to health care for the poor is a success, Carr said, praising the U.S. bishops' support. "For them to say repealing the ACA, which they did not support, would hurt the poor is a very strong signal," he said.

The activism that stopped the ACA repeal must continue, said Campbell, who urges citizens to speak up and demand responses from their elected officials. "We have to stay engaged. It's the only way we're going to make a difference," she said. "Citizenship is hard work. … We Catholics who believe in Catholic social teaching need to stand up and demand it."

One strategy that has worked is reminding members of Congress of past bipartisan successes and why they came to Washington. "I can't remember anyone who lost a race because they helped feed the hungry or shelter the homeless," said Carr, who tells lawmakers that Pope Francis' approval rating of about 70 percent is substantially higher than Congress' 10 percent.

A matter of faith

Some elected officials are working to preserve programs that help the poor. For Rep. Rosa DeLauro, a Democrat from Connecticut, her Catholic faith underlies her political beliefs, which include opposition to the Republican budget proposal, which she calls "a massive assault on the social safety net."

"These are programs that are effectively lifting people out of poverty, and we have an administration that's turning its back on folks and driving them deeper into poverty," DeLauro told NCR.

DeLauro grew up in an Italian-Catholic family who worked in public service and "made government work for people," she said. Her recent book, The Least Among Us, references Matthew 25, and she quotes Rerum novarum, the Catholic encyclical on labor, during an interview.

"There is a deep, rich Catholic history about social justice and social service," she said. "I took those lessons with me to the Congress."

"There are a lot of complicated things about being a Christian. But the mandate to care for the least is not complicated; it's clear and strong," said Carr. "It applies to each of us, and it's the moral measure of our society."

Said Campbell: "We need to raise up poverty as the seminal issue of our time. It's wrong, in the richest nation of the world, that people don't have a roof over their heads."

But addressing income inequality will require more than merely electing more Democrats during next year's midterm elections. "There has to be a deeper healing in the United States, a deeper sense of caring for each other and listening to each other," said Beckmann.

Those are the guiding principles that will continue to motivate Catholic Charities, regardless of who is president, said Swanepoel. "We respond to people and serve their needs," he said, especially when such issues are politicized.

Perhaps the church could even be a source of healing of the political polarization that plagues the country, with prayer as a strategy for healing ideological divisions, activists say. "That's our job," said Beckmann, "but I'm not sure we've done that well."

A version of this story appeared in the Nov 17-30, 2017 print issue under the headline: Poverty issues gain traction since election .

Korean nun changes the face of Bus-Park slum in Nepal

The myth of upward mobility